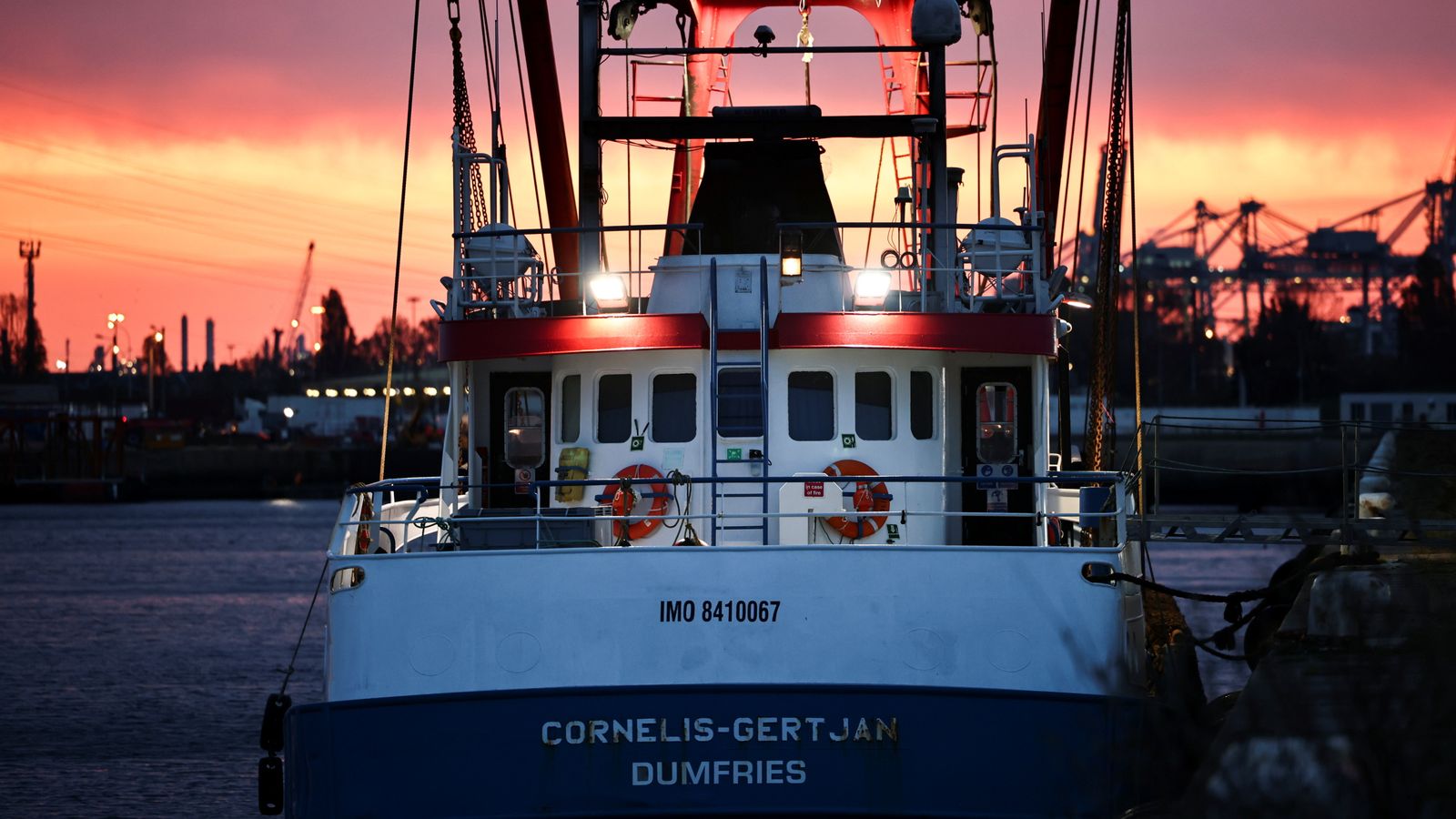 The British trawler, which had been held in France amid the row over post-Brexit fishing licences, has been released.

The vessel, a Scottish-registered scallop dredger called Cornelis Gert Jan, set sail from Le Havre on 3 November after it was detained at a port in northern France last week.

France accused it of fishing in its waters without the correct documents.

Image: The Cornelis Gert Jan leaving the harbour after being held for almost a week. Pic: marinetraffic.com

The public affairs director of the vessel’s owner, Macduff Shellfish, confirmed it has been released by French authorities.

“The court (of appeal) determined that no bond was required for the release of the vessel,” Andrew Brown said.

“We are pleased to have this matter resolved and delighted that our crew and vessel are now able to return home. The crew have acted with calmness and professionalism throughout the entire incident.

“They are in good spirits, looking forward to return to their loved ones and are grateful for all the messages of support received from the British public.”

The vessel’s captain, Jondy Ward appeared at the Court of Appeal in Rouen earlier on Wednesday.

Image: Macduff’s scallop vessel Cornelis was boarded by the French authorities and ordered into the French port of Le Harve. Pic Arjan Buurveld

After the hearing, he said: “If it goes right, we’ll get out of here today.”

French maritime police detained the trawler last week for not being on a European register when it was fishing off the Normandy coast, according to Mr Ward.

Image: Jondy Ward, (left), the skipper of the vessel, appeared at the Court of Appeal on Wednesday

Menna Rawlings, the British ambassador to France, welcomed the release of the Cornelis Gert Jan. “Glad to hear the #Cornelis is free to leave Le Havre and that the Brits on board are on their way home tonight,” she said on Twitter.

“A huge thank you to our @UKinFrance team for their excellent consular support.”

The produce that France says the Cornelis Gert Jan caught illegally in its waters was seized by French maritime police, according to Mathieu Croix, Mr Ward’s lawyer.

Image: Boris Johnson and Emmanuel Macron at the G20 summit in Rome

At the centre of the post-Brexit fishing dispute are the licences for small French boats, which are issued only if the vessels can demonstrate a history of fishing in British waters.

French President Emmanuel Macron had warned that Paris could block British boats from landing their catches in French ports and tighten customs checks in protest against what is claimed is a refusal by the UK authorities to grant licences to French boats.

However, France suspended the threats at the 11th hour with negotiations continuing, a move welcomed by Britain.