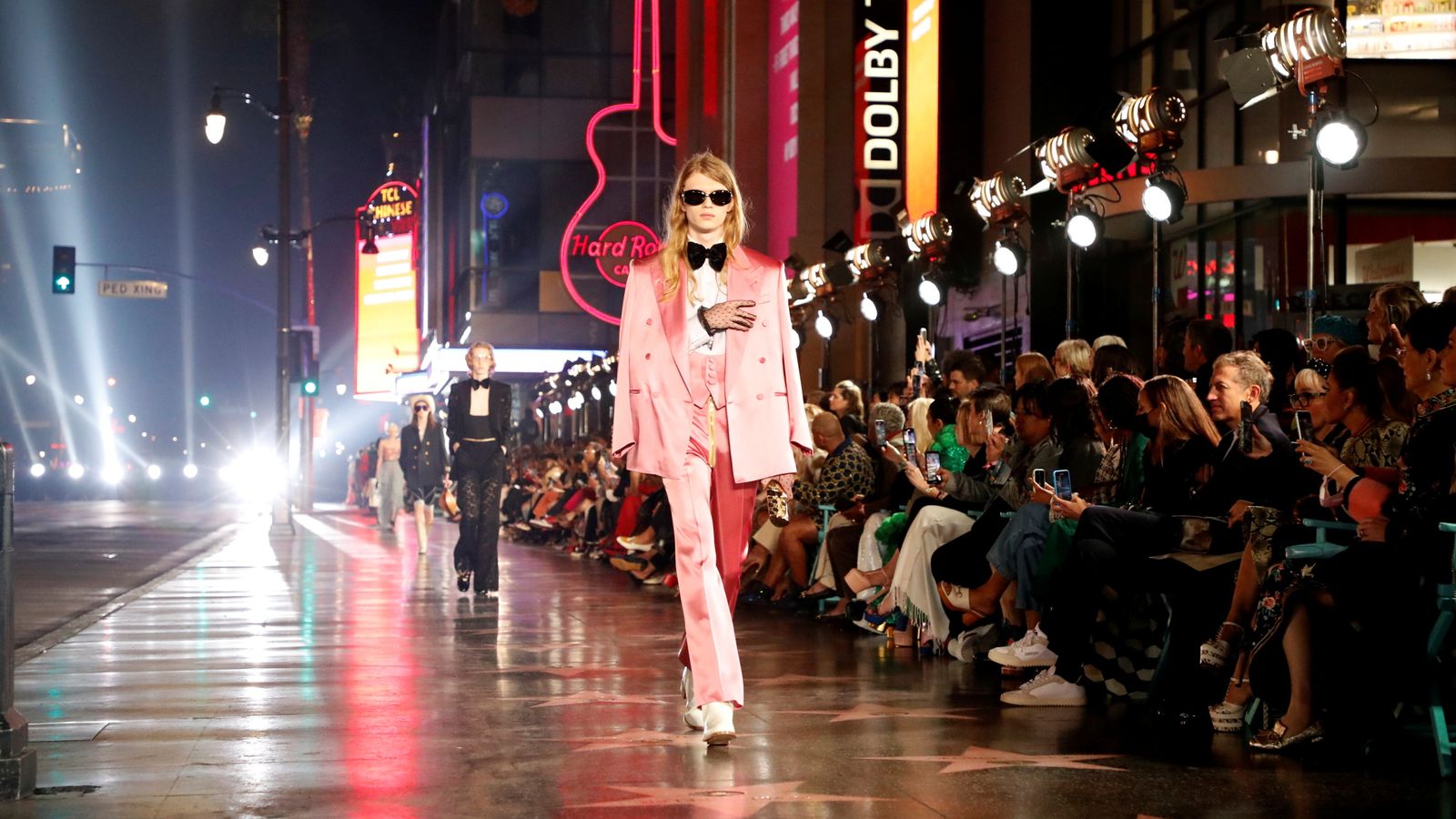 In a show featuring colour, feathers, facial jewellery and plenty of celebrity faces, Alessandro Michele, the creative director of Gucci, presented a nostalgic line with inspirations taken from old Hollywood.

The show on Tuesday evening attracted large crowds causing the event to shut down a few blocks of the busy Hollywood Boulevard, giving the models enough room to strut out of the iconic TCL Chinese Theatre.

The spectacle included appearances both on and off the catwalk.

And Gwyneth Paltrow and Serena Williams were among those spotted on the converted front row.

Colour formed a key part of the show with lavender, teal and hot pink suits along with metallic and gold gowns all making an appearance.

Image: Models walked on Hollywood Boulevard at the conclusion of the Gucci Love Parade fashion show

Star of the upcoming film House of Gucci, Jared Leto hit the catwalk in an oversized double breasted blazer with no shirt, laced leather white trousers and white boots – to applause from the crowd.

Culkin’s attire continued the trend as he wore a colourful jacket with a blue Hawaiian-styled shirt, brown trousers and a white Gucci belt.

The more size inclusive show saw models ranging from small to plus size grace the catwalk.

“I think with fashion, you have a duty to give a voice,” Michele said after the show. “I see beauty everywhere. It’s something which is organic and natural.”

Image: Hollywood Boulevard became the catwalk for the Gucci’s show on Tuesday night

When asked about his choice of venue he spoke of his childhood and the memories he had of his mother’s stories. She was an assistant at a production company and his introduction to the glitz and glamour of Hollywood.

The choice to hold the show on Hollywood Boulevard reflected his “uncurbed love for the classic world”. He said: “It’s a bit like home.”

“It’s a place I love,” he added. “There are elements that are close to me and my heart. This city is an inspiration.”

COP26: Police in two-hour stand-off with ‘greenwashing’ protesters in Glasgow