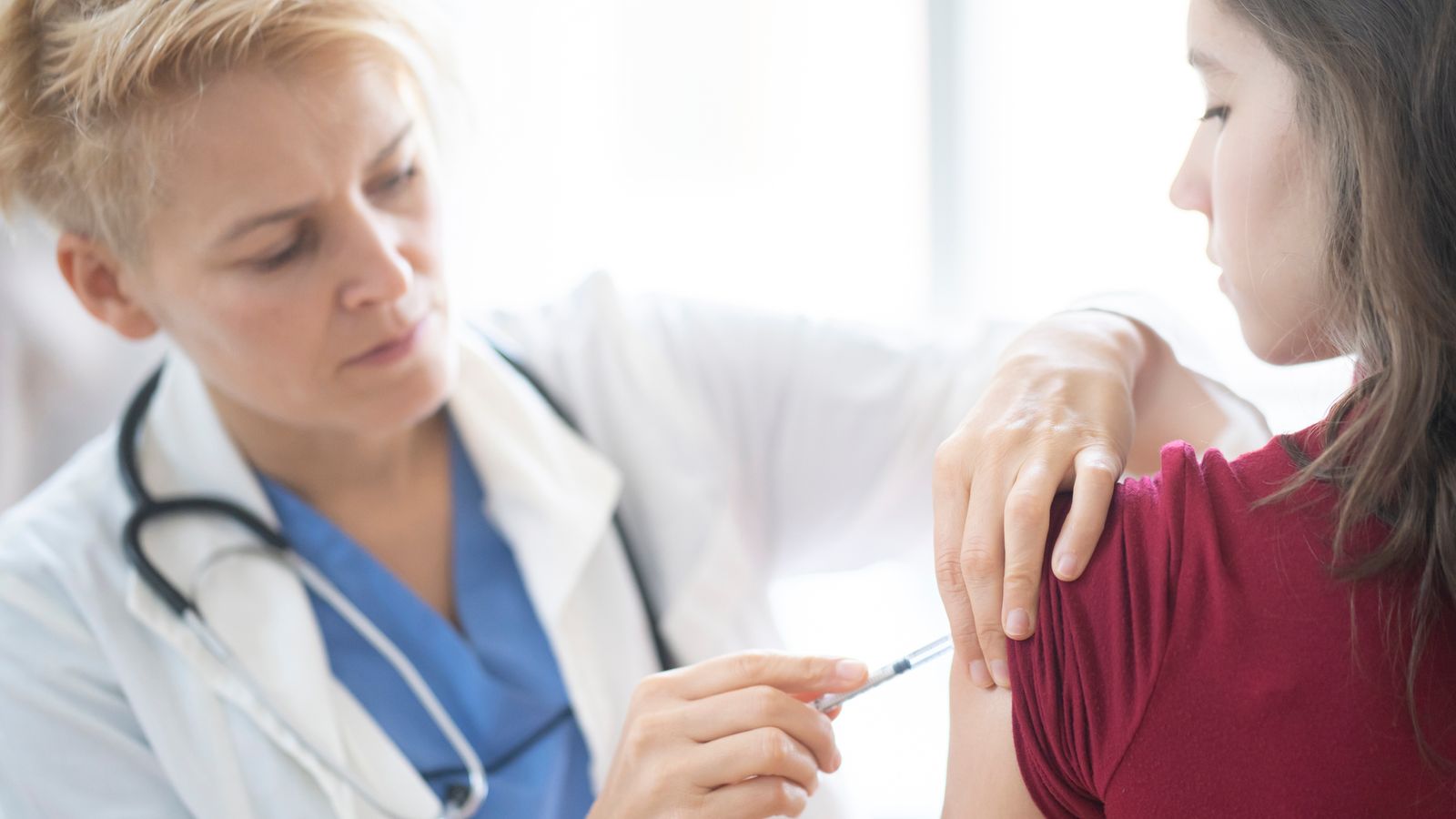 Cervical cancer rates are almost 90% lower in women vaccinated against HPV, a new study has found.

Women offered the vaccine between the ages of 12 and 13 were found to have cancer rates 87% lower than in previous generations, according to a study published in The Lancet.

Researchers also found a reduction of 62% in women vaccinated between ages 14 and 16.

The first generation of women, who were offered “catch-up” jabs aged between 16 and 18, were found to have a 34% reduction in cervical cancer rates.

Professor Peter Sasieni, from King’s College London and one of the authors of the paper, told Sky News some of the results were “almost too good to be true”.

“Everything is on target to be preventing essentially all cancers from HPV 16 and 18 in vaccinated women,” he said.

He said there was also “some cross-protection” for other cancers caused by the human papillomavirus and “some protection, although much less, to women of the same age who are not actually vaccinated”.

He continued: “There is a lot of vaccine hesitancy going on these days.

“People who are opposed to these vaccines can no longer say this vaccine doesn’t prevent cancer because this makes it absolutely clear it is having a dramatic effect on cervical cancer incidents.”

With COVID-19 vaccination now taking place in schools, he said there are pressures to move HPV jabs from the autumn to the summer term.

“We need to think about the impact that will have,” he said.

“People don’t come in because they are revising, or they only come in for exams. So to get the same uptake of the vaccine will be challenging – as I am sure it has been challenging the last year and a half because of COVID.”

HPV vaccination has been introduced in 100 countries as part of efforts by the World Health Organisation (WHO) to eliminate cervical cancer.

It is a common sexually transmitted infection, with some types being linked to cervical cancer in women and head and neck cancer in men.

The English HPV vaccination programme was introduced in 2008, with vaccines given to women aged between 12 and 13 and “catch-up” jabs offered to older age groups up to the age of 18.

England initially used a bivalent vaccine, which protects against the two most common types of HPV, responsible for approximately 70% to 80% of all cervical cancers. Since September 2012, the quadrivalent vaccine Gardasil has been used instead.

The study looked at the population-based cancer registry data between January 2006 and June 2019 for seven cohorts of women, aged between 20 and 64.

Image: Women offered the vaccine between the ages of 12 and 13 have an 87% reduction in cancer rates

In the three vaccinated cohorts, there were just 638 cases of cervical cancers and 18,662 cases of CIN3 compared to the non-vaccinated population.

Prof Sasieni said cases in young women were “very traumatic on everyone”.

“When talking to colleagues who treat women, they always remember the young ones and sometimes it is very aggressive and they can’t help that much,” he said.

One of the benefits of such an effective vaccine, he said, could mean women require less cervical screening, adding: “It doesn’t make sense to say you need to continue screening in the same way.”

Image: In the three vaccinated cohorts, there were around 450 fewer cases of cervical cancers

But he said until the policy was changed, “the last thing we want is for women to think, I have been vaccinated so I don’t need to attend my screening – because that could have really serious consequences”.

The authors of the study did acknowledge some limitations – principally that cervical cancer diagnosis is rare in young women. Because the vaccinated populations are still young, the authors also stressed this means that it is still too early to assess the full impact of HPV immunisation on cervical cancer rates.