Insulate Britain protesters glue themselves to roads outside Parliament 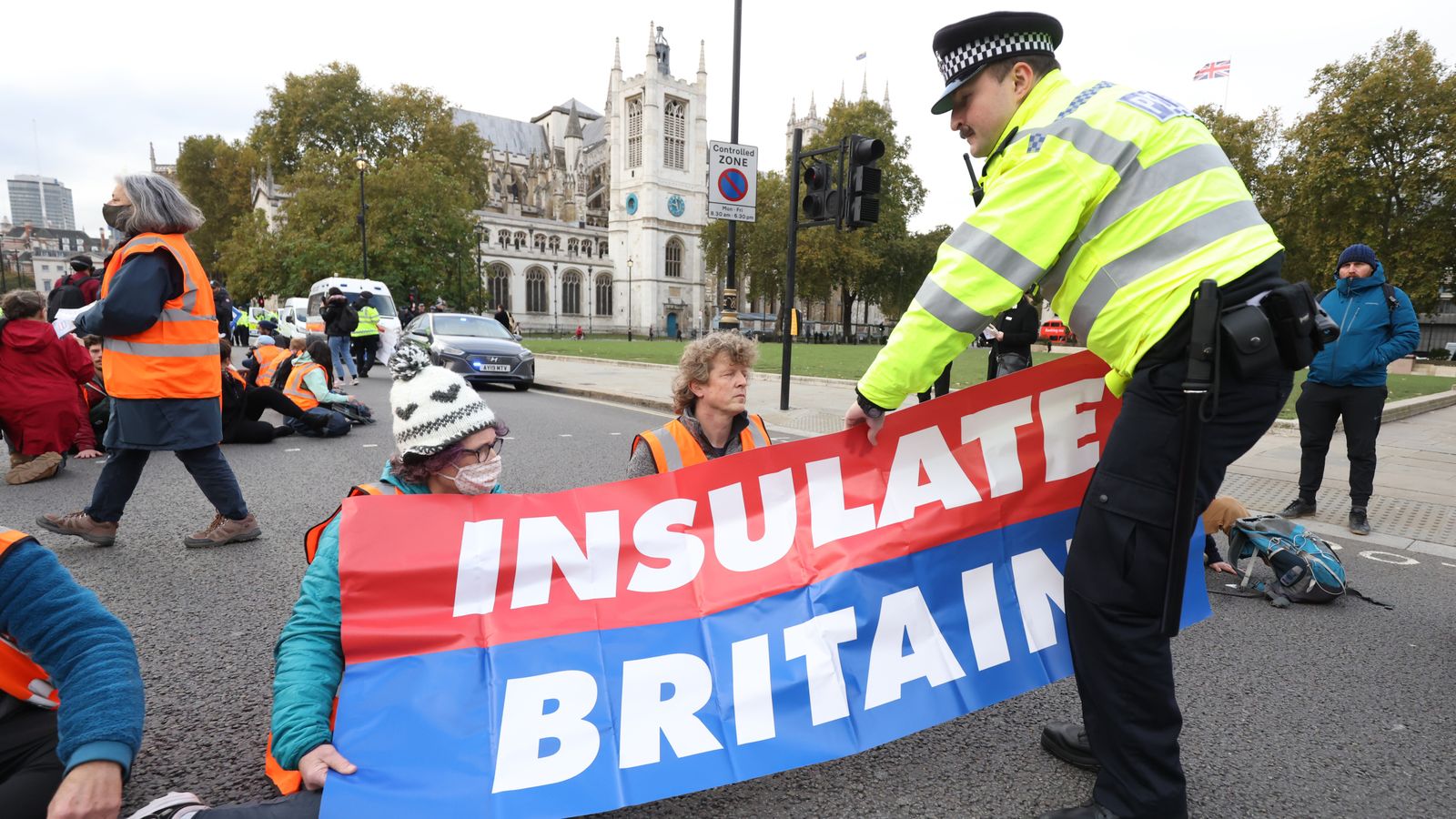 Insulate Britain protesters have blocked two roads outside Parliament in central London as dozens glued themselves to the ground in fresh protests over the climate crisis.

The environmental group said 62 members sat on the floor while holding banners to the southeast of Parliament Square and at the Peers’ entrance to the Houses of Parliament.

Around 30 demonstrators also glued themselves to the ground as part of the group’s ongoing rallies on roads across the UK.

Image: A police officer attempts to remove Insulate Britain protesters as they block a road at Parliament Square Image: Police remove protesters from the latest demonstration in central London

Transport Secretary Grant Shapps told the Commons that “475 injunctions have been served to protesters at their homes for contempt of court” in relation to Insulate Britain protests.

The Metropolitan Police said officers were at the scene and “working as quickly as possible” to get traffic flowing again.

More on Houses Of Parliament

Paul Sheeky, a protester from London, said: “We have been out on the road now for several weeks and a lot of the time the drivers say to us ‘this is not the right way to be doing this, go to Parliament, protest there’.

“We thought we would take that advice and give it a go. We know from protesting in Parliament in the past it doesn’t work, which is why we have to protest on the roads, but we thought we would come here all together as a show of unity just to say, yes we are going to keep going.”

We are continuing to respond to a protest in Parliament Square this morning where a number of activists have sat on the road, blocking traffic.

Officers are on scene and are working as quickly as possible to get traffic flowing again. pic.twitter.com/MnbXzvTrIh

The group earlier published a statement reflecting on its campaign.

It said: “Insulate Britain has been one of the most successful campaigns in history. Our name recognition went from zero to 77% of the public in three weeks, we have attracted enormous media interest and we have started thousands of conversations, in the press, on social media and in homes up and down the country.

“Importantly, we have exposed the government’s refusal to act on home insulation as cowardly and vindictive and their refusal to protect our country and our children from the climate crisis as genocidal and treasonous.”

Image: Members of the group blocked Great George Street in Parliament Square Image: The demonstrators blocked two roads on Thursday Image: A protester from Insulate Britain speaks to a motorist during the rally on Thursday

A 79-year-old vicar was among those arrested on Tuesday as some 60 demonstrators descended on junction 23 of the M25 near London, junction 6 of the M56 in Manchester, and the A4400 in Birmingham.

The roads in London and Manchester were covered by a super injunction granted last week to National Highways and are part of the strategic road network.

Image: Members of the group held up banners as they sat on the road Image: A police officer speaks to protesters from Insulate Britain as they block Great George Street in Parliament Square Image: Some protesters glued their hands to the road

Around 161 protesters have been involved in the roadblock campaign so far, with more than 800 arrests.

Nine Insulate Britain members are due to appear at the High Court on 16 November after breaching a National Highways injunction.

Mr Shapps said Insulate Britain protesters were “preventing members from getting into the chamber which is completely unacceptable”.

He said: “When it gets to the point that protesting against climate change prevents members from this House getting here to hold ministers to account and be heard it is clearly counter-productive.

“Contempt of court can lead to unlimited fines, and prison sentences. And we will be acting where the law has a gap in it through the Police and Crime Bill to resolve the gap that has led to this.”