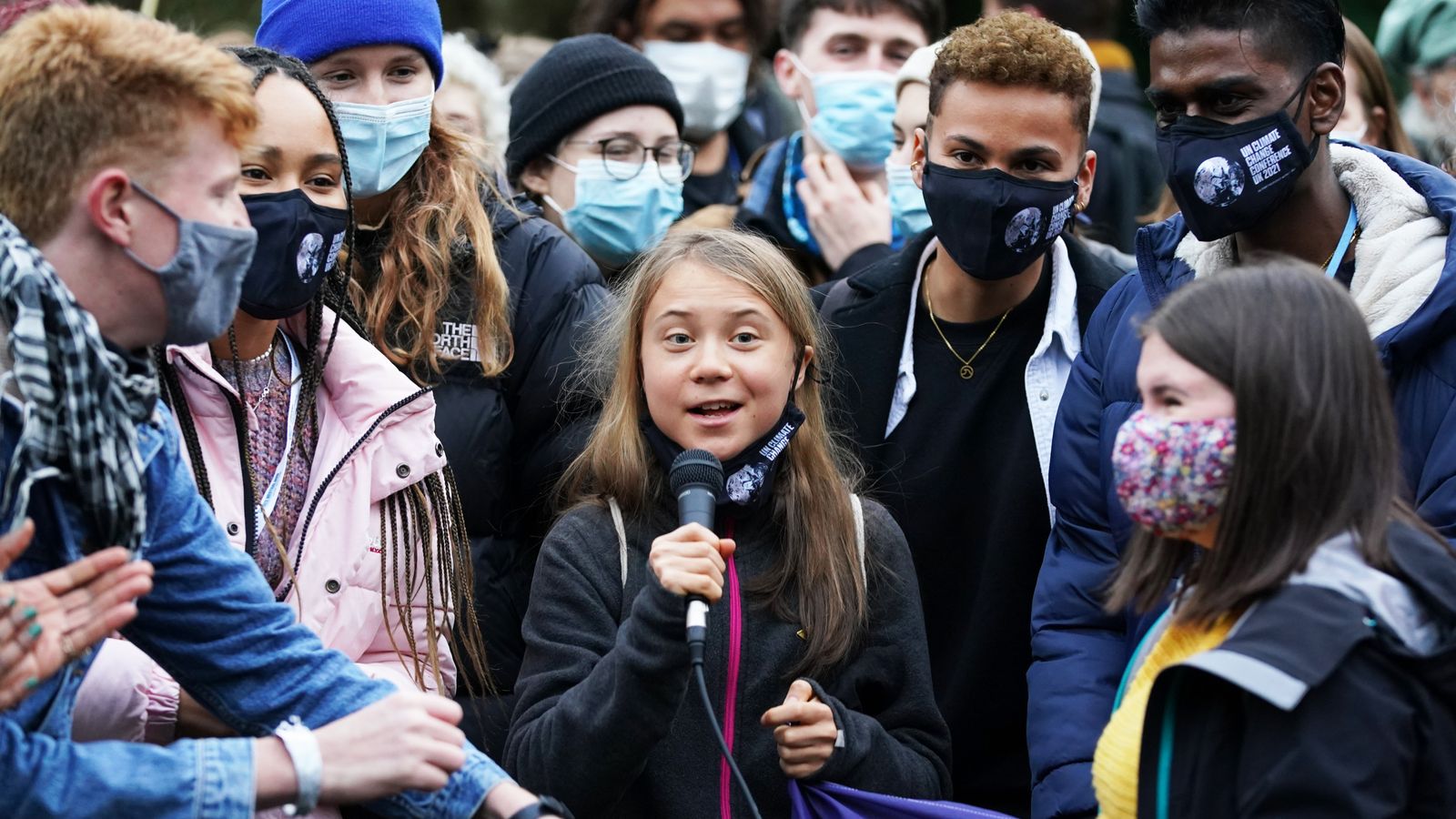 Pupils are to be recognised for their climate action in a new scheme to be announced on a day when youth activists will protest at COP26.

On the fifth day of the climate summit in Glasgow, ministers are to unveil a Duke of Edinburgh-style award scheme which will praise students for their work in protecting the environment.

Image: Nadhim Zahawi will reveal details of the initiative on Friday

The announcement will come as teenage climate activist Greta Thunberg is expected to be joined by 100,000 protestors in the city to march in a call for leaders to take meaningful international action on climate change.

Urging others to join her in a post on social media last month, Ms Thunberg said: “On Friday 5 Nov I’ll join the climate strike in Glasgow, during COP26. Climate justice also means social justice and that we leave no one behind. So we invite everyone, especially the workers striking in Glasgow, to join us. See you there!”

Despite not being officially invited to the summit, Ms Thunberg arrived at the conference by train along with 150 youth activists earlier this week.

Education Secretary Nadhim Zahawi is expected to set out a series of measures designed to put climate change at the heart of teaching in his speech at COP26 on Friday.

Climate change is already taught in science and geography lessons in England, but teachers will be further supported to teach children about nature and their impact on the world around them through a “model science curriculum” from 2023, the Department for Education (DfE) said.

Pupils will also be able to take part in the Climate Leaders Award, with levels such as bronze, silver, and gold, similarly to the Duke of Edinburgh scheme, which allows young people access to volunteering.

A national awards ceremony for the scheme will be held every year, DfE said.

3:36 Can we rely on renewable energy?

From December, all further education teachers trained via an apprenticeship will be told to integrate sustainability into their teaching.

The measures, encompassed in a draft sustainability and climate change strategy, will be built over the next six years in collaboration with young people, educators, sustainability experts and environmentalists, DfE said.

The finalised strategy will be published in April 2022.

Highlights from COP26 so far

• At least 23 nations say they will phase out coal power in 2030s or 2040s depending on size, including Indonesia, Vietnam, Poland, and Ukraine

• South Africa, the most coal-intensive economy in the G20, will get $8.5bn to help decarbonise from the UK the EU, the US, France and Germany, in an innovative partnership that shows how side deals agreed outside of the traditional UN process can help close the emissions gap.

• Scores of world leaders signed a pledge to slash potent climate heating gas methane by 30% by 2030, a gas that could significantly help slow short term warming

Speaking ahead of his panel session with education ministers from around the world at COP26 on Friday, Mr Zahawi said he wants to deliver “a better, safer, greener world for future generations of young people” and that education is one of the “key weapons” to do so.

“Empowering teachers in every school to deliver world-leading climate change education will not only raise awareness and understanding of the problem, but also equips young people with the skills and knowledge to build a sustainable future,” he said.

“The COP26 summit has further amplified the UK’s commitments to become a world leader in sustainability right across the education system by engaging young people and bringing them on our journey towards net zero and a green future.

“It goes beyond the classroom – our National Education Nature Park and Climate Leaders Awards will let pupils get hands-on experience of understanding, nurturing and protecting the biodiversity around them.”

James Bowen, director of policy for school leaders’ union (NAHT), said there is a “huge amount of good working already taking place in schools” but added that “a coherent national strategy is essential if we are to see real impact”.

“The government must be truly ambitious, not just looking to new buildings, but also at how the existing school estate can be made as environmentally-friendly as possible,” he said.

Mr Bowen added: “It’s vital that any work on a new model curriculum is developed in close consultation with the profession and builds on the excellent work already taking place.”

Image: Extinction Rebellion activists have been protesting in Glasgow

Mr Barton added: “It is very clear that children and young people rightly want to see far more concerted action from policy-makers to address the climate emergency. They are fed up with platitudes and will be hoping that COP26 delivers real progress.”

Meanwhile, schools, colleges and nurseries will be encouraged to improve the biodiversity of their grounds and Mr Zahawi will confirm plans to pilot “energy pods” that can replace gas and coal boilers and supply a school’s heating and hot water without any carbon emissions.