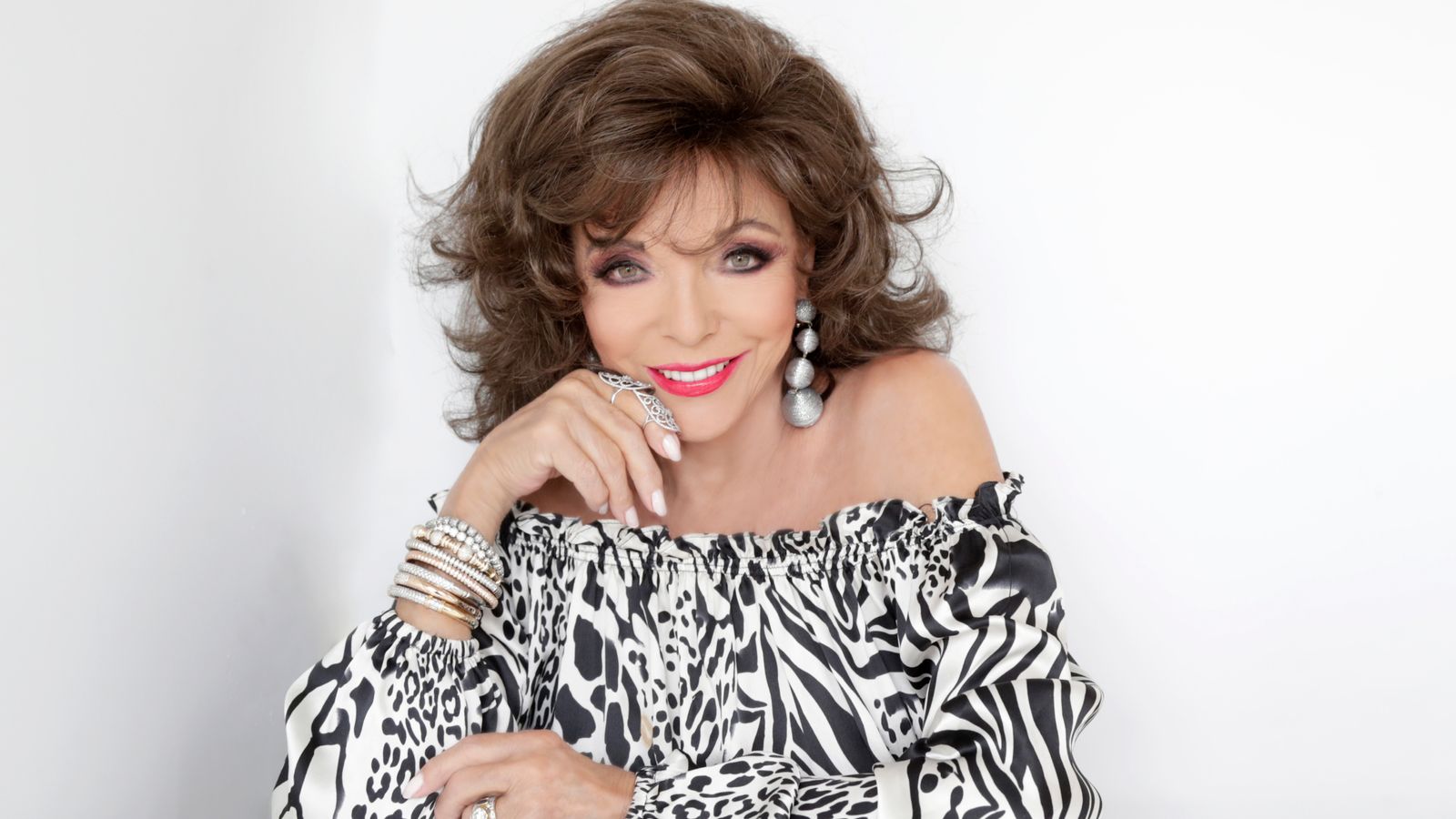 We would expect nothing less. From starting out during Hollywood’s Golden Age to playing one of the most iconic TV characters in the 1980s, Dame Joan has lived through 70 years of showbiz – and has a lot to say about it.

Her new memoir, My Unapologetic Diaries, is a collection of the star’s “uncensored” diary stories kept throughout her life, witty and withering in its assessments of quite a few famous faces, from Boris Johnson to Donald Trump.

Speaking to Sky News at the Royal Lancaster Hotel in London, Dame Joan says she often recorded the events of her life but never expected her musings to be published.

“I had this tiny tape recorder and I used to use it when I was working on Dynasty to learn my lines,” she says. “And the last day of when we are filming Dynasty, it’s nine years, and I’ve got it in my hand and I think, ‘what am I going to do with this?'”

The star made a message to say goodbye to the show and from then on pressed record whenever she had a story to tell. And she has never been afraid of making her opinions known.

She says: “Obviously when one meets people, one isn’t always going to say they are the rosiest, most fabulous person I’ve ever met. Because how boring is that?”

While many modern celebrities can be afraid to speak out due to fears of cancel culture and saying the wrong thing, Dame Joan says she mostly doesn’t care what people think.

“I love seeing people’s opinions,” she says. “I mean, that’s what makes a good debate when you can talk. But it seems that debates are a thing of the past. Now you can’t have debates.”

The book tells of encounters with A-listers and politicians. Her opinion of Mr Trump, she says, changed over the years.

“Who did charm me for a while was Donald Trump when I first met him because his [then] wife, Ivana, was a very good friend of mine because she was always in the south of France,” says the star. “He gave a party for me because I had a perfume out, he gave a party at Trump Tower. But then the next few times that I met him, he certainly did not.”

In the memoir, Dame Joan writes about wanting to use stunt women and the importance of choreographing fights on stage as well. It’s an extract that resonates following the tragic death of cinematographer Halyna Hutchins, who was accidentally shot by star Alec Baldwin on the set of the film Rust in October.

“Look what just happened, last month, with the gun,” she says. “I’d work with guns in films and every single time – and I don’t like guns – I’ve been given a gun, I said to the prop man, ‘please open it up in front of me so I can see inside to see that there’s nothing in it’.”

There is “far too much shooting, too much violence” in film these says, she says.

“I cannot imagine,” she adds, of what Baldwin is going through. “It must be hell.”

Following the rise of the #MeToo movement in Hollywood, Dame Joan also has something to say about inappropriate behaviour, and worse, on sets.

“Kick him in the groin,” was her approach, she says. “That’s what my father told me, my father was an agent. He knew there were predatory men, out for young girls.”

As we’re speaking while the COP26 climate summit is taking place in Glasgow, talk turns to environmental issues.

The star, who played the ex-wife of an oil tycoon in Dynasty, says a wind farm tycoon might not have had the same effect if the drama was being made for a more environmentally conscious audience now. “That was the ’80s,” she says. “Life has moved on.”

Celebrities, though, should cut down on the private jet use, she says.

“Yeah, I think so. Not just celebrities, did you see the amount of cars that Joe Biden had [for COP]? I counted at least 10 cars and then there were more coming, it’s ludicrous. Were they all sent from America?”

And we love you for it, Dame Joan.