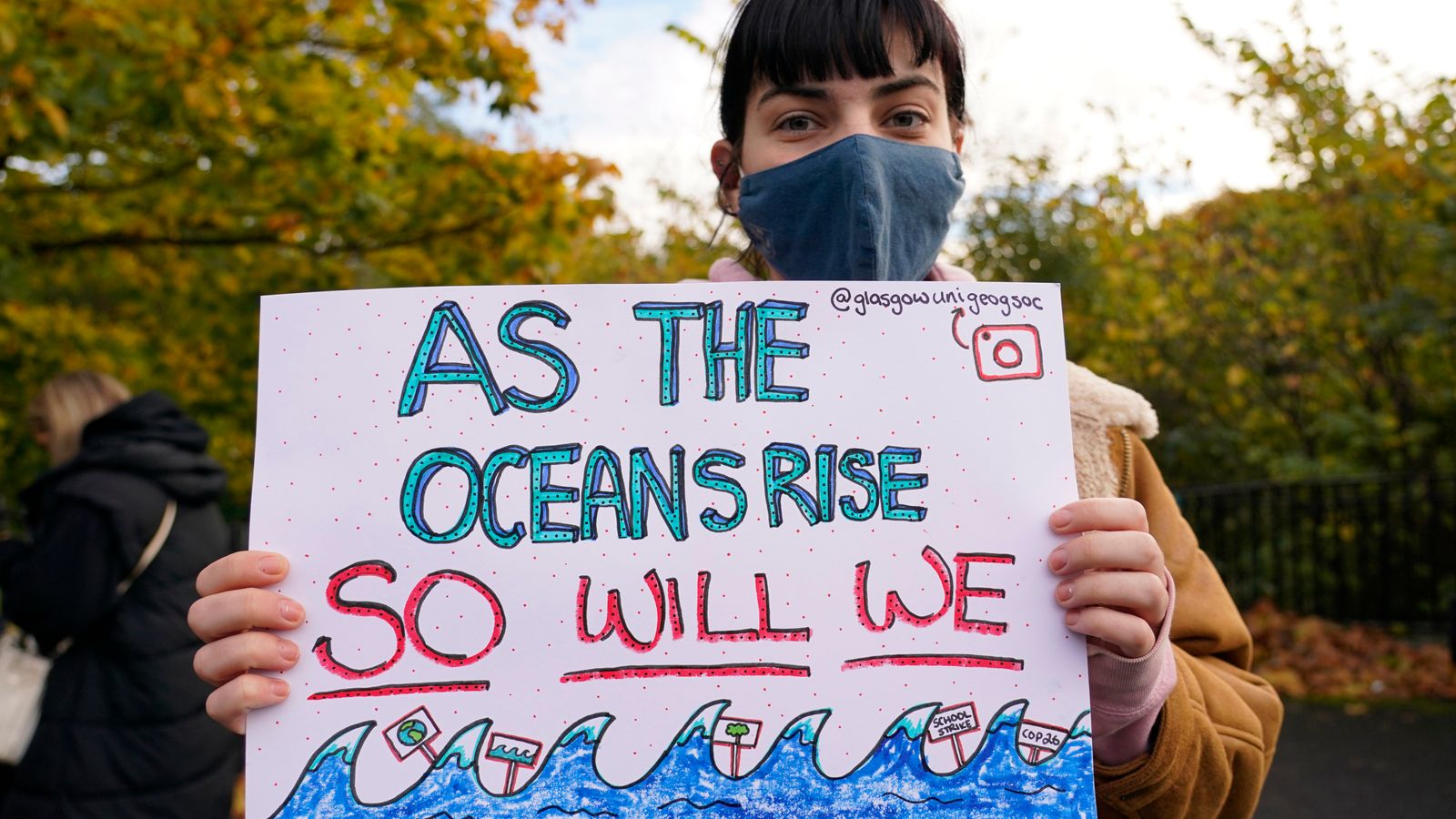 As the UN Climate Conference continues, thousands will take to the streets in Glasgow today, alongside millions more in other towns and cities across the world, in a Global Day of Action against climate change.

In Glasgow, a crowd will march to the city for a rally in the afternoon where teenage climate activist Greta Thunberg address tens of thousands of climate campaigners as the city hosts the COP26 summit.

Image: More protests are expected to take place in Glasgow and around the world on Saturday

Dozens of roads across the city centre will be closed from the early morning, with between 50,000 to 100,000 people expected to be in attendance.

Representatives of the Stop Cambo campaign – who are calling for an end to the proposed new oil field west of Shetland, thought to contain 800 million barrels of oil – are also believed to address protesters.

Police have warned they will deal “swiftly and robustly” with any violent disorder or damage to property during planned COP26 protests in Glasgow.

Police Scotland assistant chief constable Gary Ritchie said officers have engaged with key campaign groups to ensure the protests can take place safety, but they will quickly crack down on any problems if need be.

The Glasgow events are a few of 250 simultaneous actions planned by march organisers across the world.

Image: Saturday’s COP26 theme will be nature – underlying the importance of the natural world and sustainable land use

Elsewhere in the UK, protests include a march from the Bank of England to Trafalgar Square in London.

The protests come at the end of the first week of the conference, where countries are under pressure to increase ambition on cutting greenhouse gas emissions and to ensure finance for poor countries to tackle the crisis.

Earlier in the week, world leaders gathered in Glasgow to unite around pledges to try to limit global warming to 1.5C.

Highlights from COP26 so far

• At least 23 nations say they will phase out coal power in 2030s or 2040s depending on size, including Indonesia, Vietnam, Poland, and Ukraine

• South Africa, the most coal-intensive economy in the G20, will get $8.5bn to help decarbonise from the UK the EU, the US, France and Germany, in an innovative partnership that shows how side deals agreed outside of the traditional UN process can help close the emissions gap.

• Scores of world leaders signed a pledge to slash potent climate heating gas methane by 30% by 2030, a gas that could significantly help slow short term warming

On Friday, the Glasgow summit discussed youth and public empowerment and Ms Thunberg was among thousands of protesters on a march.

Many of those in attendance were young people who took part in a rally in George Square on COP26’s Youth Day.

Prince Charles turned down an invite to join the rally, saying that taking part would be “difficult”.

But, the next in line to the throne said he sympathised with the “frustration” of the younger generation in a speech to COP26 negotiators, telling them the “weight of history” is resting on their shoulders.

Speaking at the Fridays for Future rally in Glasgow, Ms Thunberg insisted that COP26 is already a “failure.”

She said: “It should be obvious that we cannot solve a crisis with the same methods that got us into it in the first place.

“Many are starting to ask themselves: ‘What will it take for the people in power to wake up?’

“But let’s be clear, they are already awake. They know exactly what they are doing.”

1:15 Vanessa Nakate: ‘We’re in a disaster that’s happening every day’

She added that world powers are not doing “nothing”, but “actively creating loopholes and shaping frameworks to benefit themselves and to continue profiting”.

Ms Thunberg continued: “This is an active choice.”

The Swedish activist said COP26 has turned into a “PR event where leaders are giving beautiful speeches and announcing fancy commitments and targets”, adding: “While behind the curtains the governments of the global north countries are still refusing to take any drastic climate action.

“It seems like their main goal is to continue to fight for the status quo.”

Ms Thunberg is expected to give another speech on Saturday.

Saturday’s COP26 theme will be nature – underlying the importance of the natural world and sustainable land use.