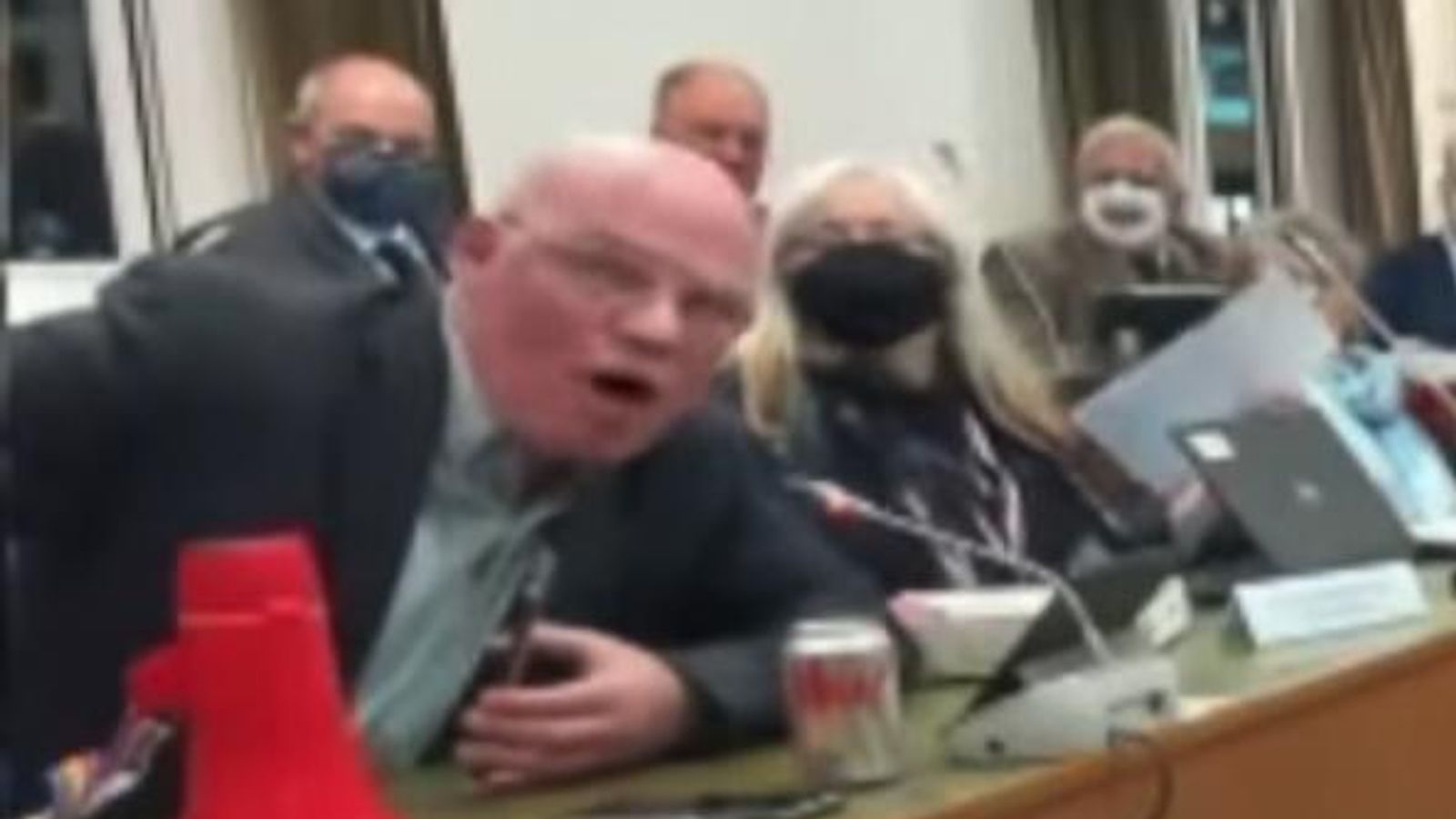 Police officers were called to a local council meeting after a member, who brought a megaphone with him, repeatedly interjected the proceedings.

The meeting of Maldon District Council, which took place on Thursday evening, was abandoned after several frustrated members walked out.

After arriving at the scene, police deemed independent councillor Chrisy Morris to be “breaching the peace” – but no arrests were made.

Image: The entire debacle was recorded

Councillor Morris repeatedly interrupted shouting “point of order” during the meeting as the chairman tried to move on.

Those at the meeting of the Essex local authority were, amongst other things, discussing sanctions against Mr Morris after the council’s joint standards committee deemed that he had brought the authority into disrepute following two independent investigations.

Minutes of the meeting state that Mr Morris was found to have previously disclosed confidential information.

While livestreaming the event on social media, the independent councillor repeatedly disputed the findings, ensuring his point was heard loudly and clearly.

After continuously interjecting over council chairman Mark Heard, Mr Morris was asked to leave the meeting just ten minutes into the session.

Asked to be quiet by Mr Heard and told that he had “no right to speak here”, Mr Morris said that he “will be heard” and has “every right” to make his point.

“This is democracy. You might not like me, but you have got to listen to me,” the independent councillor said.

Police officers then arrived at the scene and tried to persuade Mr Morris to leave.

“I’m not interested in what you’ve got to say, I’m trying to conduct a meeting here so I’m very pleased to see these officers,” Mr Heard said.

Then an officer states to Mr Morris: “At this time you’re essentially breaching the peace.”

Visibly unhappy at the request to depart the premises, Mr Morris then tells the officers: “You guys shouldn’t be getting involved in politics.”

He adds that he is “legally entitled to be here”.

After a pause, the meeting then reconvened – but Mr Morris continued to interject, requesting a point of order.

Chairman Mr Heard then asked the members to leave in protest and the meeting ended prematurely with several pieces of business unfinished.

Image: The police were called after the meeting descended into chaos

In a statement regarding the incident, Wendy Stamp, leader of Maldon District Council, said: “Enough is enough. The public may be seeing councillor Morris’s disruptive behaviour for the first time at last night’s council meeting.

“However, this has been a regular occurrence and we cannot tolerate this type of behaviour any longer and put members and staff through any further distress. Our focus as a council is to provide services to residents and to act as the democratic voice.”

The statement went on to say Mr Heard “was concerned for the duty of care of staff present who have continued to be the target of aggressive, intimidating behaviour from councillor Morris”.

Speaking after the meeting, Mr Morris told the BBC he had no regrets.

“What I said I needed to say; it was very simple, I had a point of order which the chairman should deal with as soon as it’s brought to his attention,” he said.

“They wouldn’t allow [my point of order], which was undemocratic in itself.

“I’m a democratically elected representative. I’ve got the right to speak. I’m there to speak and I simply have not been allowed to speak.”

The heated scenes may remind many of the meeting of Handforth Parish Council meeting where clerk Jackie Weaver became an overnight internet sensation after attempting to calm down the fiery zoom session.

During the tense meeting of Handforth Parish Council, then-chairman Brian Tolver told stand-in clerk Ms Weaver that she had “no authority”.

Ms Weaver then proceeded to kick Mr Tolver, and two other members from the meeting, out of the call – placing them in a virtual waiting room.