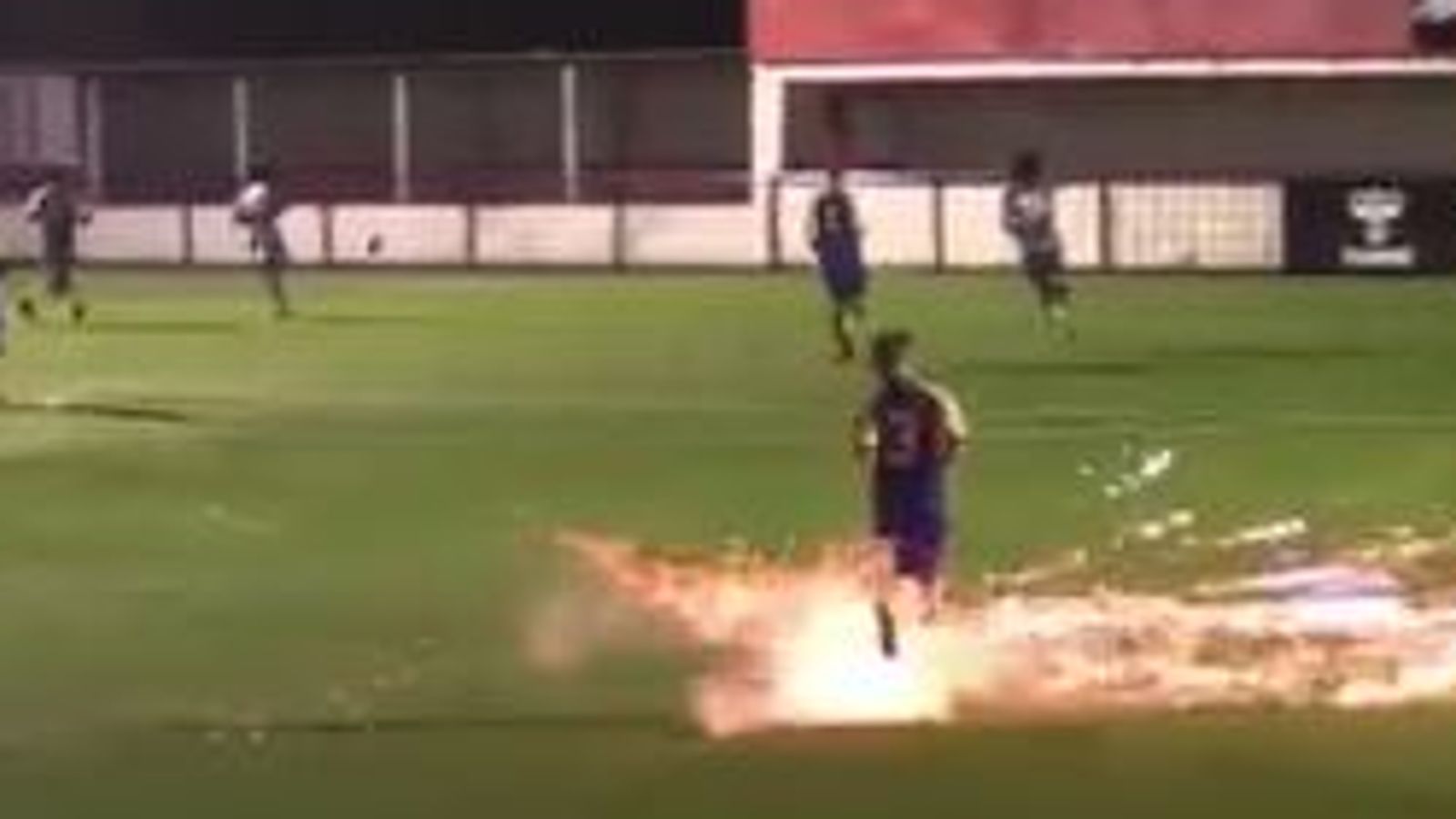 A football match had to be abandoned after a firework exploded on the pitch and struck one of the players.

Footballer Matas Skrna narrowly avoided serious injury after the firework landed near him on the turf, with the sparks from the explosion striking his legs.

He collapsed to the floor clutching his legs and was surrounded by concerned teammates.

We expect fireworks whenever @hashtagutd play but not like this!

Our player, Matas Skrna, is luckily ok but this could have been bad!

Game abandoned at 2-0 up as house where fireworks came from refused to stop. Two more landed near pitch. Police have been notified. Stay safe. pic.twitter.com/YP22OaLDb6

“We expect fireworks whenever @hashtagutd play but not like this!” the club tweeted.

“Our player, Matas Skrna, is luckily ok but this could have been bad!”

A further two fireworks landed near the pitch and the match at the Len Salmon Stadium in Basildon, Essex, was abandoned, with Hashtag United’s reserves leading 2-0.

The club, which plays in the Isthmian League north division, said police had been notified about the incident.

YouTuber Spencer Owen, who founded Hashtag United in 2016, tweeted that “a few inches different and our lad could have been blinded”.

“Yet another reason to add to the list of reasons to sack off fireworks,” he added.

A club spokesperson said that a volunteer had gone to a nearby house and asked if they could halt their fireworks.

They said the household carried on with their display, which led to the match being abandoned, after which the fireworks stopped.

Another football match was disrupted by fireworks on Friday when Waterford’s game against Shamrock Rovers in the Irish Premier League was temporarily halted.

Television footage of the match showed several fireworks exploding above the pitch and showering the players.

We’re trying to trace a @HullCity fan who threw a flare at today’s game against @BarnsleyFC. They threw a flare in to the crowd and it hit another Hull City fan, a 7 year old, in the face.

Thanks for your help. We’ve tagged the right club this time! https://t.co/uUNyt96lGN

Meanwhile, on Saturday, a seven-year-old football fan was injured after being struck in the face by a flare that was thrown into the crowd.

South Yorkshire Police said it was hunting for a Hull City fan who threw the flare during the team’s away match with Barnsley at Oakwell Stadium.

The force said the incident happened shortly before half-time and the child suffered minor injuries.

Officers are reviewing CCTV footage and have urged anyone who knows who was responsible to contact them.