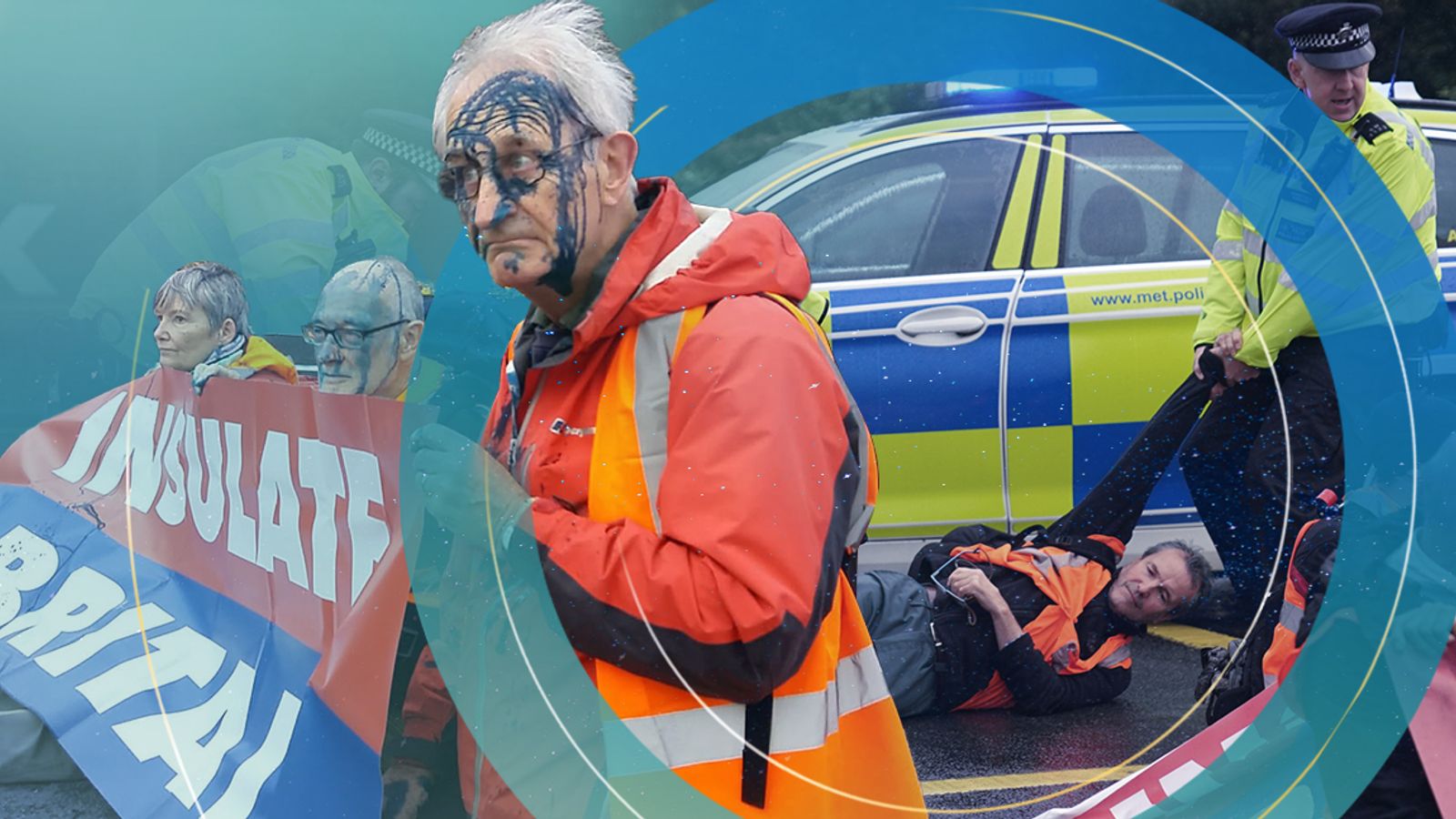 They have infuriated motorists by bringing traffic to a standstill and dozens of their activists are facing possible jail sentences over their road-blocking antics.

But climate activists from Insulate Britain have warned the public that more disruption is on the way – and new tactics are being discussed by the controversial campaign group.

“What the public needs to understand is: we will keep fighting,” Insulate Britain spokeswoman Tracey Mallaghan tells Sky News.

“We work on a week-by-week basis. Not one of us thought we’d get away with more than two or three weeks of this.

“We all, genuinely, were prepared to go to prison.”

Thirty-two Insulate Britain protesters are set to face court for breaching injunctions imposed to stop their demonstrations, which have repeatedly targeted the M25 as well as roads in Manchester, Birmingham, Dover and London since September.

Nine protesters will appear at the High Court on 16 November when they could receive a maximum penalty of two years in prison or an unlimited fine.

Craig Scudder, a former City broker who campaigns with Insulate Britain, says the group plans to continue blocking roads but is considering new tactics for their next protests, including targeting parts of the country yet to face disruption.

“It may be that over the coming weeks you see us around the country more,” he tells Sky News.

“We’re looking at other tactics. We don’t want to be a one-trick pony.

“You haven’t seen the end of Insulate Britain.”

Image: Police officers remove an Insulate Britain protester from a road near parliament

One protest will take place outside the High Court in London on 20 November to show that Insulate Britain “won’t be cowed by the government threatening to lock us up”, Mr Scudder says.

“As far as the public is concerned… it’s time to pick a side in this,” he says.

“I’ve got so many friends who say: ‘I totally agree with what you’re trying to do here, but sitting in the road?’

“In the same way that past generations were asked: ‘What did you do in the war?’, I think people are going to be asked what they did in this critical point in history.

“If you care about this, then it’s time for you to step up. You need to join us.”

Image: Protesters from Insulate Britain have glued themselves to roads

Insulate Britain, which is calling for better insulation for UK homes to help tackle the climate crisis, staged their latest protest on Thursday as activists blocked roads outside parliament in London.Many demonstrators had glued themselves to the ground.

Commons Speaker Lindsay Hoyle said it was “totally unacceptable” that the group was “interfering with democracy”, while Tory MP Adam Afriyie, who was delayed by the demonstration, branded the protesters “reprobates” who are “doing their service no good whatsoever”.

Ms Mallaghan, who has taken part in the road-blocking protests, admits she was initially reluctant to cause disruption to the public but believes it is achieving its aim.

“We have to disrupt enough ordinary people that the media have no course but to give us time to talk,” the former school nursing assistant tells Sky News.

“I hate it. It’s horrible. But the bigger situation is even more horrible.”

In recent weeks, protesters have had ink thrown on them and have been dragged off roads by angry members of the public.

There was also outrage when a man said his mother was left partially paralysed from a stroke after getting stuck in six hours of traffic caused by the group.

Mr Scudder claims Insulate Britain protesters are “not out to target motorists” but the group – an off-shoot of Extinction Rebellion – is taking “disruptive action so people sit up and take notice”.

“Nobody – not one person in Insulate Britain – wants to cause inconvenience to the public,” he says.

“We know that direct action that inconveniences people works.

“It has worked throughout the 20th and 21st centuries on a number of other issues; from civil rights to fuel protests.”

However a YouGov poll on Insulate Britain suggested the public’s patience and support is waning.

Some 72% of Britons surveyed in October said they opposed the group’s actions, up 13 percentage points on a poll the previous month, while almost three quarters (73%) felt that kind of protest damages the public’s perception of the climate change movement.

• What are Insulate Britain’s demands?

Mr Scudder insists Insulate Britain will be “off the roads” if the UK government meets its two demands to help tackle the climate crisis.

The first demand is that ministers must “immediately promise to fully fund and take responsibility for the insulation of all social housing in Britain by 2025”.

The second demand is that the government must promise to produce a “legally-binding national plan” within four months to fund the full insulation retrofit of all homes in Britain by 2030.

Image: Protesters from Insulate Britain block a road outside the Home Office

“If Boris and his cabinet want to come out with a meaningful statement that they’ll address these two demands then we’re off the roads,” Mr Scudder says.

In response to Insulate Britain’s demands, a government spokeswoman told Sky News: “People’s day-to-day lives should not be disrupted, especially on busy motorways where lives are put at risk and resulting traffic delays will only add to vehicle emissions.

“While huge progress is already being made to the energy efficiency of England’s homes – from 9% rated grade C in 2008, to 40% today – we are investing £1.3bn this year alone to go further to support people to install energy efficiency measures.”

Prime Minister Boris Johnson has previously labelled Insulate Britain demonstrators “irresponsible crusties” who are “doing considerable damage to the economy” and are “not” legitimate protesters.

• Who are the Insulate Britain protesters?

Before Thursday’s protest outside parliament, 161 people had been involved in Insulate Britain’s roadblock campaign and there had been more than 800 arrests.

Labour councillor Theresa Norton has also taken part in the road-blocking protests, while one of the protesters who had ink thrown over them was 77-year-old retired hospital doctor Christian Murray-Leslie.

“I really didn’t want to upset people,” she says.

“As a single working mum who worked three jobs, I can just imagine if it had happened to me 10 years ago, I would have been bloody furious.

“I’d like to think I’d have got home and when everything’s calm, I would have thought about it and thought: ‘Why are people sitting in the roads?’, and had a look.”

Mr Scudder says he spent 20 years working in the City – and probably has a “carbon footprint similar to some small countries” – before he became an environmental campaigner.

“I think my family want to shoot me because I’ve kind of dragged them along with me on this,” he tells Sky News.

“I’m not really a bearer of good news because there’s not much good news on this subject, is there?”