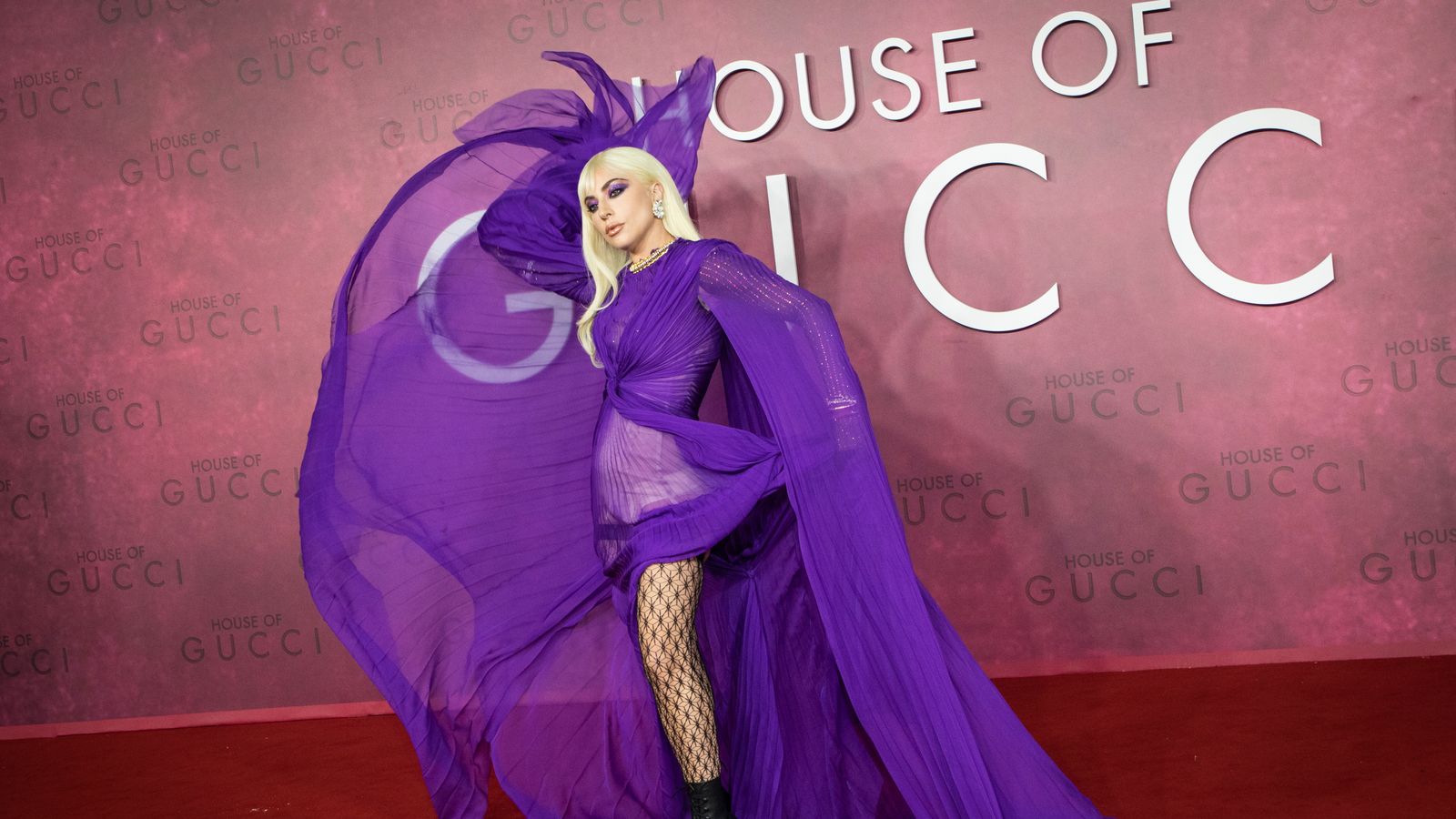 Lady Gaga has told Sky News that her latest film role took a toll on her – but it’s a toll she welcomed.

“That’s part of my artistry, is leaning into the suffering of a character,” she said at the premiere of House of Gucci, which tells the true story of the family behind the fashion house.

And while all families have their differences not many end in murder.

In the film the singer plays Patrizia Reggiani who was convicted in 1998 for hiring someone to kill her former husband Maurizio Gucci.

“To say that it would be easy to play a murderer would be a lie,” Gaga said. “I don’t believe she had the murder gene, but I do believe that she was triggered and pushed so far over the edge that she committed this murder.”

Gaga, who stayed in character for 18 months while making the film, says after inhabiting the character for so long it will take time to extract herself again.

“I would say that in terms of letting the character go, I don’t know that I’d ever let her go,” she explained.

“Today I chose this ring and it looks just like her engagement ring – I feel her inside of me all the time and I think it will take years.

“It took me years to shed Ali from A Star Is Born and I think the same will be true here.”

With this Gucci role only her second lead after that Oscar-nominated performance in A Star Is Born – Gaga is coy about whether she will dominate Hollywood like she has the music industry.

“I don’t know, you have to ask the audience,” she laughed.

The singer leads an all-star cast in the movie which also includes Adam Driver, Salma Hayek and an almost unrecognisable Jared Leto, wearing heavy prosthetics for the role of Paolo Gucci.

As another actor known for staying in character, and who also has a successful music career, Leto said he can see parallels between himself and the Chromatica star.

“I think Lady Gaga and I are both artists, rule breakers in our own ways, and what I love about is her bravery,” he told Sky News.

“She’s absolutely fearless and it was fun to do this with her, I really appreciated the opportunity and the freedom and her commitment.

“I expect a lot out of myself and when other people make great commitment, it’s really an absolute dream.”

The film has been a long time coming for Leto, who’s wanted to work with director Ridley Scott for almost two decades.

“I remember I met Ridley Scott in 2003, and I went up to him at a film festival and basically begged to work with him, and about 18 years later, he said ‘yes’.

“He’s one of my favourites – I mean, Alien, Gladiator, Blade Runner, The Martian – he’s just one of a kind, a real maverick, a real master, and I feel really fortunate to have had the opportunity to work with him.

“Genuinely, I mean it, it touched me and it was a very, very special project for me, it doesn’t happen like this every time, so I feel really fortunate to be here and to be part of the journey.”

Image: Maurizio Gucci was gunned down on the steps outside his office as he arrived at work in March 1995 Pic: AP

For Adam Driver, who plays Maurizio Gucci, the film marks his second time working with Scott – following period drama The Last Duel which came out in cinemas last month.

He says the film-maker brings out a different side of him.

“His process is so opposite to mine in a way – he works fast, likes minimal takes, and sometimes I like to do a lot and overthink it to make it over precious,” Driver told Sky News.

“He’s very much about first impulses and I love it, and he’s the most unpretentious, hilarious person to work with – I love being on set with him.”

The movie sees the twists and turns of his character’s relationship with Gaga’s Reggiani.

Driver says they were both given the time to really dig into the roles.

“We had the luxury of two weeks before we started [filming] of rehearsal.

“Changing the script a lot and really finding the arcs of both characters, and so it was great.

“Ridley sets a tone that is very collaborative so it’s a dream job.”

House of Gucci is out in cinemas in the UK on November 26th.