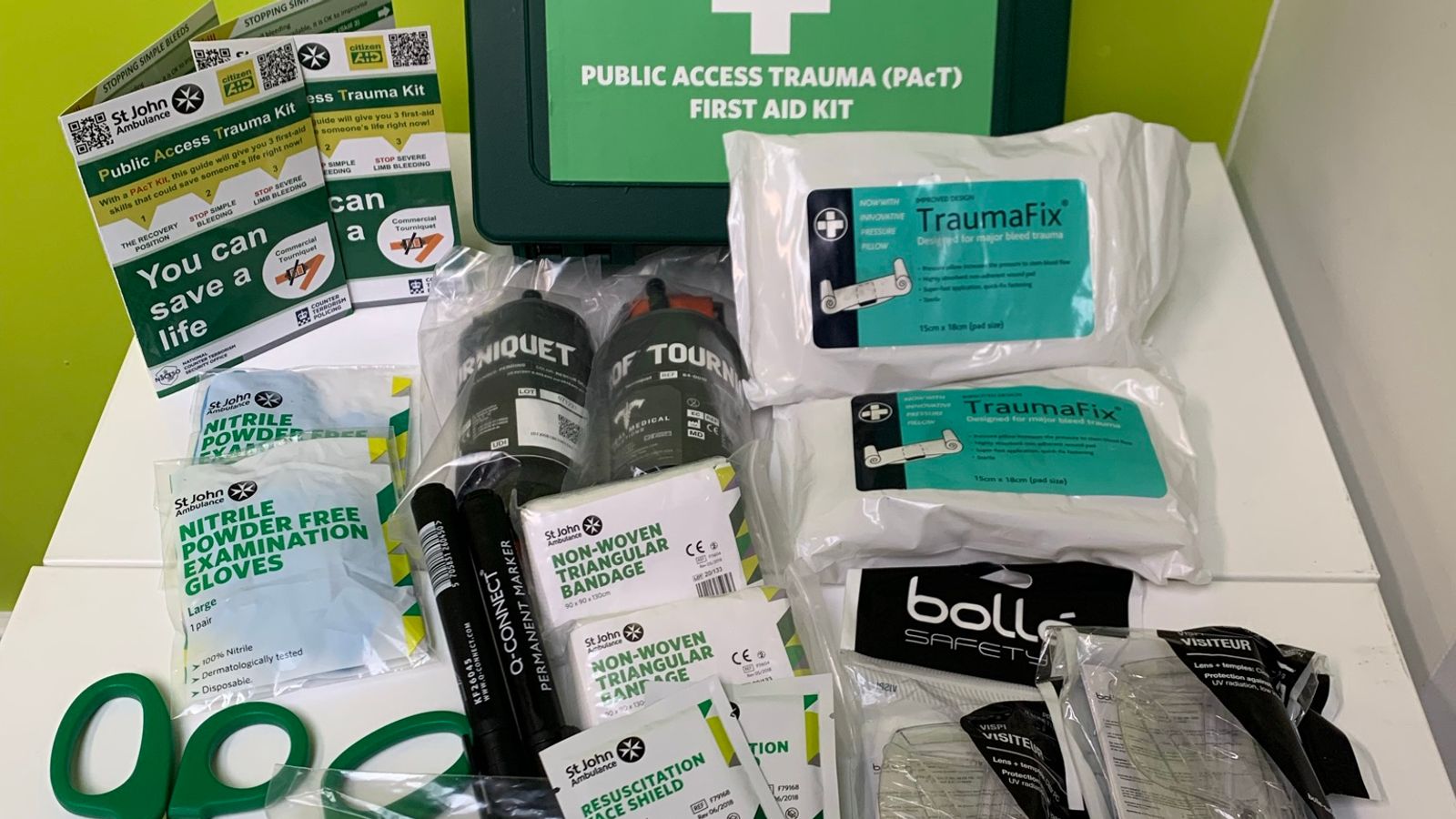 First aid kits containing military-grade dressings and tourniquets should be installed in key locations to save lives following terrorist attacks and stabbings, experts have said.

St John Ambulance, UK counter-terrorism police, and citizenAID – a group set up by civilian and military doctors – are calling for the public access trauma (PAcT) kits to be installed in large and busy venues, including football stadiums and train stations.

The equipment will be available for members of the public to use, regardless of whether or not they are first aid trained, in the event of serious incidents – including terrorist attacks, stabbing, and road traffic collisions.

Image: The equipment will be available for members of the public to use, regardless of if they are trained

Dr Lynn Thomas, St John Ambulance’s medical director, told Sky News these kits are “are all about the immediate life-saving things” somebody can do.

She said: “It shows you how to put someone into the recovery position, how to plug a wound if it’s a stab wound or a shrapnel wound, and then in the horrible incidence of catastrophic haemorrhage on a limb, how you would put a tourniquet on and hopefully save a life.

“We would really hope that helping people to know what to do will make the biggest impact, and it’s really key that these kits can be used by anybody, you don’t have to be first aid trained.”

Each kit will contain enough equipment to treat two people and is being publicised as part of new standards for first aid provision for the seriously injured drawn up by the groups involved.

Nick Aldworth, former UK Counterterrorism National Coordinator, told Sky News: “Although the dynamic of terrorism has been what’s brought us to this position, these kits have far more utility than just the eventuality of terror attacks.

“We still see young people dying on our streets through knife and firearm injuries and quite often these are lives that could be saved with an early intervention.

“The more we do to try to create the environments in which people don’t bleed to death and are able to be saved, the better.”

As well as the terrorist attacks seen in recent years in the UK, concerns over street violence and knife crime have increased.

In some parts of the UK, St John Ambulance is training teenagers from the age of 14 to treat stab wounds.