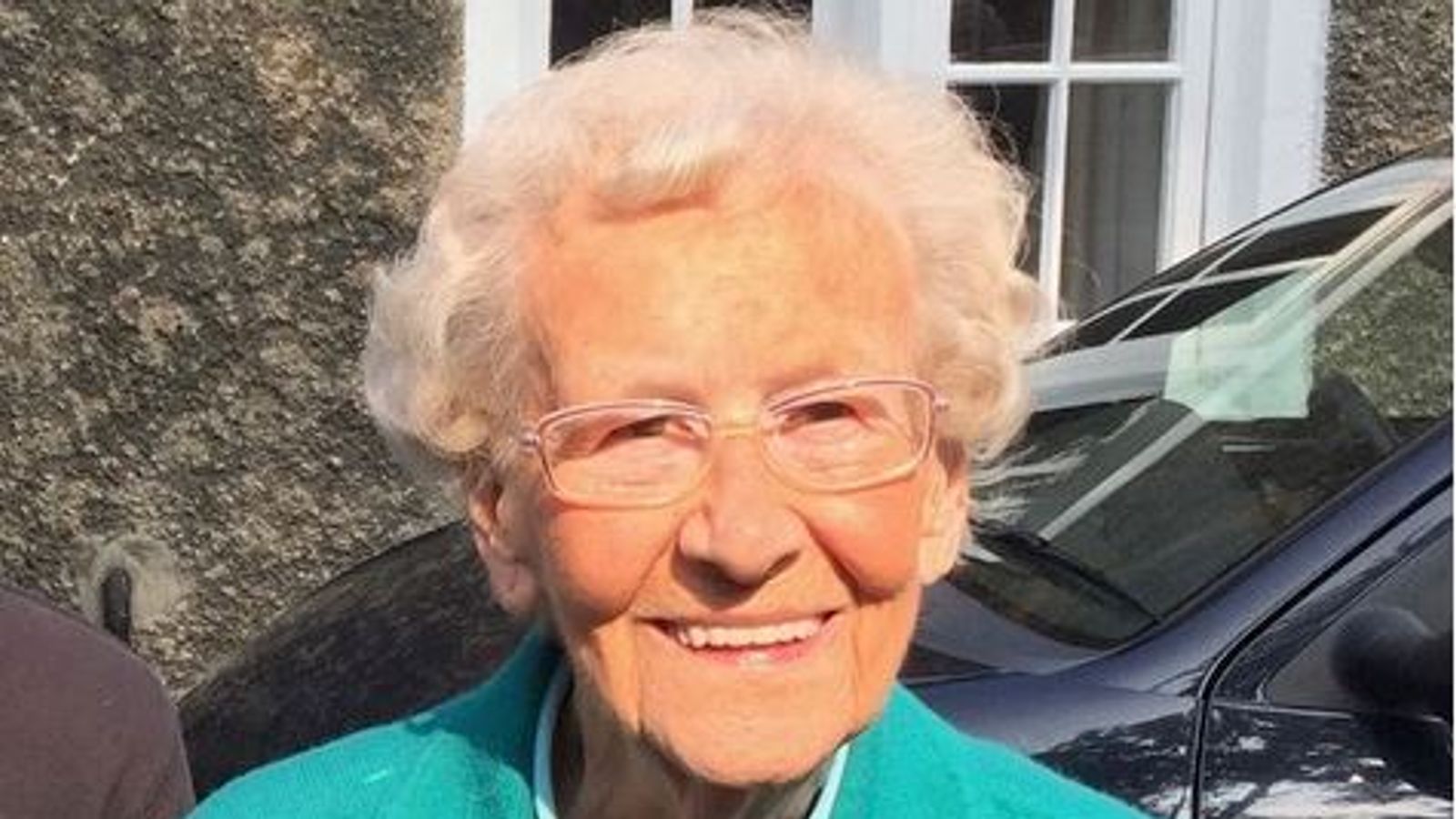 A student has been jailed for life, with a minimum term of 15 years, over the murder of his step-grandmother after admitting to friends he had killed her during a game of “truth or dare”.

Mary Gregory, 94, was discovered under a table in the conservatory of her smoke-logged bungalow in Heysham, Lancashire, in the early hours of 28 May 2018.

Image: Tiernan Darnton deliberately killed his step-grandmother in a housefire

A Lancashire Fire and Rescue service investigation concluded the most probable cause was a dropped cigarette and a coroner reached a verdict of accidental death.

However, police reopened the case a year later after Mrs Gregory’s step-grandson Tiernan Darnton admitted during a counselling session that he had killed her.

The 21-year-old said he had used a lighter to set a curtain on fire.

During the police inquiry it emerged Darnton had made a similar confession several weeks after Mrs Gregory’s death, where he revealed his “darkest secret” during a game of truth or dare with two friends.

“I have a secret I haven’t told anyone,” he told them. “I may have killed someone.”

Sentencing Darnton to life, the judge told him: “Murder had been on your mind for some time.

“On your own evidence, you were fascinated by serial killers and their crimes. You had dark thoughts.”

Mrs Justice Yip said his internet searches before and after the murder “paint a worrying picture”.

Examination of Darnton’s mobile phone and laptop found searches like “I’m a murderer”, “I’m a monster and I’m going to hell”, “I want to cause evil” and “urge to kill again”.

The student, who was 17 at the time of the fire, had also searched for “under 18 murder”.

Mrs Justice Yip told him his opportunity to act on his “darkest thoughts” came when his stepfather away and he deliberately started the fire in one of the bedrooms.

“It is hard to imagine the horror Mrs Gregory must have felt when she realised her house was on fire and was filling with smoke,” she said.

She said Mrs Gregory tried to get out but she had been trapped.

Before the fire, Darnton had placed a table in front of the conservatory doors, unplugged a phone cable and dismantled a smoke alarm in case Mrs Gregory tried to escape.

“The fire service found her near to the conservatory doors, where you had blocked her exit,” Mrs Justice Yip told Darnton.

She said Mrs Gregory’s condition in the last few days of her life “continues to haunt those who loved her”.

“The manner of her death was particularly cruel,” she said.

The court was told that “disturbing material” – including plans to stalk and attack women and a “kill list” containing the names of multiple people – was found in the defendant’s possession, but this had not been presented to the jury during the trial.

During his “truth or dare” confession, Darnton told his friends he started the fire because he did not want Mrs Gregory to suffer from dementia any longer, Preston Crown Court heard.

His friends did not believe him and he persuaded them to keep quiet.

However, he told a counsellor in May 2019 about a friend “who could send me to prison cos of what he knows”.

Darnton added that he had felt “powerful” at an event involving a person who had died – thought to be Mrs Gregory’s funeral – as he “knew what had happened and everyone else in the room didn’t”.

The female counsellor ended the session by saying to him: “I’m not really clear what you’re saying but I think you’re trying to tell me you’ve killed someone”, to which Darnton mouthed “yes”.

A week later he told both the counsellor and his 66-year-old stepfather Chris Gregory that he had started the fire.

The counsellor then told the police.

Evidence shown to the jury also included drawings found at Darnton’s home address, outlining the floor plan of Mrs Gregory’s bungalow. They contained labels including “good hiding place” and “quick exit”, as well as references to needing a “good alibi”.

Darnton, a former student at Kendal College and Lancaster & Morecambe College, had been arrested at his family home in Combermere Road, Heysham, in May 2019.