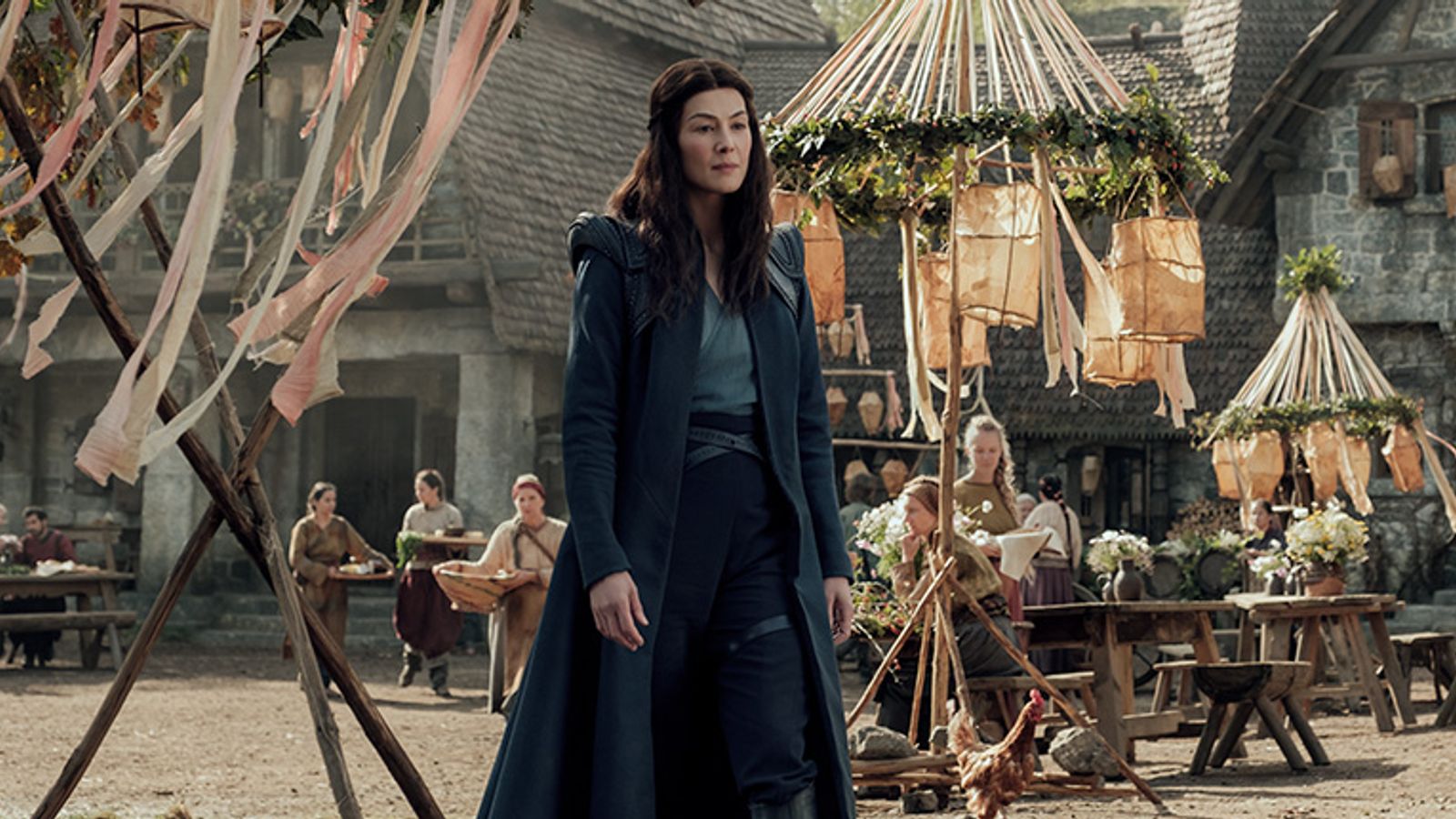 She’s played the manipulative Amy in Gone Girl, has portrayed real people including the war journalist Marie Colvin, and was nominated for a Golden Globe just last year for her performance in black comedy thriller I Care A Lot.

But the new adaptation of The Wheel Of Time sees Rosamund Pike in a fantasy role, leading the cast of a series based on the bestselling novels by Robert Jordan.

She told Sky News’ Backstage podcast it’s nice to be doing something unexpected.

“I do like to surprise people, but I don’t go for the element of surprise at the expense of choices I believe in,” Pike said.

“So it just seemed like this character came into my life for a reason, it sounds a bit sort of like mumbo jumbo, but I’d had a fairly tough ride with some of the big lives that I’ve played in recent years, like Marie Colvin and Marie Curie, and I thought this world that’s striving for balance in Wheel Of Time with this woman, who is kind of connected to the universe in quite a profound way and can channel elements, I thought, ‘this is going to be a role that I grow differently with and acquire some new skills through’.”

With any adaptation comes a weight of expectation from fans – but despite Jordan selling more than 90 million copies of the Wheel Of Time books, Pike isn’t just unphased by that expectation – she thrives off it.

“And I think there’s a risk involved because obviously you know that you won’t please everybody, and I think that little bit of danger of the fact that you could so easily fail, I think that also appeals to me.”

Pike’s co-star Daniel Henney admits he did wonder how fans would react to the cast.

“In the beginning, there was some trepidation because of how many books have been sold and how beloved they are,” he told Backstage.

“But I was pleasantly surprised once we started and once we got to know The Wheel Of Time fans and the fan base, and how lovely they are, and how supportive they’ve been.

“I think that we’re just so lucky because it feels like they’re just an extension of us, a team, and they’ve been more of a support system than anything, which is not what I sort of anticipated in the beginning when you sign on to something that’s so beloved and there’s a lot of pressure, but it’s turned out to be a real asset for us, to be honest.”

Pike and Henney’s characters are extremely close – but the relationship is purely platonic.

The actress said that meant developing “a kind-of shorthand” between the pair to show how well they know one another.

“So things like that, which is perhaps not immediately obvious, but often we are back-to-back, but we’re completely aware of one another in space and anticipating the other person’s move.

“It’s a lovely thing Robert Jordan wrote in the development of this bond, it’s a really cool thing to play with, and one I think the audiences will really, really enjoy.”

Henney said it meant straying from the norm when it came to filming certain scenes, saying: “I remember the stunt guys when they choreographed the sequences initially, they’d done a great job, but there were some moments where they included moments for me to look directly at her and to sort of make those moments stand out.

“And I said, I didn’t want that, I wanted it to be much more sort of on an unspoken level, that we don’t have to look at each other, we could feel each other.”

Pike’s character can use magic, harnessing light in order to cast spells, and she told Sky News she drew from the practices of Tai Chi and Qigong in order to make the performance feel authentic.

“I want to feel that when she’s pulling these threads, there’s something that she’s actually getting hold of… And I wanted to just avoid at all costs something that doesn’t feel connected, the kind of relying totally on visual effects to make me look cool,” Pike said.

“I just thought ‘I’ve got to believe because surely the most interesting part of this character is the cost to her of channelling – what is the physical toll of these massive elemental forces coming through your body?’ That’s what’s surely interesting about the one power.

“Robert Jordan stresses that if you’re not trained in it, it’s so intoxicating to use it that you draw more and more until finally, it burns you through and through, like an incredibly strong narcotic.”

The Wheel Of Time is out on Amazon Prime Video – hear our review in the latest episode of Backstage – the film and TV podcast from Sky News.