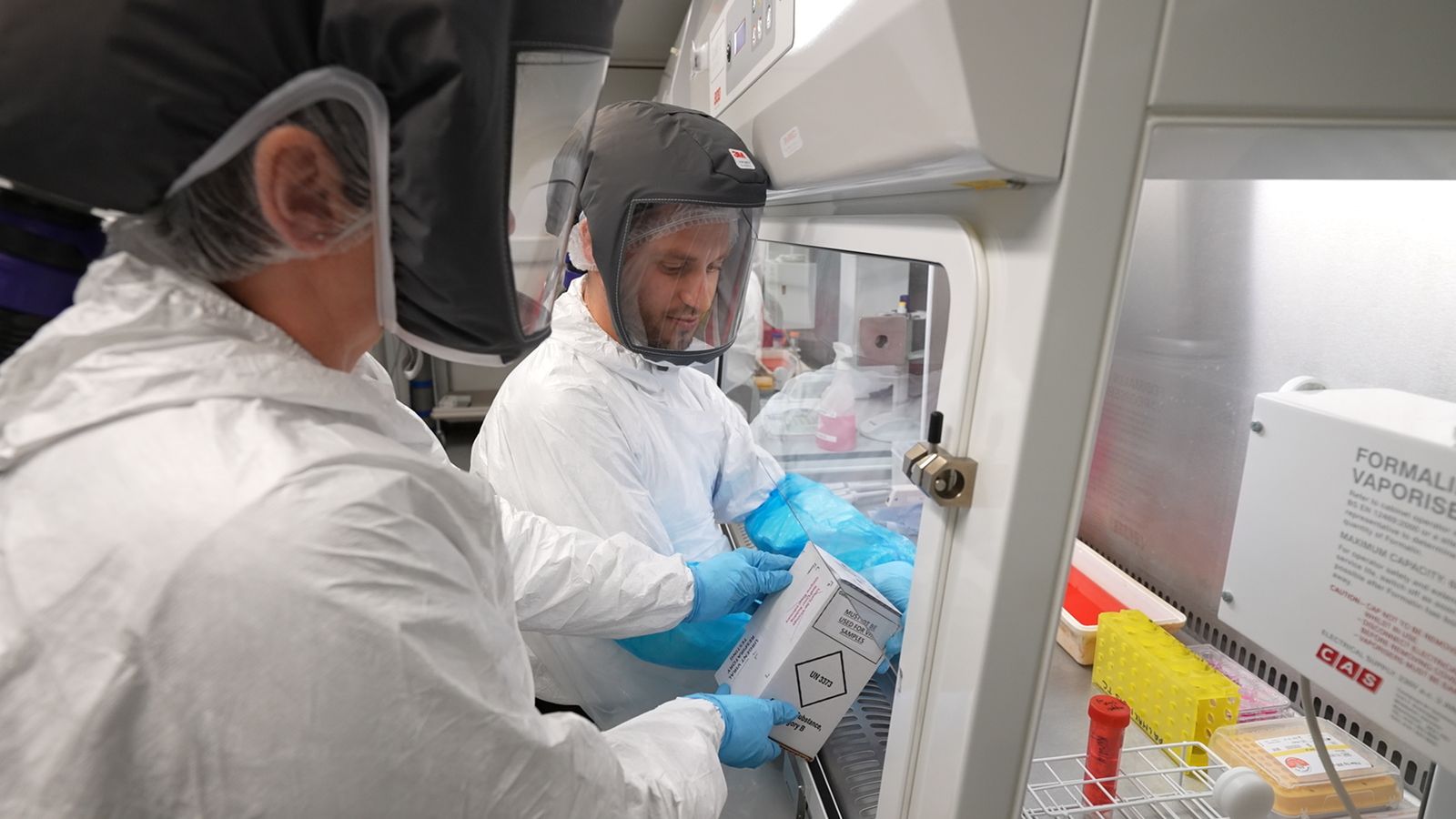 About the size of a pack of biscuits and made of cardboard, the box looks innocent enough. That is, if it wasn’t for the biohazard warnings all over it.

Inside it is a screw-top plastic tub, within which is a sheet of bubble wrap, swaddling a plastic tube containing a few drops of pink liquid. In that is floating what researchers here hope is their first living sample of the Omicron variant.

But we’re not able to see all that yet, because before the box can be opened it has to be taken inside the high-level containment lab.

Image: Before the box can be opened it has to be taken inside the high-level containment lab

This one, at the MRC Centre for Virus Research at the University of Glasgow, is among only a few in the UK licensed to handle pathogens as potentially troublesome as new SARS-CoV-2 variants.

To get in means dressing in disposable overalls, not one pair of gloves and overshoes but two, and a special hood with its own air supply. All this PPE is as much about keeping the virus sample from being contaminated, as it is about keeping me and the scientists safe.

Because although a sample of a new variant of COVID is potentially dangerous, it’s also very precious.

While cases of the Omicron variant clock-up in England, by the time a case is confirmed, the virus is usually dead. The liquid that a standard PCR swab is dipped into doesn’t just isolate the virus’ genetic material, it also kills the bug to keep lab workers safe.

But in this lab, they need live virus. They need to see the Omicron variant in action to answer the urgent questions the world has: Can it evade our vaccine antibodies?

Is it more infectious than the Delta strain? Is the disease it causes more severe, or milder than what we’re already dealing with?

Image: About the size of a packet of biscuits, this cardboard box looks innocent enough Image: Visitors are not allowed in the lab while the live virus is being handled

So this sample has been specially collected by scientists at Public Health Scotland from a person with a suspected Omicron infection.

Subsequent sequencing in the lab will confirm the exact strain of the virus – but the researchers here say they’re more than 90% certain this sample will give them the research material they need.

In recent days, other labs in the UK have also obtained similar samples. But this is the first to be isolated in Scotland and the first we’ve been able to see.

Image: The MRC Centre for Virus Research, at the University of Glasgow, is among only a few in the UK licensed to handle pathogens like this

We watch as the sample is unboxed under a special cabinet that draws air away from the researcher handling the sample and channels it into a filtration system.

The next step is to take the virus and use it to infect lab-grown human cells. These cells will then be used to “grow” the virus until sufficient stocks of it are available for the range of experiments they need to do.

We’re not allowed to film this. Although the risk of a spill or contamination is minute, visitors aren’t allowed in the lab when the live virus is being handled.

Image: Although the new variant of COVID is potentially dangerous, it is also very precious

But we do see cells under the microscope infected with previous strains of SARS-CoV2. Compared to healthy ones some have burst open, others have merged into great masses resembling one giant cell into which all their contents has pooled.

How quickly Omicron infects and destroys cells in the lab can be a crude indicator of how quickly it can invade a real person. But the more urgent experiment is to establish whether antibodies from people who have been vaccinated, or even boosted, will bind to the variant.

This will give us an early hint as to whether or not Omicron is going to cause us a real problem.

Image: By the time an Omicron case is confirmed, the virus is usually dead

But the scientists tell me this work will take time. Several days to culture the virus. A few weeks to get results on antibodies.

That timeline means it’s likely we’ll get the first hints as to the variant’s severity from outbreaks like the one developing in South Africa, while the lab scientists work out the details. But if it comes to designing new vaccines or drugs, and let’s hope it doesn’t, those details are important.