Olivia Colman: Landscapers star on the bizarre real-life murderers behind her new drama 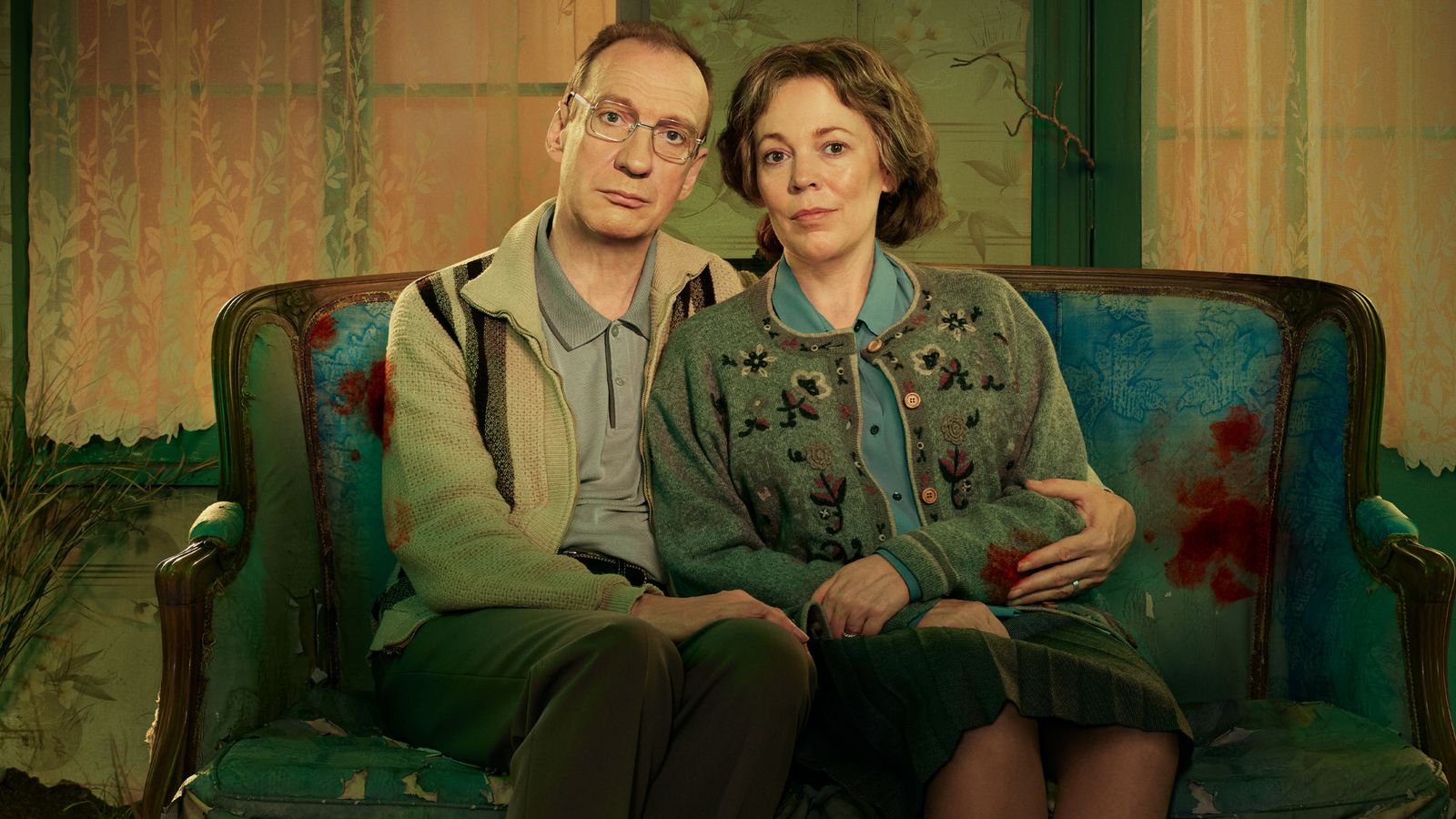 In 2013, the bodies of a man and a woman were discovered buried in the garden of a house on the outskirts of Mansfield in Nottinghamshire.

The remains turned out to be those of Patricia Wycherley, 63, and her 85-year-old husband William, whose neighbours thought had packed up and left to go travelling 15 years earlier.

In fact, they had been shot and killed by their daughter and son-in-law Susan and Christopher Edwards, their deaths covered up for years in a stranger-than-fiction story that is now being dramatised in new four-part Sky Original limited series Landscapers, starring Oscar-winner Olivia Colman and David Thewlis.

Image: Colman plays Susan Edwards, who is currently in prison for the murders of her parents. Pic: Stefania Rosini/ Sky UK/ HBO/ Sister

Because while the Edwards stole almost £300,000 as they kept up the pretence that all was well, they did not use the money to fund a lavish lifestyle – but rather a fantasy world.

Colman tells Sky News that during her preparation for Landscapers, which is written by her husband Ed Sinclair, she began to feel some sympathy for the couple.

“I felt sympathetic towards them early on because of what Ed had been finding out,” she says. “He spoke to her solicitor who said she was a very shy, gentle, well-read, [a] nice woman. And you go, ‘okay, well that’s not what everyone has told us?!'”

When the case went to court in 2014, in a bizarre twist it emerged the couple had spent the vast majority of the money they stole on Hollywood memorabilia.

In Landscapers, unlike most typical TV crime dramas, the show sees Susan’s delusional obsessions brought to life as her imagined fantasies are acted out on screen.

“We find out, through the programme, she faced abuse at the hands of her father as a little girl, and I think it’s her escapism to sort of imagine men [can be] heroic and that she finally meets her knight in shining armour,” Colman says.

Thewlis, known to many for his roles in I’m Thinking Of Ending Things, Fargo and the Harry Potter films, plays Colman’s on-screen husband.

“I read the script and thought it was just perfect, the best thing I’ve read for many, many years,” he tells Sky News.

“I was amazed when I googled the real story to find out how much of it is completely true and actually the truth bits are the most bizarre bits.”

Arguably one of the weirdest facts presented is how Susan had convinced her husband that French actor Gerard Depardieu was his pen pal.

“If it had been a sh*t script I would have been really nervous,” Colman jokes, about working on her husband’s show. “I might have said I’m not available, I’m picking the bobbles off my tights or something, but I was really excited when I first read it. It’s just the originality in it and the inventiveness.”

Before the interview, Colman and Thewlis had just found out that Christopher Edwards has seen the show’s trailer in prison.

“I’m kind of a little unnerved by that,” Thewlis says. “One does sometimes forget they’re real people.”

“He said the hair was very good!” Colman chips in.

“It must be very strange,” Thewlis muses. “You know, Susan’s fantasy was the movies and here she is represented in a TV series, she’s on the big screen. That’s a sort of strange twist, isn’t it? What will she fantasise about now?”

Landscapers premieres on Sky Atlantic and NOW on Tuesday 7 December

Sir Antony Sher: Prince Charles and Dame Judi Dench among those paying tribute to ‘giant of the stage’