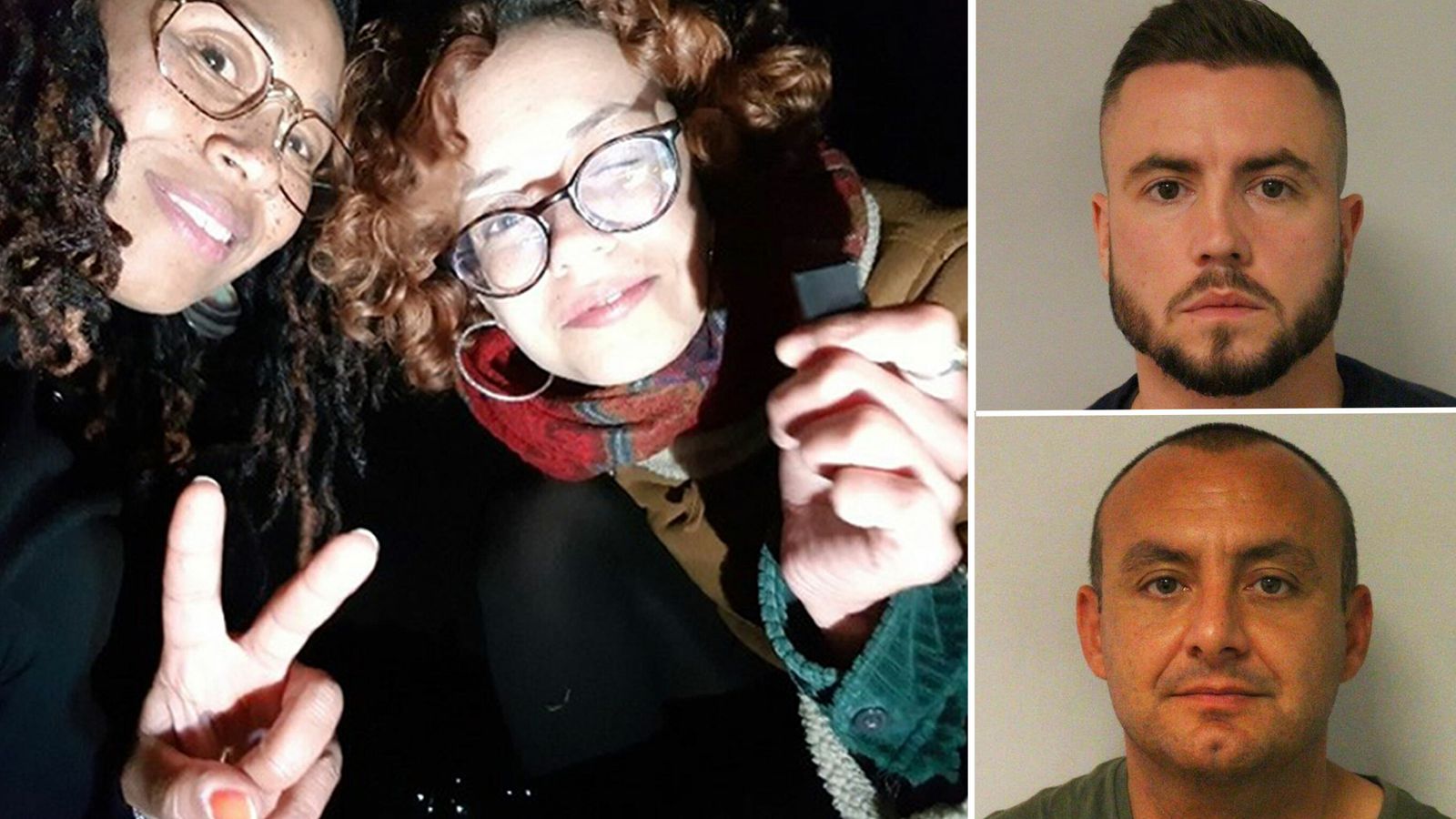 The mother of two sisters murdered in Wembley has said the officers who took photos of their bodies are “more sorry they got caught” after they were jailed for two years and nine months.

PC Deniz Jaffer and PC Jamie Lewis had previously admitted sharing images of the bodies of Bibaa Henry, 46, and Nicole Smallman, 27, and were found guilty of gross misconduct at a tribunal last month.

Image: Jamie Lewis and Deniz Jaffer were both jailed at the Old Bailey. Pic: Met Police

Judge Mark Lucraft sentenced the pair on Monday to two years and nine months each at the Old Bailey for misconduct in a public office. They must serve half their sentences.

After the sentencing, the victims’ mother Mina Smallman told reporters that she was “pleased” by the sentence but added: “It is not a day for celebration.”

Image: Mina Smallman said she hoped the sentencing would ‘send a signal to the Met’

Ms Smallman said: “They are more sorry that they got caught than they are about what they did. They’ve got caught with their hands in the cookie jar and now they’re sorry.

“I feel sorry for their family. I know it’s not going to be easy for them but it hasn’t been easy for us. This additional pain and suffering we’ve gone through could have been avoided.”

About the sentencing, she said: “It is heinous and I’m really pleased.

“I’m hoping this sends a signal to the Met and all other police forces and gives strength to those who are being abused and hearing language that they detest but are afraid to speak up, that now is the time. Speak up, people will listen.”

The officers had been assigned to guard the crime scene overnight after the two sisters were found dead in bushes in Fryent Country Park, Wembley, northwest London, in June last year.

Instead, they breached the cordon to take “inappropriate” and “unauthorised” photographs of the bodies, which were then shared on WhatsApp.

Lewis even superimposed his face on to a picture with the bodies in the background, the misconduct hearing heard.

He sent the doctored image to Jaffer, who forwarded it to a female police officer at the scene.

Jaffer then showed one of the images to a male officer as they left the park and sent others to three friends on WhatsApp.

Lewis, who used “degrading and sexist” language in messages about the victims, also shared crime scene pictures with a WhatsApp group of more than 40 officers called the “A Team”.

More detail on the language the two officers used in their messages was also revealed during the hearing, with both referring to the women as “dead birds”.

The pair, who were attached to the Metropolitan’s North East command unit, were suspended from duty following their arrests on 22 June last year.

Image: Danyal Hussein, 19, was found guilty of murdering the sisters

Jaffer, 47, of Hornchurch, east London, and Lewis, 33, from Colchester, Essex, previously pleaded guilty to misconduct in a public office.

Lewis was dismissed from the Metropolitan Police at last month’s tribunal hearing, while Jaffer was told he would have been dismissed if he was still serving.

Assistant Metropolitan Police commissioner Helen Ball said: “Our thoughts are once more with the family and friends of Bibaa Henry and Nicole Smallman. I am so sorry that during the most difficult time in their lives the actions of these two officers caused them so much additional pain and distress.

“Today former PCs Jaffer and Lewis have been punished for their actions which were utterly unprofessional, disrespectful and deeply insensitive.

“All of us in the Met and wider policing are horrified by their shameful behaviour.”