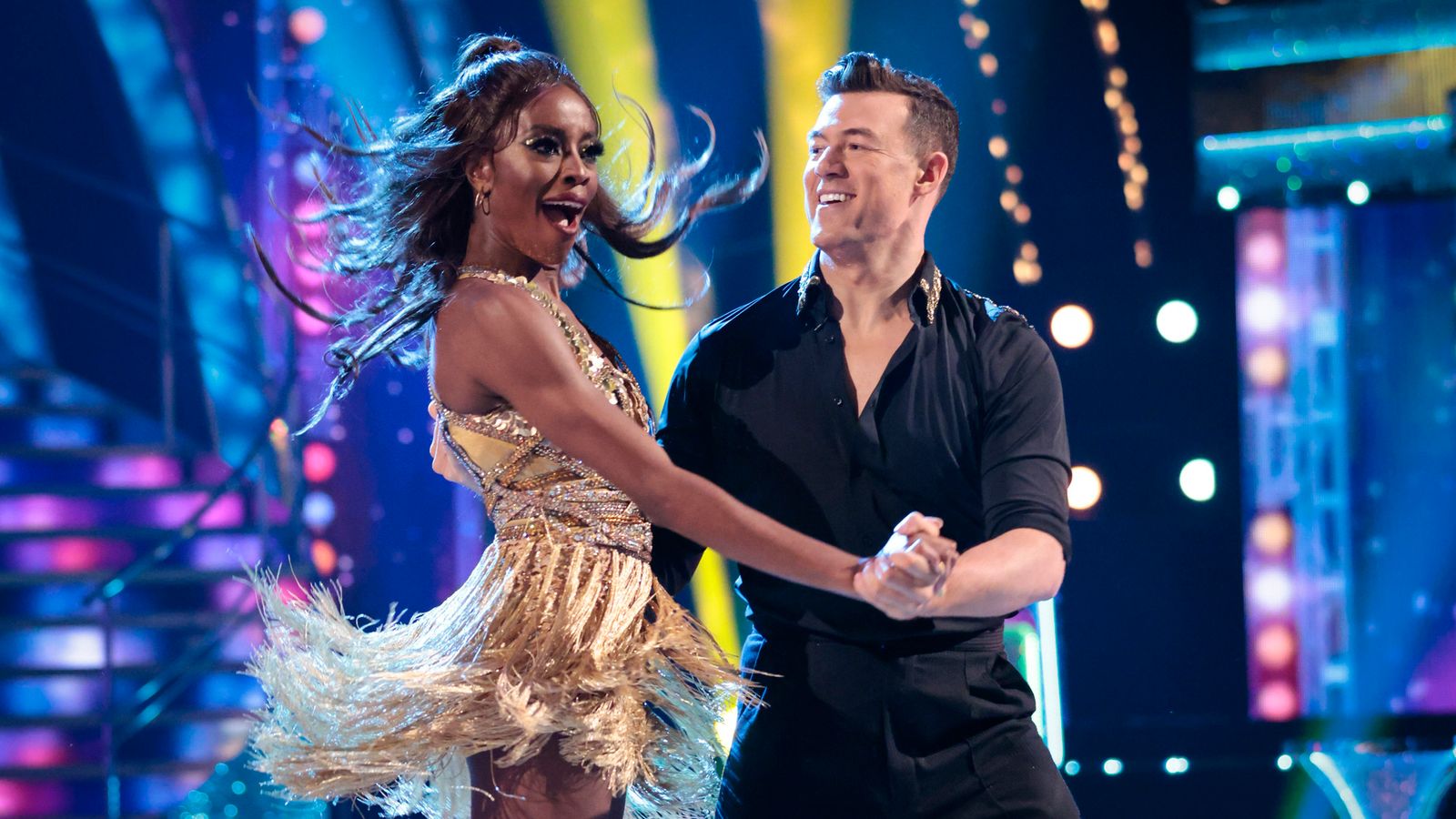 AJ Odudu has pulled out of this weekend’s Strictly Come Dancing final after sustaining an injury to her ankle.

Odudu, who had been one of the early favourites to win the show, said in a statement: “I’m deeply upset that I am unable to perform in the final due to a torn ligament in my right ankle.

“Learning to dance over the last 13 weeks has been an incredible honour and to do it alongside someone as special, patient and devoted as Kai is something I’ll treasure forever.

Image: AJ Odudu has pulled out of the Strictly final. Pic: BBC

“Thank you to the Strictly family for the experience, the medical team for trying to get me back on my feet and mostly, to everyone at home for watching and supporting.

“You’ve made this experience one to remember. Strictly Come Dancing has been a lifelong dream and I’m glad it came true.

“Good luck to my partners in dance, John & Johannes and Rose & Giovanni. I will be cheering you on (on one leg!).”

Odudu’s professional partner Kai Widdrington added: “I’ve been absolutely honoured to get to dance with the incredible AJ Odudu for the last few months and although neither of us wanted our journey to end this way, AJ’s health and safety are by far the most important things.

“I want to thank AJ for being the absolute best partner I could ever have asked for in my first year on the show and I will always treasure the memories of dancing in the Strictly ballroom with her.

“I know we will be friends for life and I will be there for her through her recovery in whatever way I can.

“I want to wish good luck to John & Johannes and Rose & Giovanni for the final.

“And finally the biggest thank you to everyone who voted for us throughout the series, your support has been unforgettable.”

During a break in rehearsals a few weeks ago, Odudu told Sky News that being in the final group of performers was a “dream come true”.

She added: “I’ve really pushed myself mentally and physically, and it’s been a real emotional rollercoaster.”

That leaves EastEnders star Rose Ayling-Ellis, the show’s first deaf contestant and former Bake Off winner John Whaite, part of Strictly’s first all-male pairing, to battle it out for the Glitterball Trophy on Saturday night.

Odudu is not the first contestant to have to pull out of the show this year – England rugby star Ugo Monye sustained a back injury, forcing him out the competition for a week, while Peep Show actor Robert Webb withdrew altogether on the advice of doctors.

Strictly Come Dancing airs on BBC One on Saturday night at 7pm.