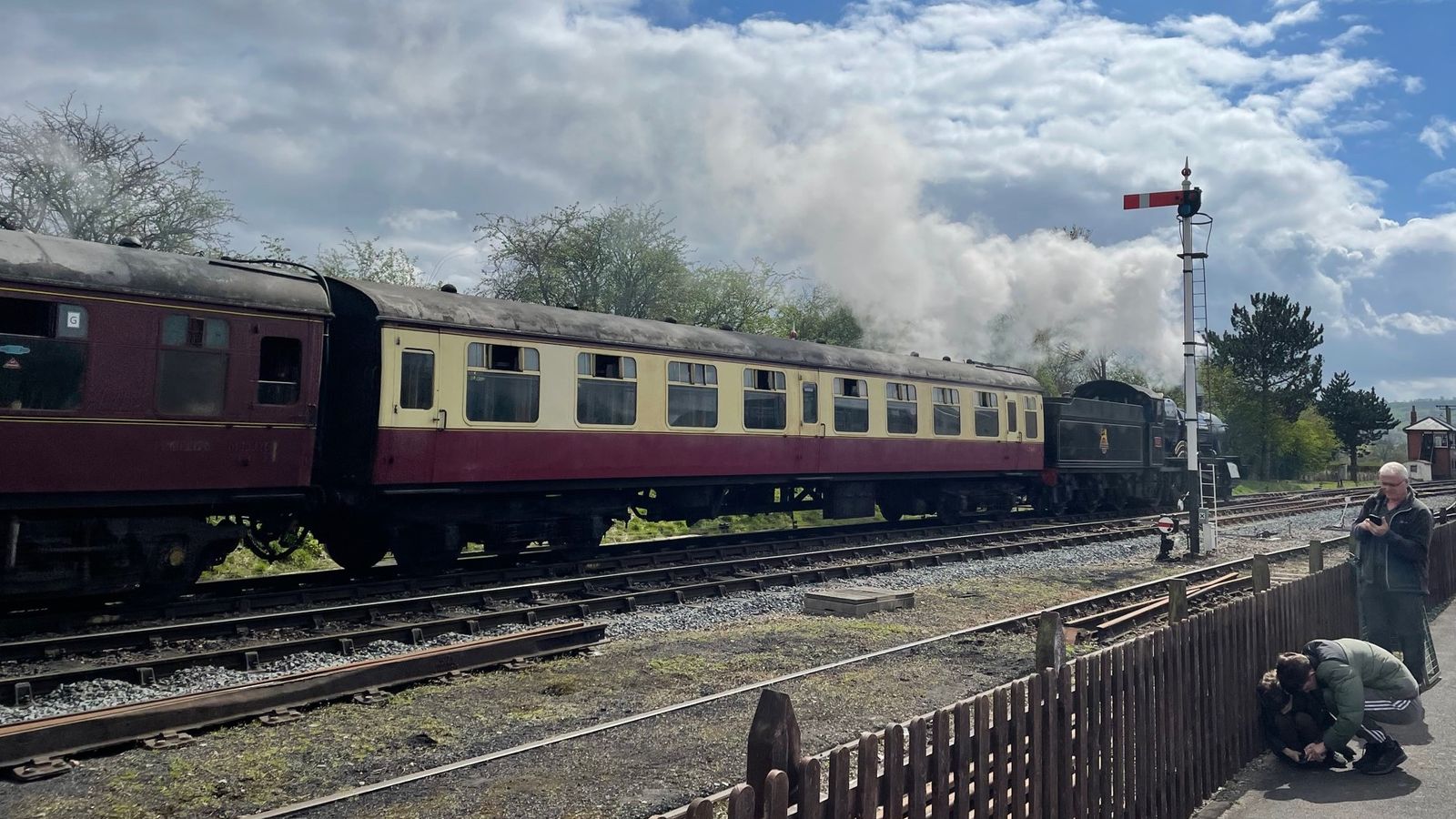 More than 150 heritage steam railways in the UK are facing a potential “critical” shortage of coal, prompting some services to be cancelled or postponed as supplies dwindle.

The issue has arisen after the Ffos-y-Fran coal mine in South Wales ceased production in January, earlier than expected. It was the last of the UK mines which supplied coal suitable for steam trains.

The conflict in Ukraine has also meant that supplies of Russian coal have stopped, meaning some railways have only one month’s supply left.

Chief executive of the Heritage Railway Association, Steve Oates, said: “Right now – as I talk to you – we’re not sure where the next supply of coal is going to come from. 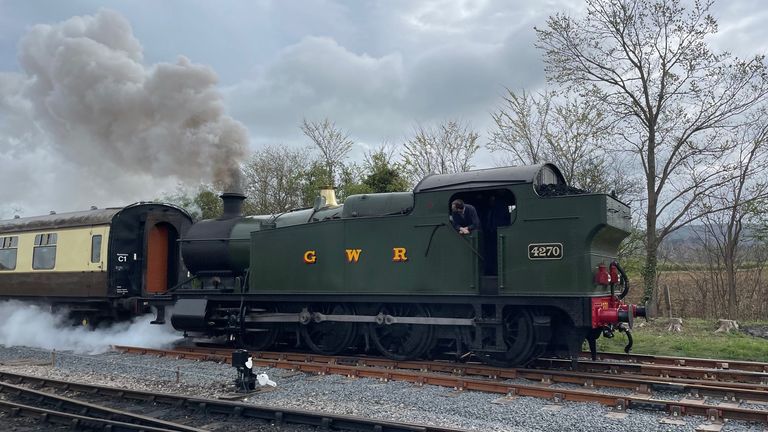 “So from that perspective, it is critical. There are a few railways that only have stocks to the end of May.”

He added: “The issue is a challenge to our supply of lump coal. One is the end of mining the UK and the other is the horrendous conflict in Ukraine.”

The association says it is in talks with the UK and Welsh governments about extending the life of some coal mines to maintain a domestic supply.

But the immediate solution involves shipping in thousands of tonnes of coal from abroad.

Across the UK there are more than 150 heritage railways, estimated to be worth around half a billion pounds to the UK economy.

At the Gloucestershire Warwickshire Steam Railway (GWSR), around 50 tonnes of Welsh coal is piled in the yard beside the track in Toddington.

It is the very last delivery from Wales they’ll receive. 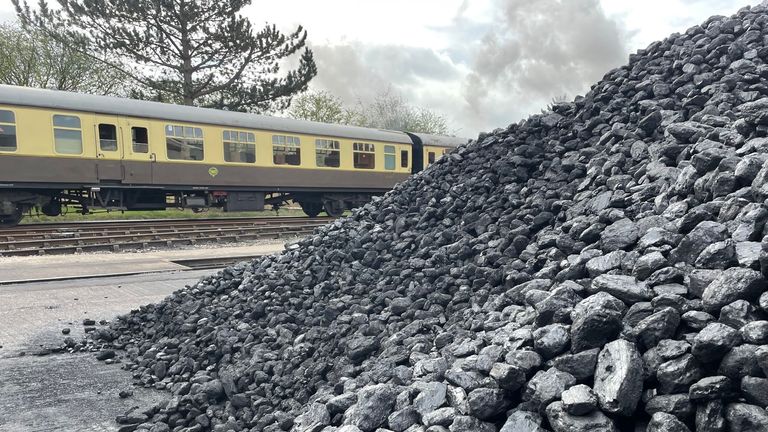 Image: Around 50 tonnes of Welsh coal is piled in the yard beside the track in Toddington

To make it last, services are currently running on coal brought in from Colombia.

Chairman of GWSR, Richard Johnson, admitted it isn’t an ideal situation both economically and environmentally.

“It’s a variable quality and we’ve got no control over the price. Our coal bill has already increased by around £45,000 this year, even if the price stays as it is now.”

He added: “Our locos were built to run on Welsh steam coal and, with it no longer available, we’ve got to look for alternative sources.

“If we get to a stage where the cost of coal means we’re not running profitably, no heritage railway is going to be able to operate.” 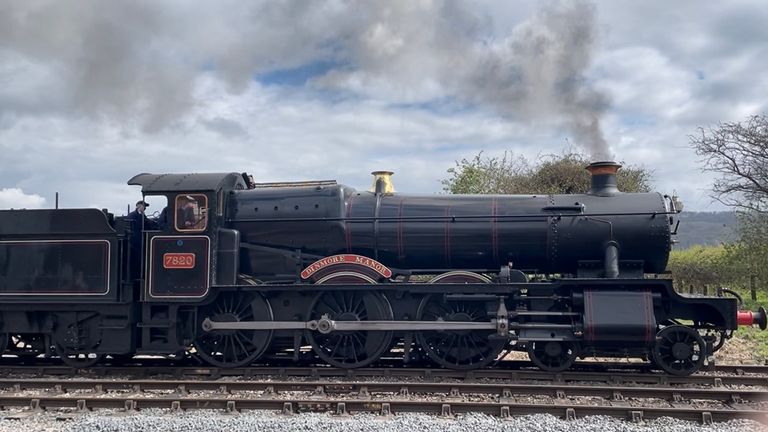 Image: The conflict in Ukraine has also meant that supplies of Russian coal have stopped, meaning some railways have only one month’s supply left

What is the long term solution and how long could it take?

While shipping in foreign coal may provide a temporary solution, long term alternative man-made coals are being developed.

GWSR is one of a number of heritage railways trialling such fuels, but there are concerns about the efficiency and cost compared to natural lump coal.

Mr Oates said it could be up to four years before tests are completed.

“We’re a very responsible industry, a responsible sector. We first started work on alternative fuels three years ago – thinking we’d have plenty of time,” he added.

24:22 How countries plan to phase out coal power

“It’s not as simple as saying ‘here’s an alternative’, there’s a lot of chemical analysis that has to be done.”

Millions of tourists take trips on steam railways in the UK every year, and the shortage of coal comes ahead of the busy Easter and summer seasons.

Mr Johnson said that while he hopes services won’t be disrupted, it will depend on the cost and availability of future coal deliveries.

“At the end of the day – we’re a visitor attraction, but we’re a business, we’ve got to run this as a business, we have to make a profit to reinvest in the business,” he added.