Dog attack: Mother’s warning to parents after ‘all of toddler son’s nose ripped’ from single bite 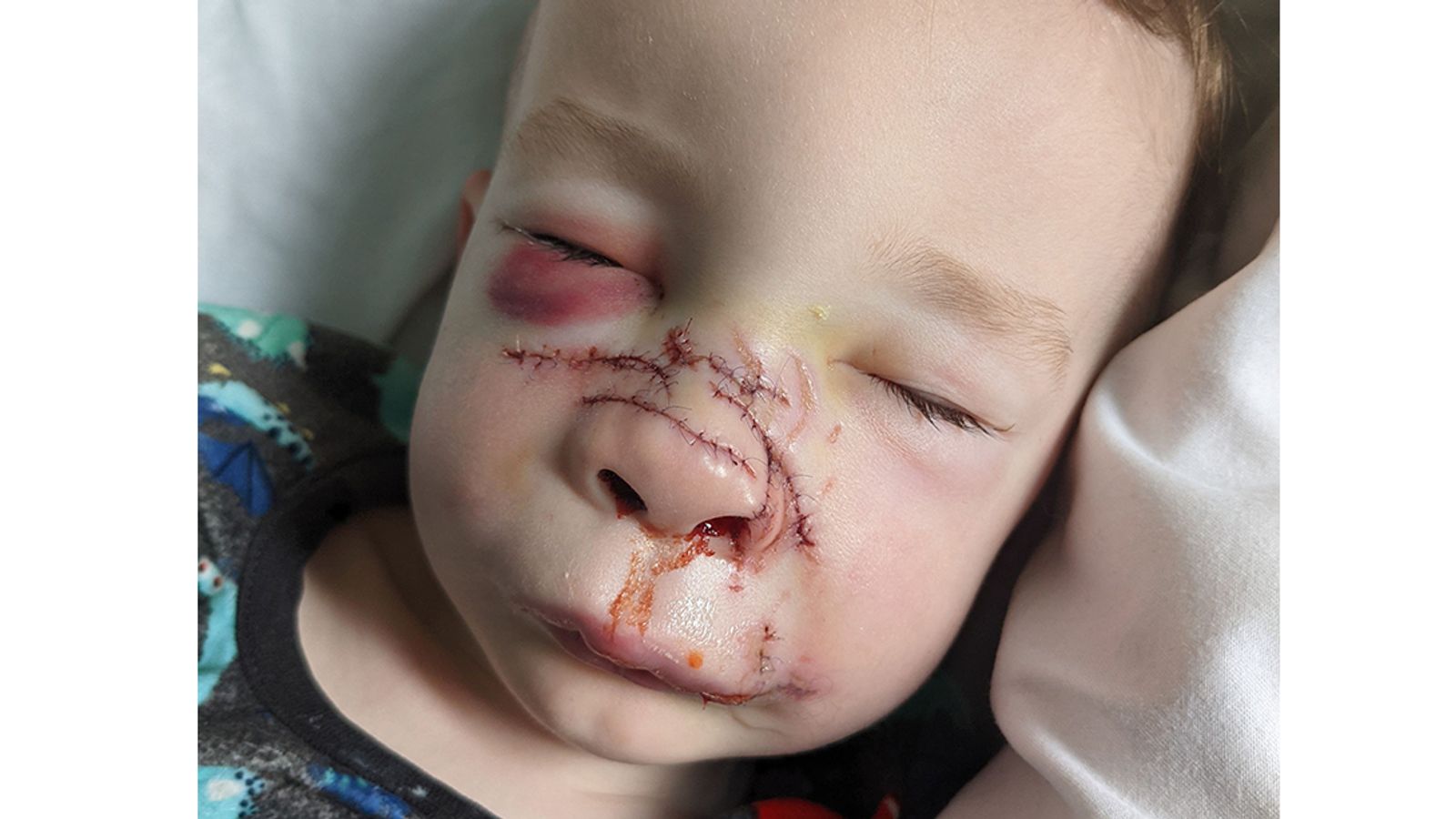 A mother has shared distressing photos of how the family dog bit her toddler son’s face, “ripping all of his nose”, even though he was the boy’s “best friend”.

Jodie Griffiths says the images of two-year-old Romy following the attack by Blizzard are a warning that even trusted pets can maim children and she does not trust any dog now.

Romy and his siblings had been playing in the living room with their new flying helicopter toys as the eight-year-old Staffordshire Bull Terrier Cross slept on the sofa nearby.

Romy’s father, Daniel Griffiths, 32, had only looked away for a second before the child screamed out in agony and he turned back to find him covered in blood after a single bite tore through his nose.

Mother-of-eight Ms Griffiths, who was at work when the attack happened on 27 December, said: “It fractured his jaw, ripped all of his nose, ripped out three teeth from the root – he had to have hundreds and hundreds of stitches, they lost count of how many. Image: Romy and Blizzard before the attack

“The damage was really bad on the inside of his nose and they said if the dog had bit down a little bit more his whole nose would have been bitten off.”

Photos show how Romy was left with deep lacerations across his nose and face, a fractured jaw and missing teeth from the attack.

The parents say the dog, who was their son’s “best friend”, had never been aggressive before, leaving them convinced he had been startled awake by the flying toy and lunged at the tot’s face in shock.

Ultrasound assistant Ms Griffiths, from Walsall, in the West Midlands, said: “I was at work and got a call from my partner saying the dog had bit the baby – I was very panicked and couldn’t believe it. I still find it hard to get my head round it now.

The parents took Romy to New Croft Hospital in Wolverhampton, and from there, he was transferred to Birmingham Children’s Hospital where he underwent surgery the following day to stitch his nose back together.

What was meant to be a two-hour operation ended up taking five hours due to the extensive damage to the little boy’s face, followed by two nights in hospital recovering.

‘He wouldn’t let anyone look at his face’

She said: “We didn’t quite realise how bad it was until after his surgery because he wouldn’t let anyone look at his face.”

Blizzard had been part of the family for most of his eight years since being a puppy and had never shown any signs of aggression before, said the couple.

Romy, who has been left with scarring on his face, has to have check-ups at the hospital as he grows due to concerns that the amount of stitching done to his nose will prevent it from growing with him.

Doctors have warned that he may need another operation by the time he is four and further surgery when he is a teenager to reshape his nose and nostrils to his growing face.

Warning to other parents

Ms Griffiths hopes to warn other parents about the risks of having a dog around children.

She said of Romy: “Even looking at him now I can’t believe he’s got to live with this scar but he is healing beautifully.

“I want to raise awareness and I wouldn’t advise anyone with kids having a dog because even if it’s an accident it can still happen.

“People love their dogs and say ‘my dog would never do that’ but we used to say the same.”

She also said that police agreed that what happened was an accident, meaning Blizzard could stay with the family if they wished.

But the mother admits she would never be able to trust the canine around her children again and so they decided to surrender him to the police to be rehomed.

‘He was Romy’s best friend’

She said: “Blizzard has always been a family dog who loved to play, loved a fuss and wanted to get involved with everything.

“He was a soft dog and the kids loved him to death. He was Romy’s best friend.

“I don’t think it was a planned attack. He’s not continued the attack or ragged him about or anything, all that damage was just from one bite.

“I would never have trusted him around my kids again, I don’t trust any dog anymore.”

After surrendering Blizzard to the police to be rehomed, the dog was given a “thorough assessment” and it was determined he could not be rehomed due to the nature of the incident, and was humanely destroyed.

A West Midlands Police spokesperson said: “We were called to [an address] in Wolverhampton on 27 December 2021 to reports a child had been bitten by a dog.

“The two-year-old was taken to hospital and treated for serious injuries to his face. The dog, a Staffordshire Bull Terrier Cross, was seized under Section 3 of the Dangerous Dog Act.

“The ownership of the dog was transferred to police. Following a thorough assessment it was established the dog could never be rehomed due to the violent act and they were humanely destroyed.”