Amir Khan: Ex-boxing champion has £70,000 watch stolen after he and wife Faryal robbed at gunpoint in Leyton Police have released an image of a £70,000 watch stolen from former boxing world champion Amir Khan, as they urged witnesses to come forward.

The 25-year-old said he and his wife Faryal were robbed at gunpoint by two men in Leyton, east London, earlier this week.

The Metropolitan Police added officers were called just after 9pm on Monday to High Road, but said no shots were fired and nobody was injured in the attack.

The police have now asked the public for any information about Mr Khan’s “easily” recognisable custom-made Franck Muller timepiece.

Detective Constable Ben Grix, of the Met’s North East Command burglary and robbery team, said: “I am today releasing an image of the stolen watch which is a high-value Franck Muller timepiece valued at around £70,000.

“It is a one-off custom made design and will be easily recognised by anyone it is offered to for sale.

“If you, or anyone you know is offered the watch at a discounted price please contact us immediately.”

There have been no arrests as of this afternoon.

DC Grix added: “We are still keen to hear from anyone who witnessed the robbery, has information, or has footage of the incident.

“The effects of being a victim of an armed offence go far beyond a loss of property. If you have information please do the right thing and get in touch.” 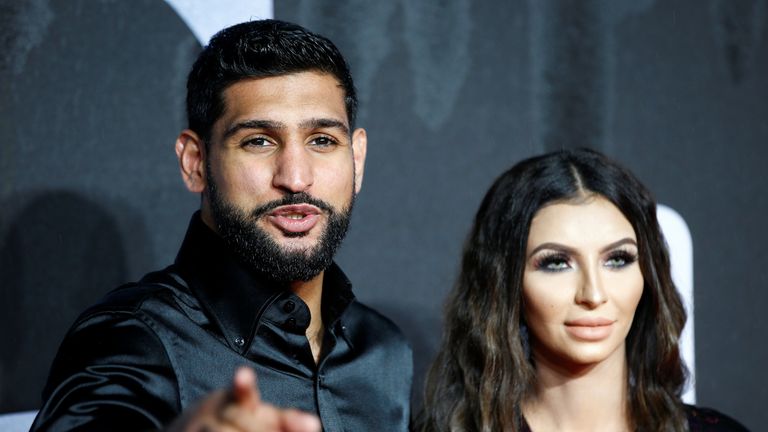 Image: Amir Khan and his wife Faryal were robbed at gunpoint in east London

Mr Khan, the former WBA and IBF light-welterweight champion, said he and Faryal were “both safe” following the incident.

He tweeted: “Just had my watch taken off me at gun point in East London, Leyton. I crossed the road with Faryal, luckily she was few steps behind me.

“Two men ran to me, he asked for my watch whilst having a gun pointed in my face.

“The main thing is we’re both safe.”

Anyone with information, or those who witnessed the incident, should call 101 quoting reference CAD 6753/18Apr. Alternatively tweet @MetCC or to remain 100% anonymous contact the independent charity Crimestoppers on 0800 555 111.

Mike Tyson ‘punches man in the face’ on plane