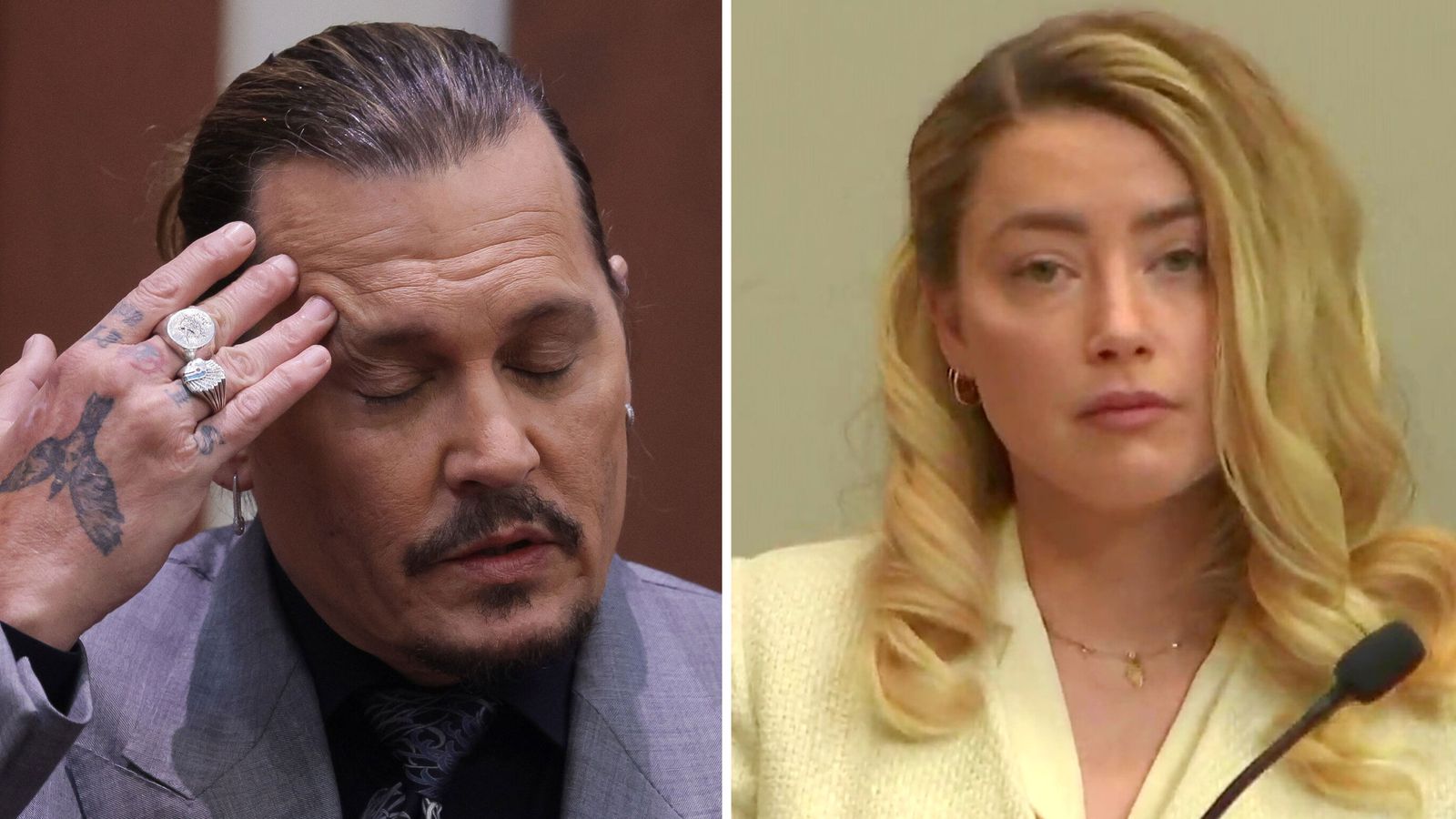 Johnny Depp has told a court it was his ex-wife Amber Heard who was violent and abusive in their relationship, not him – describing how she once injured him with a “roundhouse punch” and giving his side of the fight that led to his now infamous severed finger.

Speaking on the sixth day of his libel trial against the actress, Depp told the jury that Heard sometimes showed “pure hatred” for him and that arguments could “escalate” into her becoming violent – with a slap, a shove or a “glass of wine in my face”.

The actor said his former partner had a “need for conflict” and “couldn’t be wrong”, and would often use his children against him, calling him “a terrible father”. Image: Depp was animated in court as he answered questions for about six hours During his testimony, Depp gave his account of how he came to sever his finger during the couple’s Australia trip in 2015 – something that has come up several times during the trial already – saying Heard “hurled” one bottle at him and then threw another, causing the injury, which he described as “grotesque”.

The actress, who has not yet taken the stand, denies causing the wound. Depp told the court that he was “probably the closest I’ve ever been” to having a nervous breakdown after the tip of his finger was sliced off during the argument, recounting in graphic detail how his hand was left looking “like Vesuvius” as blood poured out.

Key points from Depp’s testimony – Day 6 of the trial

• Depp has once again denied physically or sexually abusing Heard during their relationship, saying it was the actress who became violent and instigated arguments
• The actor said he would often lock himself in the bathroom to retreat from escalating rows
• He said his now infamous severed finger was caused by Heard throwing a bottle at him – she is expected to refute this when she gives her testimony
• Jurors were shown graphic picture of Depp’s sliced finger in court
• Depp described one incident when Heard allegedly hit him, saying she caught him with a “roundhouse punch”
• Whatever the outcome of the trial, the actor says he will carry Heard’s allegations for the rest of his life
• Catch up on what has been said so far in our live reporting of the trial as it happens

The trial, which has seen various claims of drink and drugs binges, has been brought over a 2018 article Heard wrote in The Washington Post, which Depp’s lawyers say falsely implies he physically and sexually abused her. ‘It could begin with throwing a TV remote at my head’

Giving evidence for the second day in a row, Depp said that over time his marriage to Heard had begun to feel like he was “in a relationship” with his mother.

He said at times it seemed like Heard had “pure hatred” for him and that often it did “escalate into violence” – on her part. Asked what he meant by this, Depp said that Heard in her “frustration”, “rage” and “anger”, would sometimes “strike out”.

Depp said Heard engaged in “teenage high-school tactics” and that her “bullying” became too much.

Depp says he has ‘never’ struck a woman in his life

At one point during the day’s hearing in Fairfax, Virginia, Depp was asked about the first incident of alleged domestic violence that Heard says happened in early 2013.

The actress claims the alleged incident was sparked by her laughing at Depp’s “Wino Forever” tattoo – famously changed from “Winona Forever” after his split from actress Winona Ryder in the 1990s.

Depp told the court this “didn’t happen”, repeating earlier assertions that he never struck Heard and saying he had “never struck a woman in my life”.

The severed finger: ‘I was looking at my bone’

Speaking about the Australia trip in 2015, which took place shortly after Depp and Heard got married, the actor said this was “probably the closest I’ve ever been” to having a nervous breakdown.

Heard has previously claimed Depp was abusive during this trip and has described it as a “three-day hostage situation”. 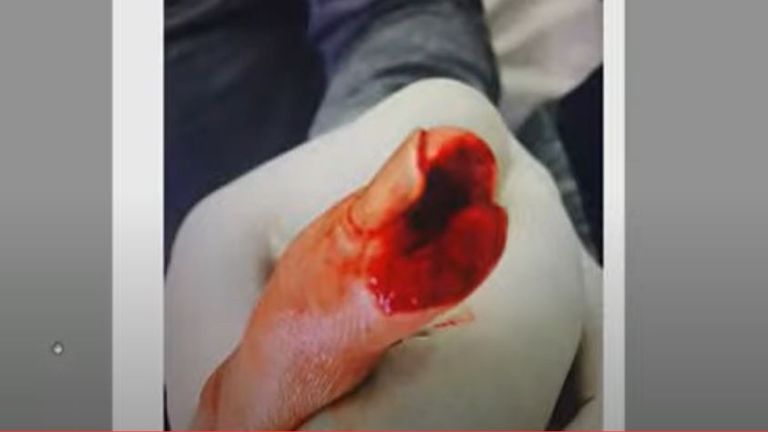 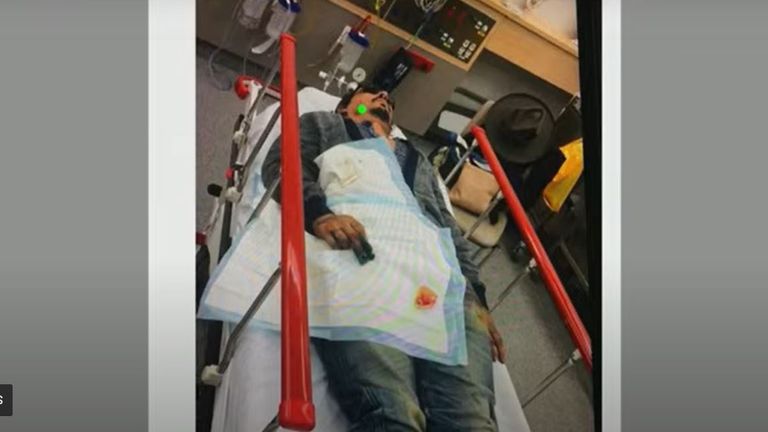 Depp accused her of throwing a bottle at him which shattered. He said he “felt no pain whatsoever” at first but looked down and realised what had happened.

“I looked down and realised that the tip of my finger had been severed and I was looking directly at my bone sticking out, and the meaty portion of the inside of your finger,” he told the jury.

“Blood was just pouring out and… I don’t know what a nervous breakdown feels like, but that’s probably the closest I’ve ever been. Nothing made sense.

“I knew in my mind and in my heart, this is not life. No-one should have to go through this.” 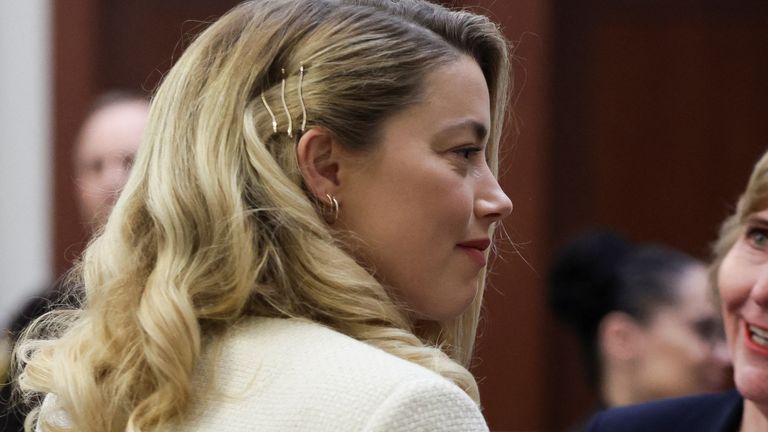 Image: Heard could be seen listening intently to Depp’s testimony – she will get her turn later in the trial

Jurors were issued with a warning as they were shown the picture of Depp’s injured finger, which was entered into evidence.

Depp told the court that in his state of shock he had written “little reminders” of Heard’s “lies” in blood on the walls of the property they were staying at.

The court was shown this photograph, which Johnny Depp says shows his face, bearing a bruise, following what he described as a “kind of a roundhouse punch from Ms Heard”. 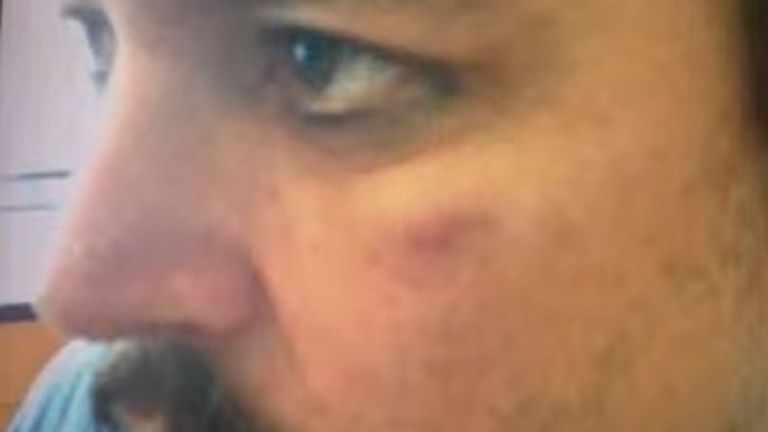 Image: Depp says this picture shows him with an injury caused by Heard

He said this was taken a couple of weeks after he sustained the finger injury in Australia.

Depp says there was a confrontation about “something or other” at his LA penthouse and that Heard was “trying to hit me, trying to do anything she could”. Heard’s sister Whitney was there and stepped in the way, he told the court, but the actress “got the roundhouse in and nailed me on the cheekbone”.

‘It controlled my every waking second’

Depp also told the court how Heard’s allegations of abuse have affected his life. When they were first made public, he says he felt “sick” watching as the story gained “momentum around the world”. He said he had to tell his children what to expect before they were shown articles at school.

You notice people “looking at you differently” and calls from agents and producers stop, Depp tells the court. “To say that it was unfair is about the largest understatement… it controlled my every waking second.” 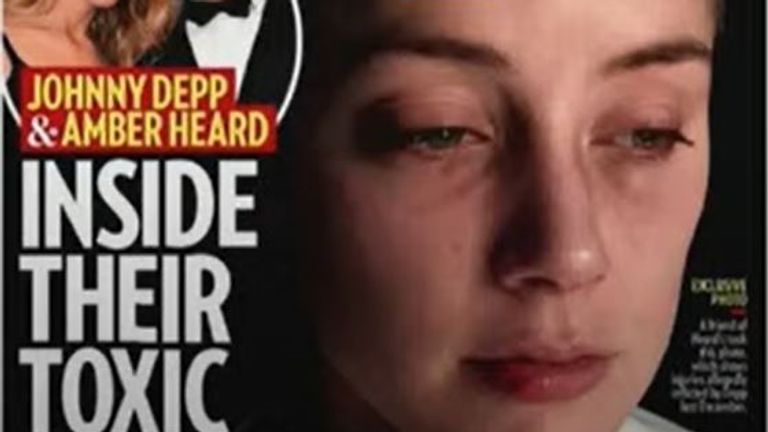 Image: A People magazine cover featuring Heard on the cover with bruising allegedly caused by Depp was shown to the jury

He went on to say that, despite the fact Heard’s Washington Post article didn’t mention him by name, it was “obviously” about him and their relationship.

Asked what he has lost because of the accusations, he replied: “Nothing less than everything.”

Depp told the court that no matter the outcome of this trial, he will carry these allegations “for the rest of my days”.

Cross-examination of the actor began in the final 30 minutes of Wednesday’s hearing and will continue on Thursday.