Tom Parker’s funeral: The Wanted carry his coffin as his widow says she will ‘treasure every memory’ of her ‘soulmate’ 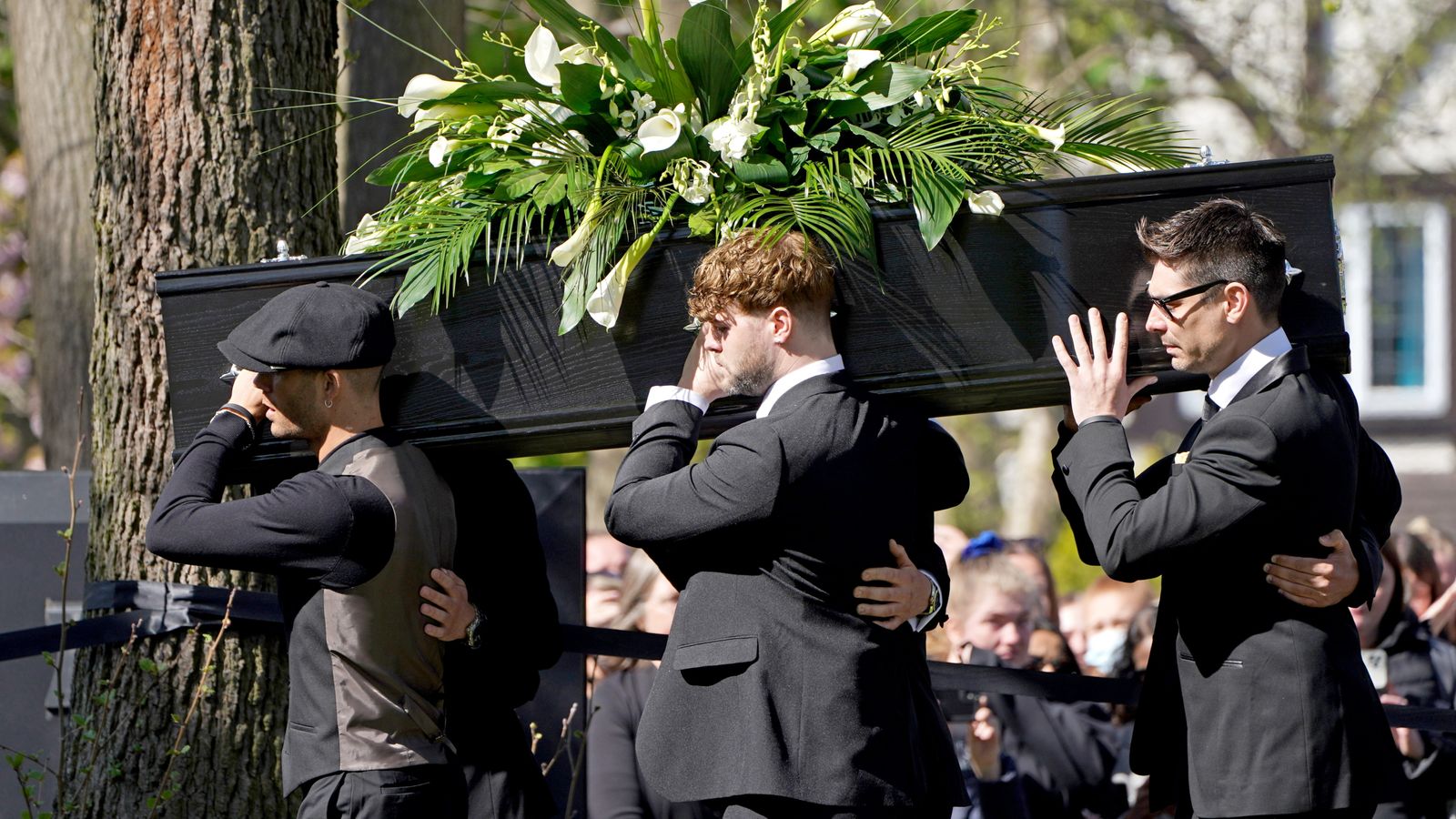 Tom Parker’s widow Kelsey has paid tribute to The Wanted singer as her “soulmate” during his funeral, saying: “Marrying you was the best day of my life.”

Family members, his bandmates, and other close friends attended the private ceremony at St Francis of Assisi church in southeast London.

The Wanted’s Jay McGuiness, Max George, Siva Kaneswaran and Nathan Sykes served as pallbearers, carrying his coffin into the church, as Champagne Supernova by Oasis was played to fans gathered outside. 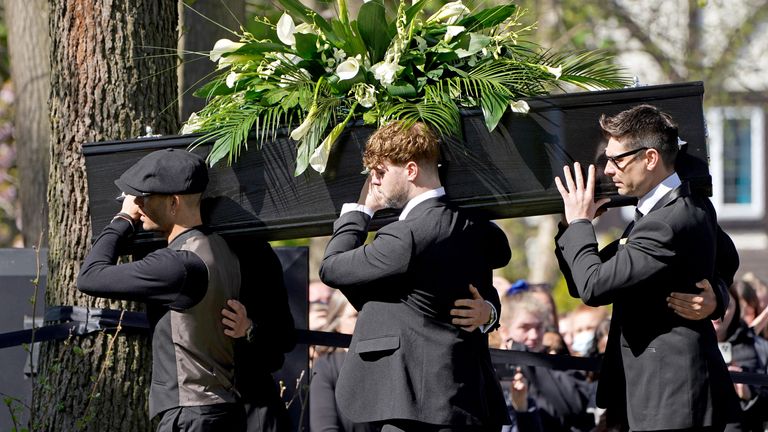 Image: Max George (L) and Jay McGuiness (centre) from The Wanted were among those who carried the coffin at the funeral of their bandmate Tom Parker

Parker’s widow, whom he married in 2018, led a cortege featuring three black horses through Petts Wood on Wednesday morning as hundreds of fans lined the streets for the procession before the service in Queensway.

Other pallbearers carefully removed multicoloured “Daddy” flowers from the horse-drawn carriage, taking them inside the church before removing a heart-shaped red rose piece spelling “Tom” from the hearse. Image: Kelsey Parker at the funeral of her husband Tom 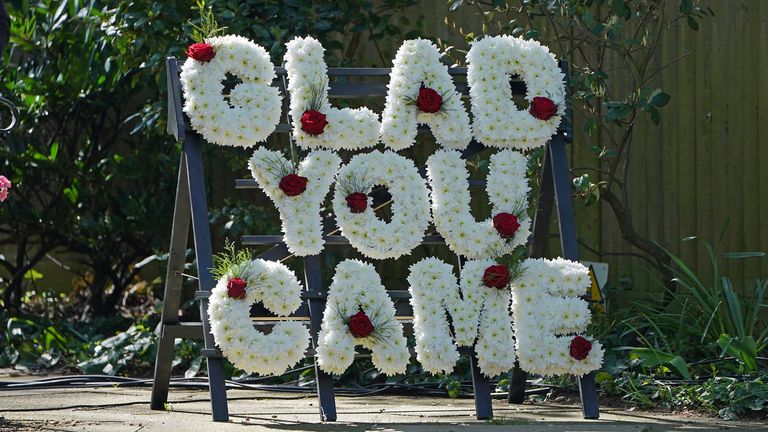 Image: A tribute of flowers outside the church titled Glad You Came after The Wanted’s hit song

Parker, 33, died in March, surrounded by his family and bandmates, 17 months after he was diagnosed with an inoperable brain tumour.

‘Life with you was never dull’

During the service in a pre-recorded message, Mrs Parker shared anecdotes about how the couple first met at a nightclub before he shot to fame.

She said: “I will treasure every memory because life with you was never dull”. 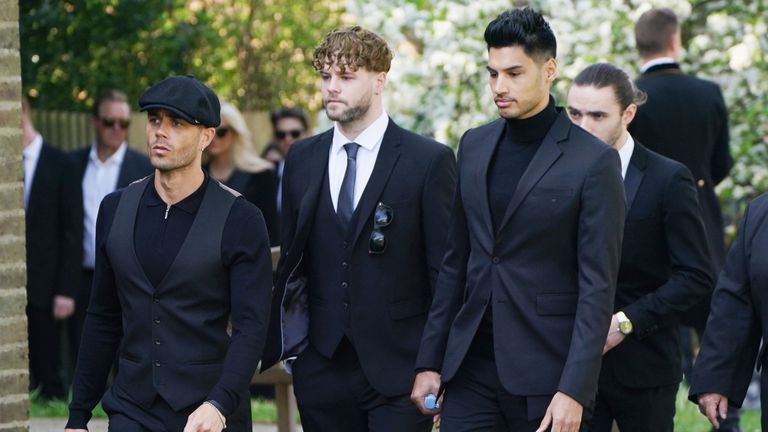 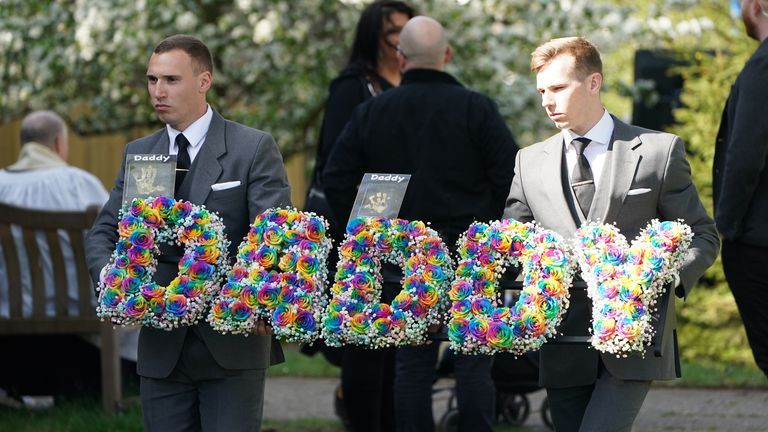 Image: A tribute with the word ‘daddy’ is carried into St Francis of Assisi church

Mrs Parker added that the star was her “soulmate” and marrying him “was the best day of my life”.

Addressing the congregation, George said he will always remember the singer’s laugh.

“He has left us far too early and we will miss him so much. The people outside, the people all around the world, is a credit to him you. Rest easy mate,” he added.

Flowers which spelled out the words Glad You Came, the title of The Wanted’s 2011 hit, were also seen outside the church. 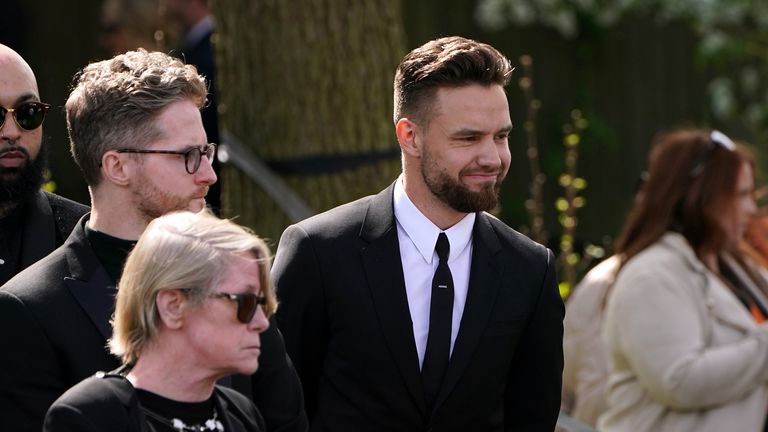 Mrs Parker invited fans to gather to watch the service outside on big screens while the funeral was attended by close friends and family.

Liam Payne from One Direction was given a round of applause from fans outside the church.

Fans dressed in black gathered along the high street to pay their respects before falling silent as his coffin was placed into the horse-drawn carriage. 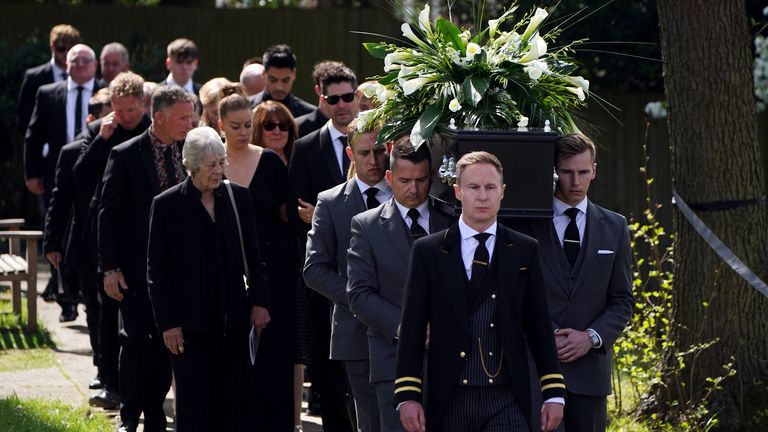 Image: Parker disclosed in October 2020 that he had been diagnosed with stage four glioblastoma 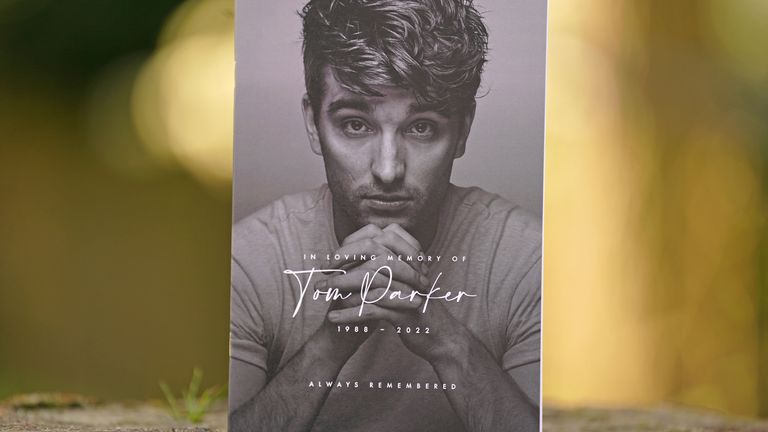 Image: The order of service for the funeral of Parker in Queensway, Petts Wood Image: Mourners outside St Francis of Assisi church ahead of the funeral

Super-fan Stefanie Marek, 29, had flown from Austria on Tuesday to witness the funeral procession.

She said she “can’t believe he is gone” and thought she would “come out here and pay respects to him and give my condolences”.

“They all grew really dear to me and now that Tom’s gone physically it really hit hard because you didn’t expect it to happen so soon, especially at 33 years of age”, she added. 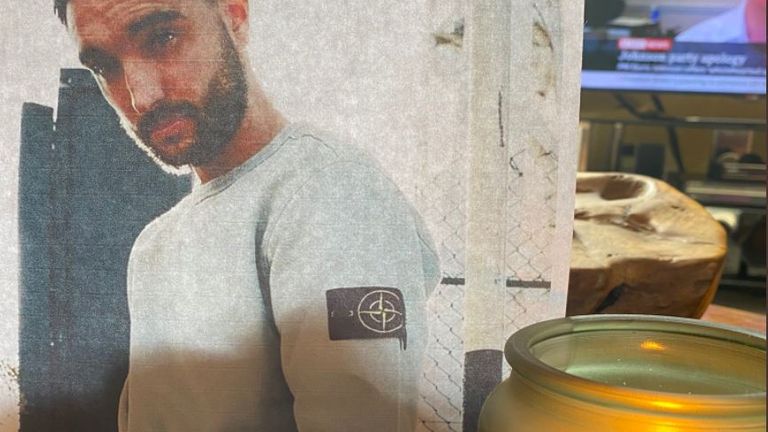 Image: The Wanted fan, Saskia Masaun, lit a candle for the star

‘He was my childhood really’

Receptionist Chloe Mayne, 25, from Plumstead, a self-professed “super-fan” of the late singer, said the day he died “it really hit me”.

Ms Mayne said she was 15 when she became a fan of the British-Irish boy band and had attended around 25 of their concerts, adding: “He was my childhood really.”

Saskia Masaun, 20, from Wolverhampton, told Sky News that she put Mrs Parker in a healing book of prayers at her local spiritualist church and lit a candle for the star.

Steve Barney, who drummed for the band during their early tours and festivals, said Tom Parker had “such a driving force, both on and off stage”.

He posted images of the singer on stage, adding that he was thinking of Mrs Parker and their children on the day of the funeral.

The Wanted fan, Donna Wareing, told Sky News that everyone will “miss Tom so much” and shared a picture of herself and Parker from a concert in 2010. 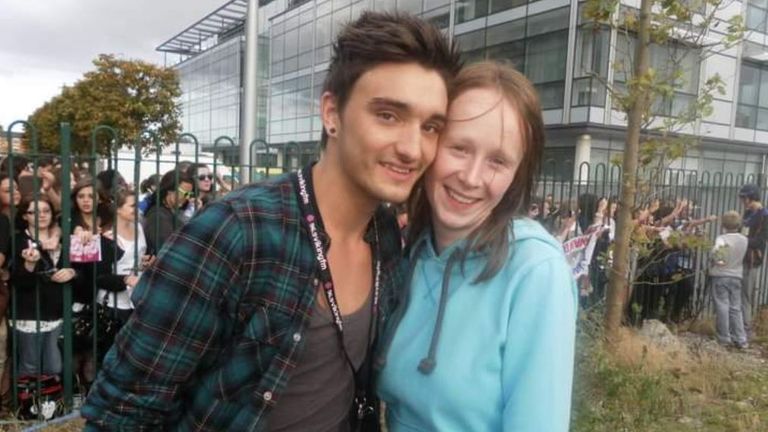 Image: Tom Parker pictured in 2010 with a fan of The Wanted, Donna Wareing

Parker disclosed in October 2020 that he had been diagnosed with stage four glioblastoma and had begun radiotherapy and chemotherapy.