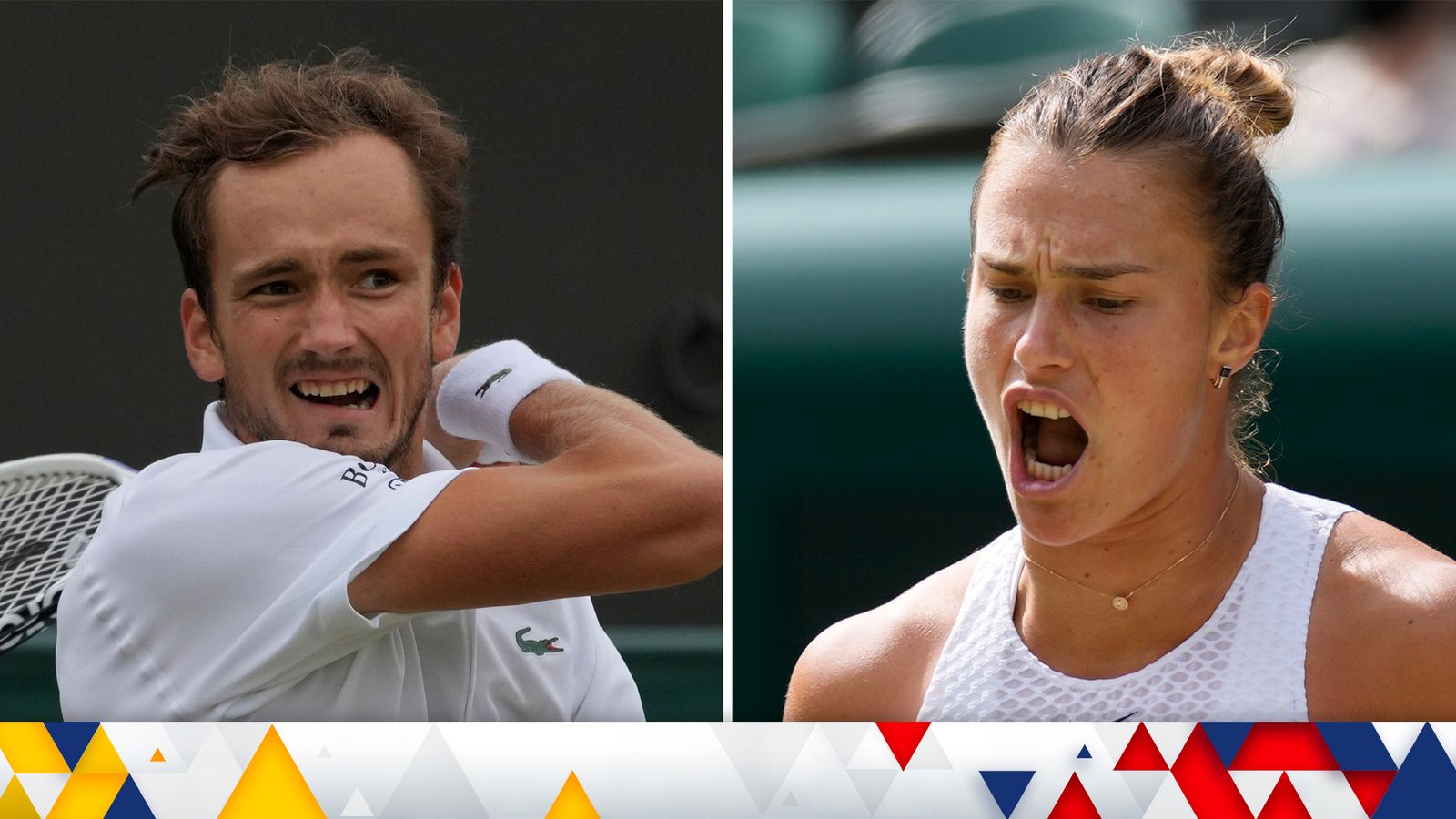 Russian and Belarusian tennis players have been banned from competing at Wimbledon this summer because of Vladimir Putin’s “unjustified” war in Ukraine.

Stars including men’s world number two Daniil Medvedev and number eight Andrey Rublev, both of Russia, and women’s number four, Belarusian Aryna Sabalenka, will no longer be allowed to play in the third grand slam of the year.

The All England Club, which holds the tournament in southwest London every summer, is the first tennis organisation to refuse Russian And Belarusian players outright. 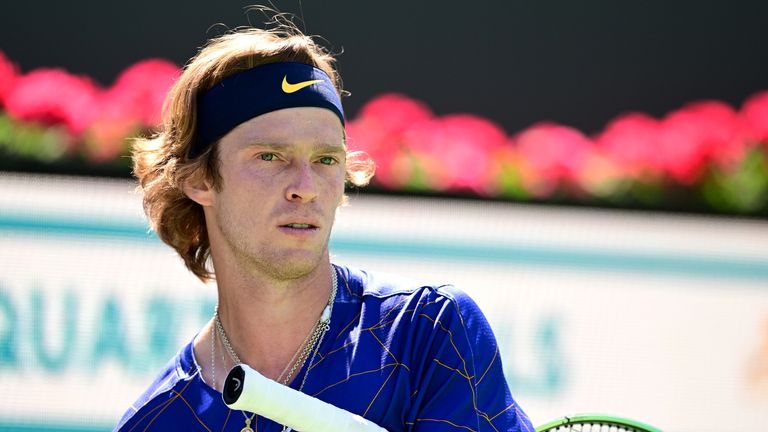 In a statement, chairman Ian Hewitt said: “We recognise that this is hard on the individuals affected, and it is with sadness that they will suffer for the actions of the leaders of the Russian regime.

“We have very carefully considered the alternative measures that might be taken within the UK government guidance but, given the high profile environment of the championships, the importance of not allowing sport to be used to promote the Russian regime and our broader concerns for public and player (including family) safety, we do not believe it is viable to proceed on any other basis at the championships.”

However, the Association of Tennis Professionals (ATP) said Wimbledon’s decision to exclude players from Russia and Belarus “is unfair and has the potential to set a damaging precedent for the game”.

A number of tennis stars impacted by ban

The news comes as Russia faces continued pressure from the West to end its war in Ukraine, which has forced millions of people to flee their homes.

Russians Anastasia Pavlyuchenkova (ranked women’s world number 15), Daria Kasatkina (26) and Veronika Kudermetova (29) are among those affected by the ban.

The Belarusian players Sabalenka (4) and Victoria Azarenka (18) are also excluded.

Belarus has been supportive of President Putin’s war efforts, hosting Russian troops and allowing them to use the country as a staging ground.

The Kremlin has said the ban is unacceptable and that the tournament itself will suffer. 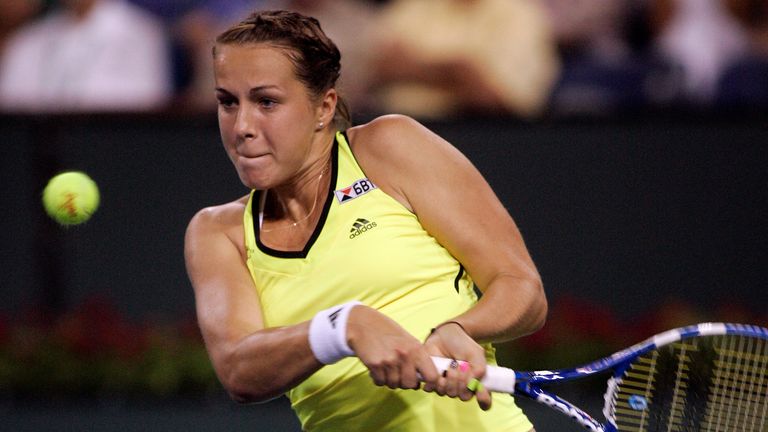 Image: Anastasia Pavlyuchenkova is also impacted by the ban

LTA: Participation of Russian and Belarusian nationals ‘risks providing a boost’ to regimes

The Lawn Tennis Association (LTA) echoed the comments from the All England Club, saying that after “careful consideration” it believes the sport must join others in sending a “clear signal” to the Russian and Belarusian states.

In a statement they added: “The continuing participation of Russian and Belarusian nationals at events risks providing a boost to these regimes when there is an unprecedented international effort to isolate them and sanction their actions.”

The LTA said it recognised that individual Russian and Belarussian players may not agree with the actions of their governments but added that the association must do all it can to support Ukraine.

Analysis: Not hard to see how it could have become a big distraction

The idea that Russian and Belarusian players could play at Wimbledon this summer as neutrals wasn’t ever really going to work.

The requirement would have been for them to sign a form to confirm their neutrality, making clear they weren’t receiving state funding.

They would also have had to promise not to declare their support for the invasion of Ukraine or the Russian regime.

They are hoops that the players would have jumped through – many of them have already publicly called for peace.

It’s not hard to see though how it could quickly have become a big distraction.

By opting for an outright ban, they will face the anger of those affected players, but crucially the All England Lawn Tennis Club has moved to protect their tournament after two years of COVID-19 disruption.

To have a Russian or Belarusian winner this year would have been awkward in the extreme.

There are some big names who will now miss out in both the men’s and the women’s competitions – players who are still competing in other parts of the world.

Wimbledon though has chosen to go further and to follow the UK government’s lead of doing everything possible to punish Russia over the invasion of Ukraine.

Last month, sports minister Nigel Huddleston suggested Medvedev and his fellow Russian players should not be allowed to compete unless they somehow assured the government that they did not support President Putin.

In February, Medvedev said he was “all for peace” after his quarter-final victory over Japan’s Yoshihito Nishioka in the Mexican Open.

A day later Rublev made headlines after writing “no war, please” on a TV camera after defeating Poland’s Hubert Hurkacz at the Dubai Tennis Championships.

What other sports events have Russia been banned from?

Russian athletes and teams have been suspended and sanctioned by a number of sporting bodies over the war in Ukraine.

Russian Paralympians were blocked from the Winter Paralympics shortly after the invasion began, and Russian and Belarusian runners were not allowed to enter the Boston Marathon.

Russia’s football team was removed from qualifying for the men’s World Cup later this year and in February the International Olympic Committee recommended barring Russian athletes from international competition, which led to teams and individuals being removed from dozens of major sporting events.

Some Russian athletes have faced scrutiny for displaying the ‘Z’ symbol associated with the country’s invasion of Ukraine.

Last month, the gymnast Ivan Kuliak was criticised for wearing the symbol, thought to mean “for victory”, on the podium next to a Ukrainian competitor.

He later told Russian state media that he had no regrets.