Matt Hancock has said it was his decision to resign as health secretary after being caught breaking lockdown rules by kissing his aide Gina Coladangelo – contrary to Boris Johnson’s version of events.

The former government minister told Sky News’ Beth Rigby Interviews programme that he chose to stand down from his role after CCTV images of the lockdown-busting clinch emerged.

But last summer, Mr Johnson suggested it was his decision to remove the disgraced former health secretary from his Cabinet.

Asked by reporters on a visit to Batley and Spen in June whether Mr Hancock’s relationship with then-Department of Health board member Ms Coladangelo had undermined public health messaging amid the pandemic, Mr Johnson said: “That’s right, and that’s why when I saw the story on Friday we had a new secretary of state for health in on Saturday.”

But Mr Hancock told Sky’s political editor Beth Rigby: “No, I wasn’t forced by anybody to resign. I chose to resign.”

The former health secretary added that he believes Mr Johnson should resist calls to resign as prime minister as he is the right person for the job.

It comes as the prime minister is to face a parliamentary investigation into whether he misled MPs about lockdown-breaking parties at Downing Street after MPs backed a Labour-led motion calling for the privileges committee to examine allegations the prime minister misled the Commons when he denied lockdown rules were broken.

The investigation will not begin until Scotland Yard’s inquiry has finished.

The prime minister has faced persistent calls to resign over partygate and apologised to MPs this week in a performance high on contrition. 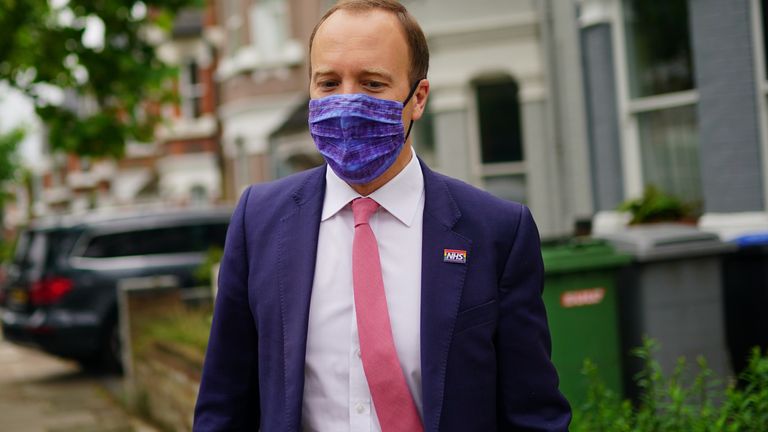 Image: Matt Hancock added that he regrets limiting the numbers that could attend funerals during lockdown

Discussing his decision to resign, Mr Hancock continued: “And in a way, it makes the point more powerfully, that in the prime minister, you have to look at who is best placed right now to be leading this country with the challenges that we face – and especially the response to Vladimir Putin, is the single most important international thing going on right now – and responding to the cost-of-living crisis domestically.”

He continued: “I understand that anger and the prime minister has apologised.

“And you’ve got to look at where we are now and what’s happening now in the world, and we’re in this phase of history where big things keep coming along.

“And we’ve got to make sure I was like, what is in the national interests? That is what matters right now.”

In a blow to Mr Johnson, former minister Steve Baker, an influential Conservative MP, earlier said the prime minister “should be long gone”.

Mr Baker, who was a prominent Brexiteer involved in ousting Theresa May, said: “Really, the prime minister should just know the gig’s up.” 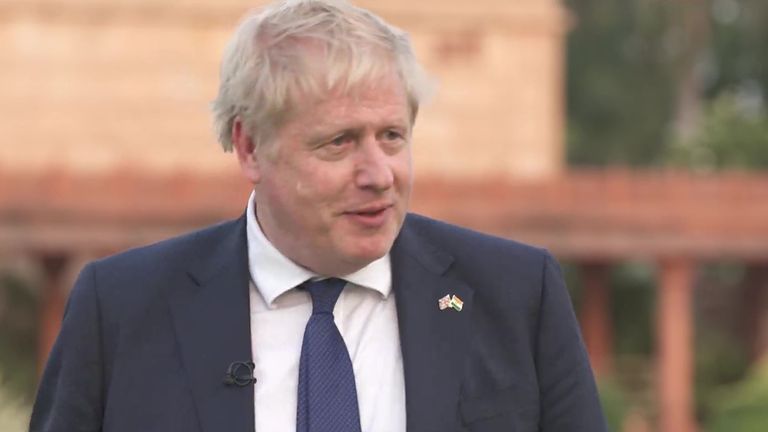 1:08 Boris Johnson says he has ‘nothing to hide’ on partygate.

Mr Johnson earlier insisted he has “nothing to hide” over partygate.

Mr Hancock refused to tell Sky News whether he wants the people suspected of leaking the footage of him and Ms Coladangelo to be prosecuted.

He also avoided questions on his previous comments that he was left speechless when former government adviser on coronavirus Neil Ferguson was caught breaking lockdown rules and that it was right for him to resign.

Beth Rigby Interviews is on Sky News on Thursday at 9pm.

‘No question’ of PM quitting, regardless of demands for him to go, says minister