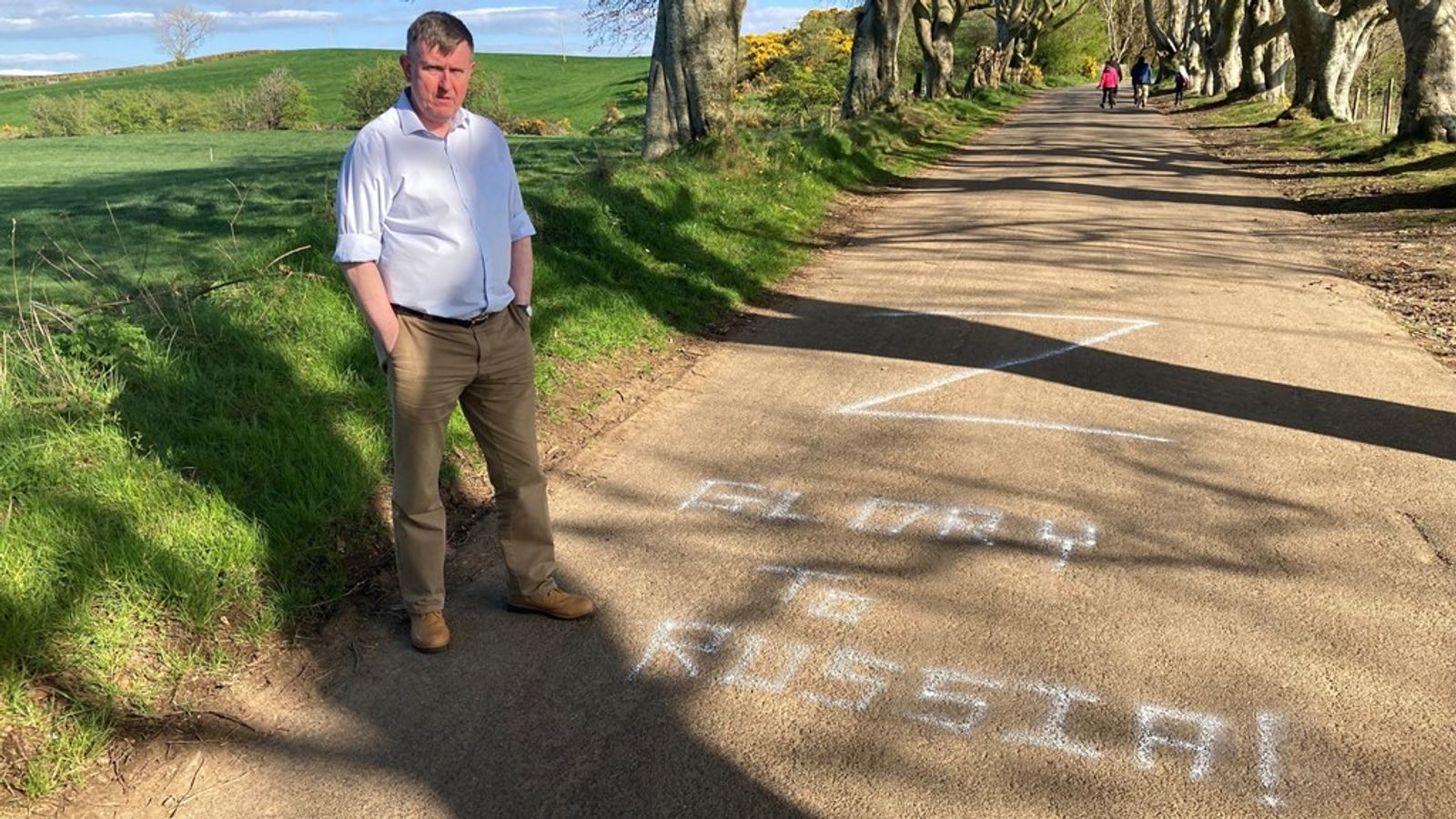 Police in Northern Ireland are investigating after pro-Russian graffiti was daubed on a road at a famous Game of Thrones filming location.

The unique tree-lined Dark Hedges site, in County Antrim, became one of Northern Ireland’s most popular tourist attractions after being featured in the hugely popular HBO fantasy series.

Over the weekend, the slogan “Glory to Russia!”, and a large Z was painted on the road. The Z symbol has become synonymous with Russian forces in the war in Ukraine, appearing on many of the country’s armoured vehicles as an identifying mark.

Local DUP politician Mervyn Storey said: “This is a wanton act of vandalism at one of Northern Ireland’s most iconic locations.

Explainer: Why is Russia using the letter ‘Z’ and what does it mean?

“It is completely at odds with the warm welcome our local community provide to tourists from all over the world who come to see what the Dark Hedges and the North Coast have to offer.

“This week I was pleased to be able to welcome refugees from Ukraine into my own church community. It is despicable that they should have to encounter this type of behaviour glorifying Russia’s oppressive campaign of terror in their homeland. Our support must be with the people of Ukraine.

“I will be working closely with local authorities and the PSNI to ensure this graffiti is removed immediately and those responsible held to account.”

The Police Service of Northern Ireland (PSNI) confirmed it had received a report of vandalism at the Dark Hedges site.

It’s not the first incident of pro-Russian support, and use of the Z symbol. Two weeks ago, the Ukrainian embassy in Dublin described a parade of cars displaying Russian flags and the Z symbol as “absolutely disgusting.”

A convoy of least a dozen cars drove through North County Dublin, with video appearing on social media platforms Telegram and TikTok. A Land Rover had a large Z daubed on its bonnet, with most others flying Russian or Soviet flags from windows.

The embassy tweeted that “it’s absolutely disgusting that these Russians living in (Ireland) demonstrate their complete disrespect for country of residence and the Irish people who stand against Russia’s war in Ukraine.

“Z, the symbol of killings & atrocities, must be prohibited by law in every democratic state.”

It’s believed Russians in Ireland are planning another “auto-parade” showing their support of the invasion of Ukraine on 7 May.