The winners of the BAFTA Television Craft Awards have been announced, with murder drama Landscapers and music comedy We Are Lady Parts dominating the event.

The awards celebrate behind-the-scenes talent in the television industry and were hosted by Mel Giedroyc on Sunday, ahead of the BAFTA TV Awards in May.

She said the gong was a “massive thank you” to Channel 4. “I didn’t go to film school or anything so my first writing gig was with Channel 4 on a scheme and they really believed in me from the beginning,” she said.

“When all the broadcasters passed on We Are Lady Parts, Channel 4 didn’t – so this is really a thank you to Channel 4 for believing in us.”

Starring Oscar winner Olivia Colman and Harry Potter star David Thewlis, Sky drama Landscapers tells the real-life story of a woman and her husband who killed her parents and buried their bodies in their garden, where they remained undiscovered for more than a decade.

Composer Arthur Sharpe won the award for best original music for the series, while the show’s photography and lighting and production design teams were also honoured.

Read more:
Olivia Colman on the bizarre real-life murderers behind Landscapers
It’s A Sin star on contracting HIV at 16
Will Channel 4 sale lead to shows losing their edge?

It’s A Sin – another Channel 4 show, which leads the nominations for the BAFTA TV Awards, picked up two prizes during the ceremony – editing (fiction) and director (fiction) for Peter Hoar.

Starring Olly Alexander as one of a group of gay friends navigating the UK’s HIV/Aids crisis in the 1980s, and written and created by Queer As Folk and Doctor Who screenwriter Russell T Davies, it was released to critical acclaim at the beginning of 2021. 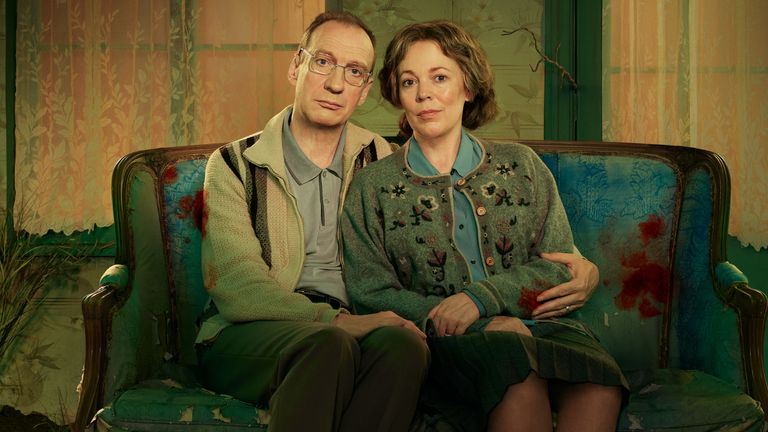 BAFTA chairman Krishnendu Majumdar addressed the planned privatisation of Channel 4 as he opened the ceremony, saying that “we cannot afford to lose” public service broadcasting.

“The way we make TV in this country is unique, a delicate ecosystem of different broadcasters and newer streaming platforms,” he said.

“While we welcome and embrace evolution, we should also cherish public service broadcasting. It is the bedrock of distinctiveness and independence of thought in this country, it is the very fabric of our culture and values.

“Its been said to poison a nation, poison its stories. We cannot let that happen, its too precious and should be above politics, we cannot afford to lose it.” Other shows to be recognised during the ceremony included Netflix’s The Witcher, starring Superman actor Henry Cavill, which received awards for make-up and hair design and special visual and graphic effects, and BBC One’s A Very British Scandal, starring Claire Foy and Paul Bettany, which picked up the prize for sound (fiction).

Emerging talent was also celebrated, with director Adjani Salmon winning in the fiction category for comedy series Dreaming Whilst Black, while factual director Adam Brown was honoured for Into The Storm.

The award for best entertainment craft team was presented to the Royal British Legion Festival Of Remembrance.

Air passengers should get more protection for disruptions like COVID-19, MPs say