Amber Heard suffered from “histrionic and borderline personality disorders” and “grossly exaggerated symptoms of PTSD” according to a clinical and forensic psychologist who assessed her mental state following her split from Johnny Depp.

Doctor Shannon Curry told the court she had originally been approached by Depp’s legal team to help ascertain whether there was evidence of “intimate partner violence” within the couple’s relationship but was later was asked to complete “a psychological analysis” of the actress. She said borderline personality disorder was “a predictive factor in women who implement violence against their partner,” adding that “one tactic is physically assaulting and then getting hurt themselves… then using the legal system… for example using a restraining order”.

It is widely known that Heard filed a temporary restraining order against Johnny Depp in May 2016.

Here are some of the key points from the ninth day of testimony:

• Bahamas estate manager says she saw Depp with ‘bruised nose’ after actor said Heard ‘threw a can at him’
• Court hears Heard called Depp ‘a washed-up actor’ who would ‘die a fat, lonely old man’
• Disastrous family trip with Depp’s kids on yacht later sold to JK Rowling described
• Police officer says she saw no signs of domestic violence after alleged incident in LA
• Couple’s relationship is yet again labelled ‘toxic’
• Catch up on what has been said so far in our live reporting of the trial as it happens

‘Taking a victim or princess role’

Doctor Curry also said that patients with histrionic personality disorder were “very, very interested in their looks” and frequently used them “to get what they want”. She said it was common for people with such personality disorders to take on “a victim or princess role”, sometimes making up stories to “get respect and attention that way”.

She clarified that a “personality disorder” was an “enduring trait” affecting “all facets of a person’s life”, unlike mental disorders such as depression which she said were “episodic” and “would come and go”.

She listed what she considered to be some of Heard’s personality traits, including “passive aggressive behaviour and self-indulgent and self-centred behaviour”, as well as being “full of rage, inner anger and blame”.

Additionally, Doctor Curry described Heard as “grossly exaggerating symptoms of PTSD”, saying that when the questions she put to her “seemed random” she believed that Heard tried to “minimise” any impression of a disorder, but when questions put to her revolved around trauma she felt Heard would “exaggerate”.

She said the actress had initially claimed she suffered from 19 of the 20 symptoms of PTSD, which she said would not even be “typical of someone suffering from even the most disabling form of PTSD”. 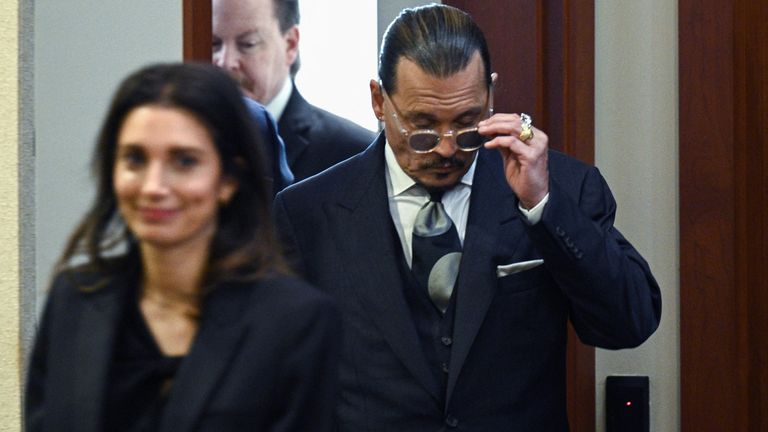 Image: Depp finished giving evidence earlier on Monday, and has been listening to evidence today

Doctor Curry said her analysis of Heard was based on evaluating a host of medical and legal documents and two in-person meetings with Heard in December 2021, which she said totalled 12 hours.

She said she used “the Minnesota Multiphasic Personality Inventory Volume 2” (MMPI2) to reach her diagnoses (a series of 567 true or false statements) and that it was “the most commonly used assessment worldwide by mental health professionals and in forensic setting for the court”.

Calling Heard “the 36-code type” she said such individuals showed traits including “a lot of cruelty, being very concerned with their image, very attention seeking and prone to externalising blame to a point where it’s unclear whether they can admit to themselves they have certain responsibilities”.

She also said they had “a lot of supressed anger which can explode out and issues within their relationships”.

The doctor went on to say that such a person was “terrified of abandonment” and would do almost anything to avoid it. 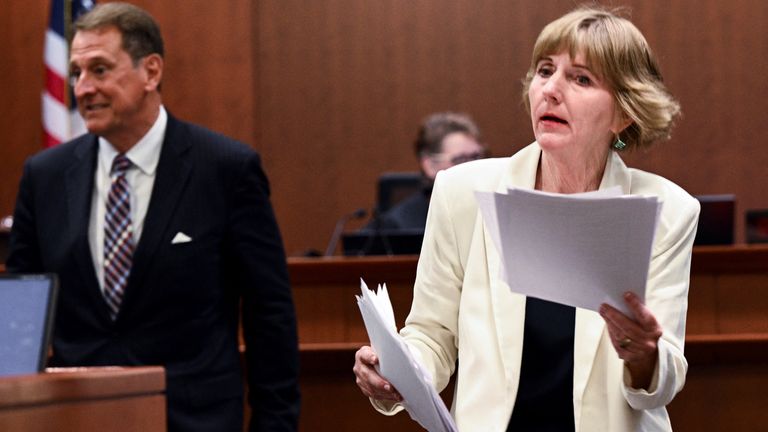 ‘Dinner and drinks’ with Depp and muffins with Heard

However, during cross examination of Doctor Curry from Heard’s team, the “highly irregular” practice of meeting with a subject in litigation was called out, with the doctor’s decision to go for “dinner and drinks” at Depp’s house ahead of agreeing to work for him criticised.

Heard’s lawyer, Elaine Bredehoft, also claimed the doctor was “so excited [about taking on the high-profile case] that she told her husband she was going to be conducting an examination of Amber Heard” although it was “a highly confidential matter”.

Doctor Curry said that was not the case, she merely asked her husband to “pick up muffins because I was running late”, adding that she and Heard “enjoyed the muffins together”.

Heard’s team also put it to her that she would not have been hired to testify had she not found the actress to be suffering from some form of disorder. Doctor Curry rebuked that theory, saying her diagnoses were based on evidence. Image: The court was told the actress called Depp a ‘washed-up old actor’ who would ‘die a fat, lonely old man’

She says Depp accuse Heard of “hitting me with a can” and that he had “bruising on the bridge of his nose”.

During the row, Ms Roberts said she could see Heard “clawing, grabbing at [Depp’s] clothes… trying to viciously pull him back”, while Depp “didn’t react” and “stood there with his arms by his side” not doing anything.

She said she that she took Depp away from the situation to a café on the island, where she put an ice pack on his nose and he “slept for the rest of the morning”. 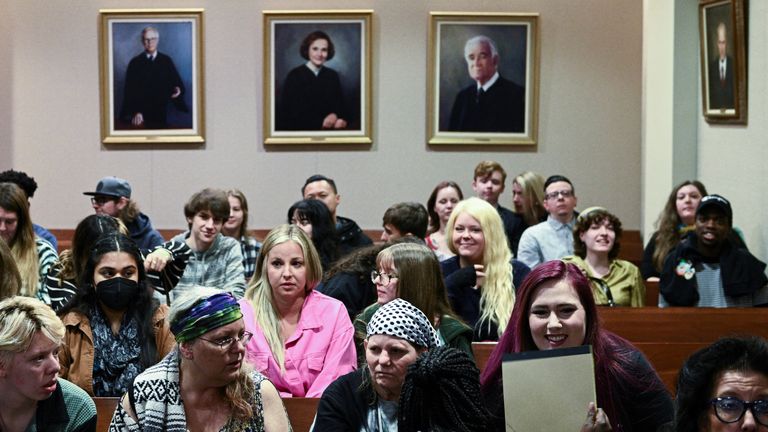 During cross-examination by Heard’s team, Ms Roberts was asked about “a trip on the yacht that Depp was going to be selling to JK Rowling”.

The court was told that this was one day in July 2013 when Depp, Heard and Depp’s two children Lily-Rose and Jack were out on a trip together, but Lily-Rose became “upset because her father was drinking and trying to hide it from her”. A helicopter had to be organised to collect her from the yacht.

Ms Roberts confirms this took place. She is also asked to confirm another occasion when Depp “passed out face first in the sand” in front of his son Jack. She says it did happen and she helped Depp onto hammock and left to him to recover, however she says she doesn’t know if Jack was “upset” by it as she didn’t talk with him about it afterwards.

Ms Roberts also testified that she lived in her own property rather than with Depp on the island, and so “wouldn’t know whether Mr Depp was taking drugs and wouldn’t know if Mr Depp was drinking”. However, she said she would know who consumed what “from cleaning up… From what was in the garbage and what was left out…”

She confirmed the actor had “a huge tolerance for alcohol”. 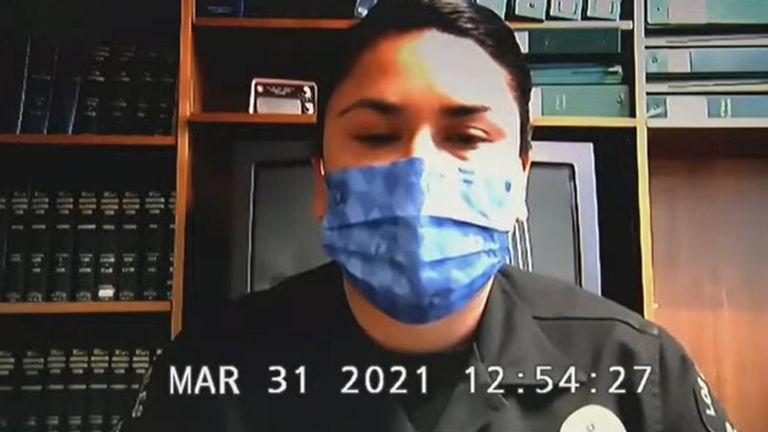 Image: LAPD officer Melissa Saenz told the court she saw no signs of a crime or of domestic violence. Pic: Court TV

Police officer on the scene

We also heard from an LAPD officer who attended Depp’s penthouse in Los Angeles on 21 May 2016, after Depp and Heard allegedly fought, and Heard’s legal team say a mobile phone was thrown at the actress’s face.

In a recorded deposition, Officer Melissa Saenz repeatedly told both Depp and Heard’s legal teams that she had “not seen or heard anything that made her think a crime had been committed or an act of domestic violence had occurred.”

She that was why she had not completed a report on the incident, despite it being police policy to file reports on any suspected incident of domestic abuse.

Officer Saenz testified that she could see no evidence of disorder in the Depp’s penthouse or injury on Heard. Depp was not at the apartment at the time the officer attended.

Depp is suing his ex-wife for $50m (£38.2m), over an opinion piece she wrote for the The Washington Post in 2018 which his lawyers say falsely implies he physically and sexually abused her.

The former couple started dating after meeting on the set of the 2011 film The Rum Diary and married in Los Angeles in February 2015.

Ms Heard’s Washington Post article did not mention Depp by name but was titled: “I spoke up against sexual violence – and faced our culture’s wrath.”

The trial in Fairfax County, Virginia, is scheduled to last six weeks.

Housing: Every seven minutes a private renter in England is given eviction notice even though they have done nothing wrong, figures reveal