Madeleine McCann: Parents of missing girl mark 15 years without her with poignant Winnie The Pooh quote 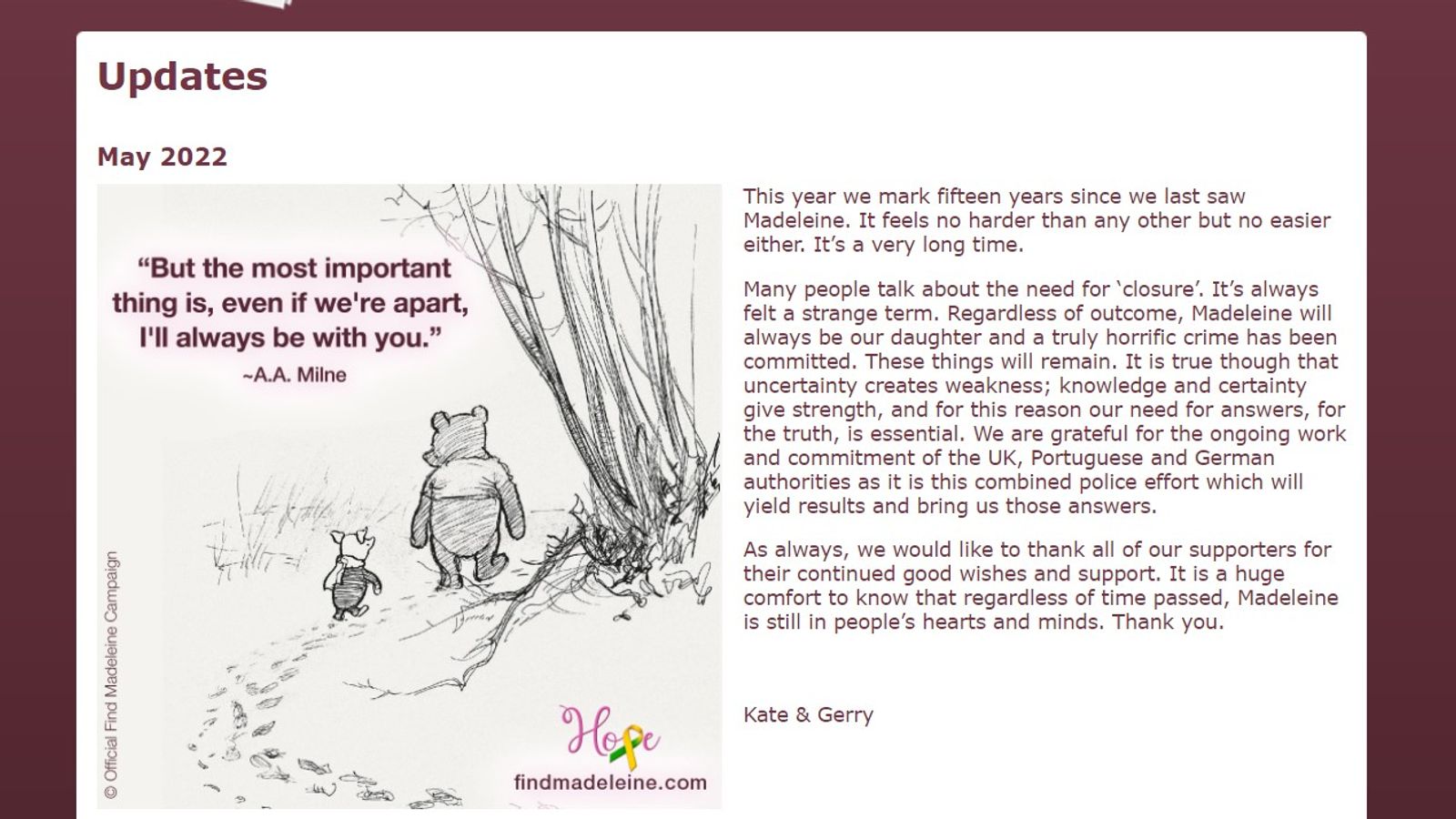 The parents of Madeleine McCann have used a quotation from the Winnie the Pooh children’s stories to illustrate their thoughts on the 15th anniversary of their daughter’s disappearance.

The caption, to a drawing of Pooh and his friend Piglet, posted on the Find Madeleine website reads: “But the most important thing is, even if we’re apart, I’ll always be with you.”

Kate and Gerry McCann also wrote: “Regardless of outcome, Madeleine will always be our daughter and a truly horrific crime has been committed. These things will remain.

“It is true though that uncertainty creates weakness; knowledge and certainty give strength, and for this reason our need for answers, for the truth, is essential.”

They added: “We are grateful for the ongoing work and commitment of the UK, Portuguese and German authorities as it is this combined police effort which will yield results and bring us those answers.” Image: Kate and Gerry McCann: ‘Our need for answers…is essential’

Madeleine, who was three, vanished from the family’s rented holiday apartment in Praia da Luz, Portugal, on 3 May, 2007.

There has been no trace of her since, though her parents cling to the hope she will be found alive.

Their words were published as the man suspected of abducting Madeleine insisted he was many miles from the scene having sex in his camper van with a young woman who would back his alibi.

Christian B says he drove her to the airport at Faro for a flight home the next day and they were stopped and photographed at a police roadblock.

The suspect, a German drifter, claims she was arrested at airport security for carrying an illegal pepper spray and later appeared in court.

Christian B, as he is known under German privacy laws, believes Portuguese police must have a record of those events that will establish his relationship with the young German woman who was on holiday with her parents. 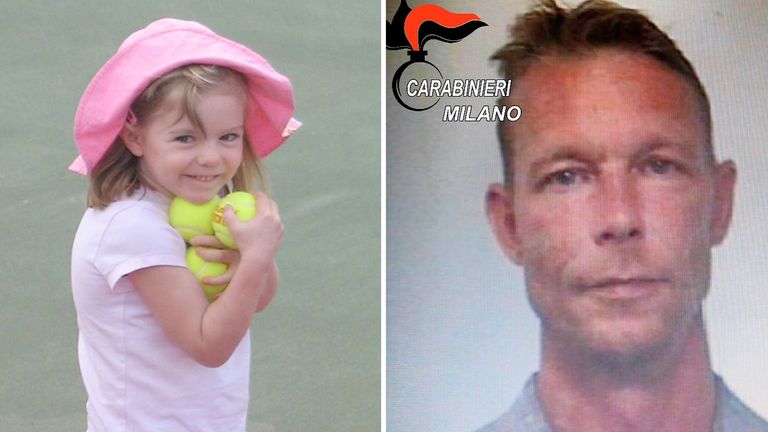 3:01 Christian B Insists he has an alibi

Apparently, German police found a photograph of the woman lying in his camper van during their investigation into a rape for which Christian B is now serving a seven-year jail sentence in Germany.

When he first spoke of his alibi, he couldn’t recall the woman’s full name, but it’s understood he has since been able to identify her.

If it’s true, the alibi would contradict vital, but circumstantial evidence from mobile phone data masts that police say puts him close to the apartment from where Madeleine vanished from her bed. According to officers, the suspect’s mobile phone was in the village when it received a call from 7.32pm to 8.02pm. Madeleine’s parents said she disappeared between 9 and 10pm. Christian B insists that by 10pm he had driven miles along the coast east towards Faro.

‘Nothing to exonerate him’

German prosecutor Hans Christian Wolters, who is leading the Madeleine investigation with Portuguese and British detectives, told Sky News: “I assume if he has anything that exonerates him that sooner or later he will share it with us and we would then check it out. What happens then, let’s see.”

“So far he has told us nothing, he’s given us no alibi. So, we can only work on the evidence we have found so far in our investigation. And there was nothing to exonerate him.”

But German prosecutors had never, until two weeks ago, formally interviewed Christian B, a convicted sex offender, even though he has been their chief suspect for more than four years.

They questioned him on 21 April on behalf of the Portuguese authorities who had just made him an arguido, a formal suspect, for their own purposes to avoid a statute of limitations on serious crimes under Portuguese law.

But as an arguido Christian B had the right to silence and refused to answer questions about his whereabouts on the night Madeleine vanished.

His former lawyer Serafim Vieira, who represented him over the theft of fuel in Portugal in 2006 said the suspect’s alleged alibi should not be simply dismissed.

He said: “If he really does have that alibi he should work on that. What I know about him, he was a straight person so if he says he has an alibi that is possible.”

Madeleine’s parents were dining with friends nearby on the holiday complex and had left her sleeping with her younger twin siblings. They and their friends were taking turns to check on the sleeping children regularly.

The McCanns were once suspects for their daughter’s disappearance, but were later cleared of all suspicion. 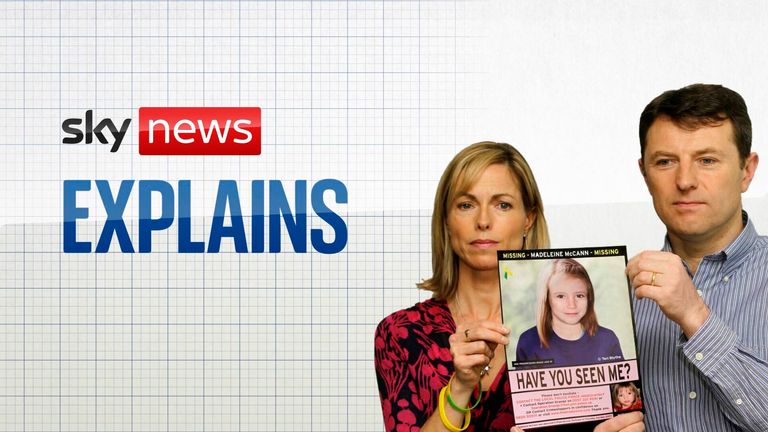 8:44 The hunt for Madeleine McCann

Portuguese police and the UK’s Scotland Yard detectives have investigated, but the German authorities took the lead in 2017 when a friend of the suspect told them Christian B had allegedly claimed to know what had happened to Madeleine.

Mr Wolters said: “We actually haven’t found a single piece of the puzzle in the two years that would have somehow helped to exonerate Christian B. So it’s really nothing that would somehow maybe be an alibi or something. Nothing of that has come to light, really at any point.

“What we found out, it all went in the other direction, so was rather incriminating, without me being able to elaborate on that now.

He added: “However, it is not foreseeable when we will come to an end. So I can’t say that we will definitely conclude the investigations this year. That really also depends on how this develops.”

Mr Wolters has said in the past he believed Madeleine was dead, but would not reveal what evidence he had.

He is also investigating Christian B over three other sex assault allegations, including the rape of a young Irish woman Hazel Behan who was working as a holiday rep on the Algarve in 2004. She has spoken publicly about being raped in her apartment at Praia da Rocha and waived her right to anonymity.

Detective Chief Inspector Mark Cranwell of the Metropolitan Police, who leads the UK investigation, said: “Fifteen years on from Madeleine’s disappearance in Praia Da Luz our thoughts, as always, are with her family.

“Officers continue to investigate the case and our dedicated team are still working closely with law enforcement colleagues from the Portuguese Policia Judiciária as well as the German Bundeskriminalamt.

“At this time, the case remains a missing person’s enquiry and all involved are committed to doing what we can to find answers.”

End-of-life care: Less than half of people who died at home during pandemic received good professional care, survey finds