Amber Heard was physically and sexually abused by Johnny Depp and suffered PTSD as a result, jurors have been told by an expert psychologist – the first defence witness to take the stand as the actress begins to hit back with her side of the story.

Dr Dawn Hughes’ testimony began after a bit of drama in the courtoom in Fairfax, Virginia, as Heard’s team argued for the trial to be dismissed entirely – just moments after Depp’s lawyers rested their case.

But Judge Penney Azcarate moved forward with the hearing, calling Dr Hughes to the stand as the actress’s first witness on Tuesday. 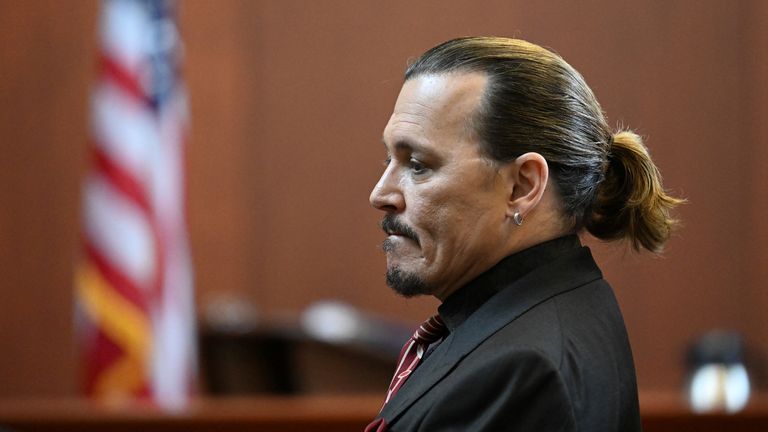 After testimony earlier in the day from a financial expert – who estimated Depp had suffered lost earnings of about $40m – things took a darker turn as Dr Hughes told the court of Heard’s reports of physical and sexual abuse.

This became quite graphic at times and Heard looked visibly upset as the psychologst went through the details.

Here are some of the key moments from the 13th day of testimony. Warning – this article contains graphic descriptions of sexual abuse which some may find disturbing

• After Depp’s final witness finished his testimony, Heard’s team filed for the case to be dismissed – but the judge continued with the hearing
• ‘She’s the abuser,’ Depp’s lawyer Ben Chew told the court, about Heard, as he argued for the case to continue
• Forensic accountant Michael Spindler said he believed Depp ‘suffered lost earnings of approximately $40m’
• Expert psychologist Dawn Hughes said Heard has post-traumatic stress disorder (PTSD) caused by Depp’s abuse
• Dr Hughes detailed graphic claims of sexual abuse reported to her by Heard, including an incident during the infamous Australia trip
• Catch up on what has been said so far in our live reporting of the trial as it happens 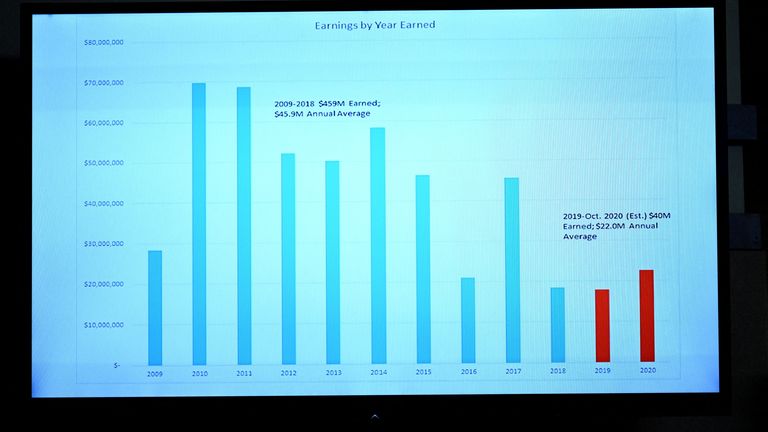 Image: Johnny Depp’s earnings by year were shown to the court

Depp is suing his ex-wife for libel over a first-person column she wrote about domestic abuse in the Washington Post in December 2018 – even though it didn’t mention his name.

Tuesday’s hearing started with the remainder of a recorded testimony given by private nurse Erin Falati, who went through treatment notes she made during her time working with Heard, before moving on to forensic accountant Michael Spindler. 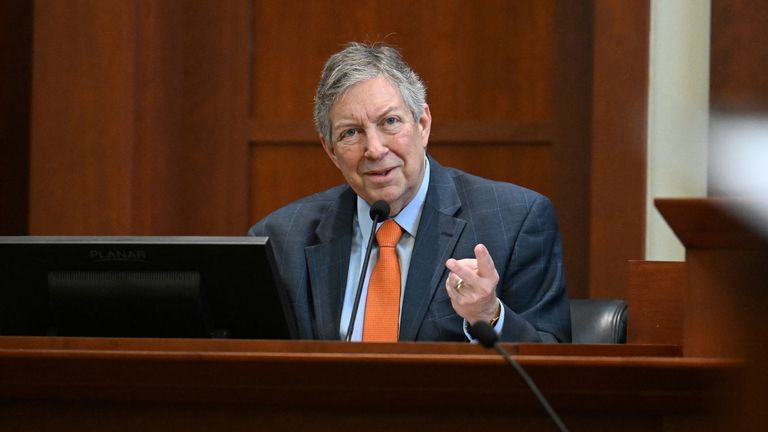 Taking the stand, Mr Spindler told the court he had been tasked with looking into Depp’s estimated lost earnings as a result of Heard’s allegations – analysing the period following the publication of the column up to 31 October 2020.

Based on previous testimony of an apparent $22.5m deal struck for a sixth Pirates Of The Caribbean film, plus workings based on Depp’s earnings for other projects in 2017, Mr Spindler told the court he estimated the actor had missed out on about $40m.

After 13 days of testimony from witnesses for Depp’s team – including the actor himself – Mr Spindler’s evidence closed their case. 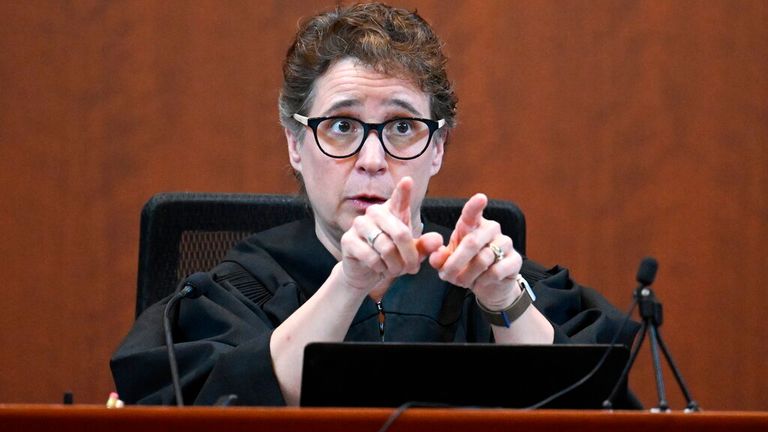 Image: Judge Penney Azcarate is presiding over the trial

With the close of the plaintiff’s case, it was time for the defendant’s to begin. However, at one point it seemed there was a chance this might not happen, as Heard’s lawyer Ben Rottenborn filed a motion to dismiss the trial.

He argued that Depp had failed to make his case as a matter of law and that no reasonable jury could find in his favour.

“She’s the abuser,” Depp’s lawyer Ben Chew said as he spoke out against the motion in a heated speech.

Judge Azcarate told the lawyers that the standard for dismissing a case at this point in the trial is exceedingly high, and it should be allowed to move forward if Depp has provided even a “scintilla” of evidence backing up his claims.

She dismissed the motion to strike the case on two counts and said she would take advice on a third, but allowed the case to continue. 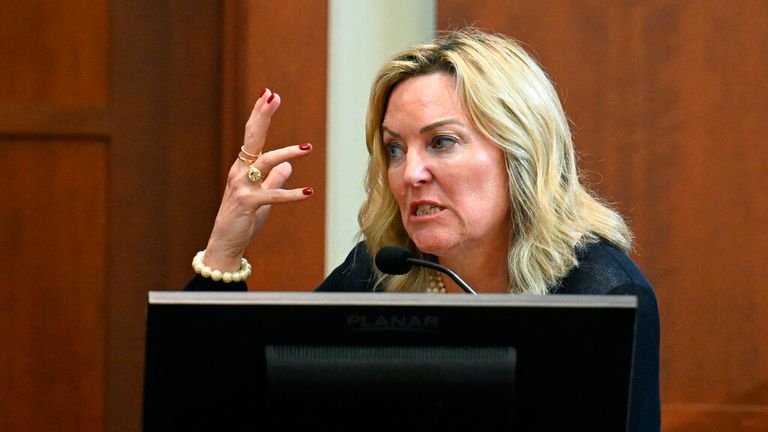 Dr Dawn Hughes was the first witness for Heard’s team and she appeared in person to give her testimony in court.

She told jurors she spent a total of 29 hours evaluating Heard, and concluded that the actress suffered post-traumatic stress disorder (PTSD) caused by violence suffered at the hands of Depp, including multiple acts of sexual assault.

Her testimony contradicted that of a psychologist hired by Depp’s lawyers, who previously told the court that Heard had “grossly exaggerated” symptoms of PTSD and actually suffered from “histrionic and borderline personality disorders”.

Detailing allegations of sexual violence made to her by Heard against Depp, Dr Hughes told the court the actress had described several instances of sexual abuse – including one during their now infamous fight in Australia in 2015, during which the actress claimed her then husband penetrated her with a bottle.

The actress reported “going outside of her body and the only thing she was thinking is, ‘oh God, I hope it’s not the broken one’,” Dr Hughes told the court. The trial has previously been told how bottles were broken during a fight between the pair in Australia – which also led to Depp severing his finger.

Heard could be seen blinking back tears, appearing visibly upset as the psychologist detailed the sexual abuse allegations.

Dr Hughes told jurors that many of the instances of abuse had been corroborated, including through apologies and admissions made by Depp to Heard and admissions he made to friends in text messages.

‘I got eyes down there’ Depp strenuously denies physically attacking Heard and claims she was the aggressor in their relationship.

Dr Hughes, in her testimony, said the actress had acknowledged that she did at times push and shove Depp, call him names and insult his parenting. But there was a difference, she said – Depp’s violence was intimidating and threatened Heard’s safety.

Much of the violence, the psychologist claimed, stemmed from Depp’s “obsessive jealousy”. He insisted she avoid nude scenes, criticised her ambition and accused the actress of having affairs with co-stars such as Billy Bob Thornton and James Franco. He would also call her co-stars or directors and tell them he “had eyes” on set, the court was told.

Cross-examination of Dr Hughes will take place from Depp’s team on Wednesday – with Heard herself expected to follow on the stand. 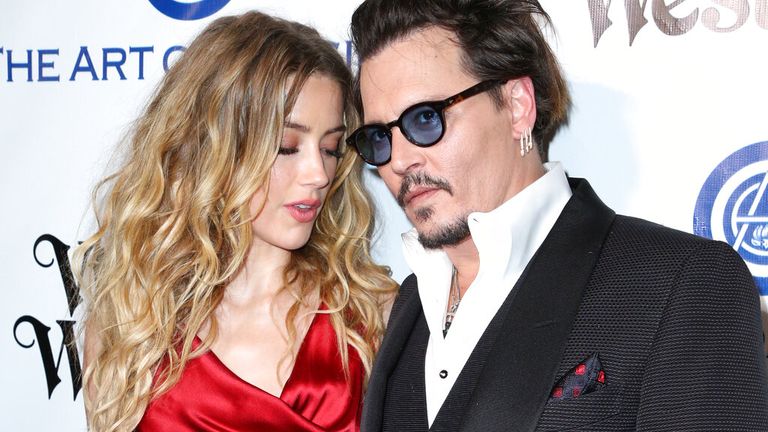 Image: Heard and Depp pictured in January 2016, just a few months before their break-up. Pic: AP

The former couple started dating after meeting on the set of the 2011 film The Rum Diary and married in Los Angeles in February 2015. They split up in May 2016, with Heard filing for a restraining order.

Depp is now suing Heard for $50m (£38.2m) in Fairfax County Circuit Court, Virginia, over the 2018 first-person article in which she refers to herself as “a public figure representing domestic abuse”.

Heard’s column does not mention Depp by name, but he argues it is an example of “defamation by implication” because parts of the piece clearly refer to allegations of abuse she made in 2016. Heard has issued a counterclaim for $100m (£76.4m).

The trial is now in its fourth week and is scheduled to last six weeks in total, with a week’s break next week.

In the opening statements, the actor’s lawyers said his ex was preparing for “the performance of a lifetime” during the trial, while her legal team said the case would expose the “real” person behind the “fame” and “pirate costumes”.

Callum Halpin: One of UK’s most wanted fugitives arrested in Portugal in connection with Manchester murder