A man has been charged with assault with a deadly weapon after US comedian Dave Chappelle was attacked on stage during a stand-up show.

Chappelle was uninjured after being knocked to the floor just as the Hollywood Bowl show was ending.

Twenty-three-year-old Isaiah Lee has now been charged and is being held on $30,000 bail, said Los Angeles Police Department.

Police earlier told NBC that the suspect had been armed with a replica gun that could eject a knife blade.

She tweeted that security had “rushed and started punching and kicking the s*** out of Chappelle’s attacker”.

Hollywood star Jamie Foxx was among those who tried to help.

Video later showed the attacker with what appeared to be a badly dislocated arm as he was put in an ambulance.

Another journalist said the man had “lunged” at Chappelle and sent him “flying in the air”.

“He fell backwards onto his back, with his arms and legs up in the air. He was obviously in shock. We were all in shock…” said Sharon Carpenter. 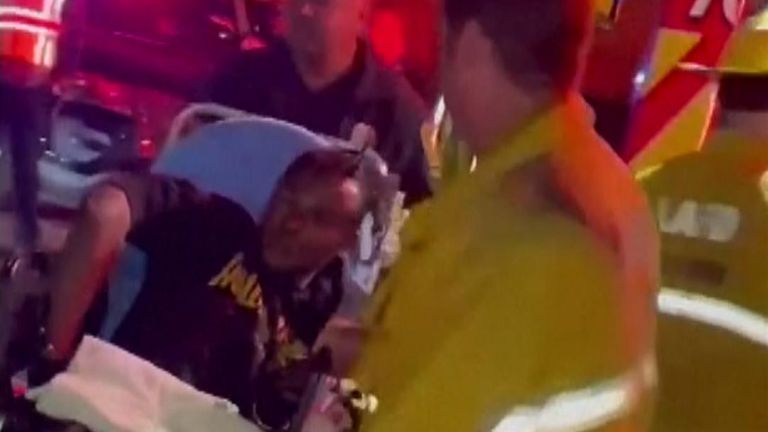 In a social media clip just after the incident, Chappelle joked about the attacker: “It was a trans man.”

A spokesperson for the comedian described the attack as “unfortunate and unsettling” but said Chapelle “refuses” to let it “overshadow the magic of this historic moment”.

The four performances at the Hollywood Bowl set record-breaking sales for the 48-year-old and tied him with Monty Python for the most headlined shows by any comedian at the venue.

The comedian has been criticised by some for his jokes about the trans community and there was a backlash last year against his Netflix special.

Fellow comedian Chris Rock, who was slapped by Will Smith at the Oscars, also performed at the show.

“After Chappelle got attacked, he came on stage and they joked that it was Will Smith,” tweeted Brianna Sacks.

Chappelle also spoke about needing more security after his recent controversy, as well as the Chris Rock incident, according to audience members.

UK comedian Jimmy Carr was at the Hollywood show and posted a picture of himself with Chappelle.

The incident happened at the last of Chappelle’s four performances at the venue, part of the Netflix Is A Joke comedy festival.

The 48-year-old later returned to the stage to thank Foxx for intervening.

“Whenever you’re in trouble Jamie Foxx will show up in a sheriff’s hat,” he joked.

“This man is an absolute genius – we got to make sure we protect him at all times man – this is what it’s about…” Foxx replied.

A Hollywood Bowl spokesperson said “an active investigation” was under way.

Chappelle last year hit out at cancel culture after the backlash to his Netflix show, in which he said “gender is a fact” and declared himself part of “team TERF”. Image: Chappelle is one of America’s most popular stand-ups. Pic: Netflix/Mathieu Bitton

However, he also said he was willing to discuss his show with members of the transgender community.

The controversy saw some Netflix staff walk out in protest but the streaming giant stood by Chappelle and refused to take down the programme.