A British man who joined a controversial Ukrainian military unit says he is willing to spend the next year defending against Russia’s invasion – and he has not been deterred by the capture of other Britons.

Mark Ayres has spent the past two months in Ukraine after joining the Azov Regiment, which has far-right origins – insisting he has challenged some members over their beliefs, and those he has met are not “monsters and psychos”.

The 47-year-old British Army veteran, who has a teenage son in the UK, first spoke to Sky News when he arrived in Ukraine in early March, despite having no links to the country.

Since then, Mr Ayres says he has helped the Azov Regiment defend the city of Bucha, where Russia is accused of committing war crimes with mass killings and the torture, rape and murder of civilians.

He has now been told he must wait in Kyiv to sign a contract with the Ukrainian army before taking part in any further military action, after several Britons were captured by Vladimir Putin’s troops.

Mr Ayres – who previously travelled to Syria to join the battle against Islamic State – says he has “no problem” with spending the next 18 months in Ukraine “until the fighting stops”.

“I’ve got no problem with a year or year-and-a-half (in Ukraine). 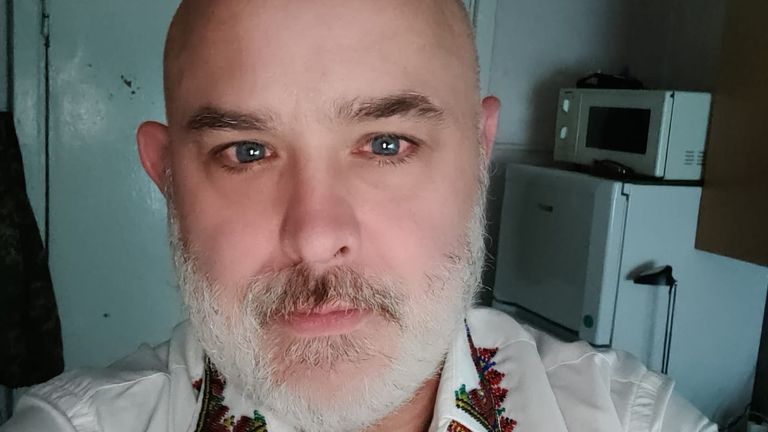 Image: Mr Ayres is staying in Kyiv while he waits to sign a contract with the Ukrainian army

‘They’re not monsters and psychos’

Mr Ayres says he had reservations about joining the Azov Regiment, which originated as a far-right paramilitary unit and is now part of Ukraine’s National Guard.

The regiment’s background has been used by the Kremlin to justify its claim that Ukraine needed “de-Nazifying”.

However Ed Arnold, research fellow on European security at the defence think tank RUSI, told Sky News that the Azov military group had “made steps to move away from its far-right links”.

And in March, Ukrainian President Volodymyr Zelenskyy, who is Jewish, awarded the title of Hero of Ukraine to an Azov commander.

1:59 Sky News first spoke to Mark Ayres in March when he arrived in Ukraine

Mr Ayres told Sky News: “By accident I joined the Azov unit. That would have been my last choice of a unit to go to but I’m pretty glad I did.

“They’re not the monsters and psychos that I would envisage neo-Nazis to be – I mean they’re not all like that.

“A lot of them are decent guys, just with stupid views.

“It’s just like they’re playing at it. They’re caught up in wanting to belong to something that catches them in. It’s so stupid.”

Mr Ayres said one member of his company was a “Jewish Ukrainian”.

“They’re probably are some psychos in the battalion but I haven’t come across any yet,” he added. 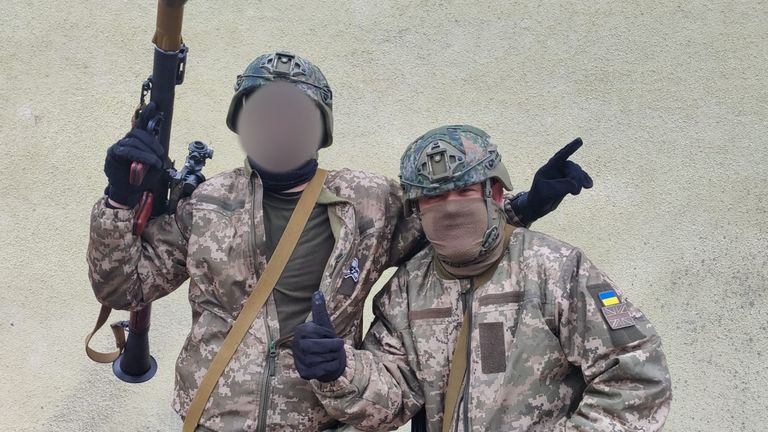 Image: Mr Ayres says he was reluctant to join the Azov regiment but is now ‘glad’ he did

Mr Ayres said he is aware there is “a possibility” he may be captured by Russian troops, but he believes being British means he is more likely to be kept alive because he would be “quite valuable”.

He added: “I’d probably get roughed up and questioned and stuff like that but I don’t think I’d be tortured pretty bad… or killed.”

Mr Ayres said he personally knows Aiden Aslin – one of two British fighters captured by Russian forces in Ukraine – as they both were in Syria at the same time. 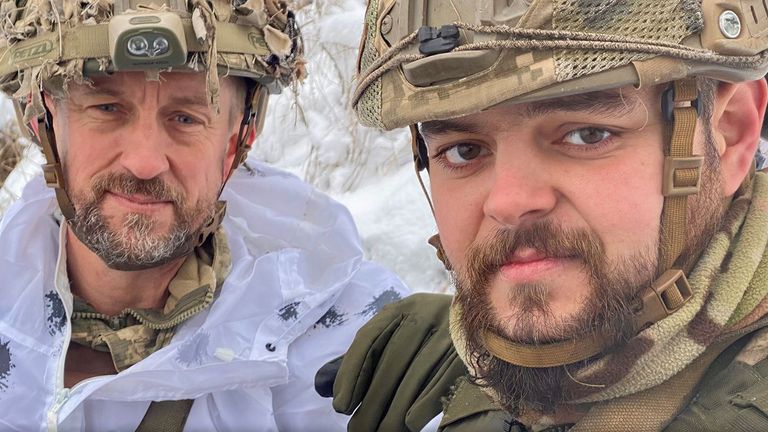 Image: Shaun Pinner (L) and Aiden Aslin (R) before they were captured by Russian forces

Two UK aid workers have also been captured, while army veteran Scott Sibley was the first known British national to die in the Ukraine war.

Mr Ayres, who previously served with the Royal Green Jackets before being discharged after a robbery conviction, said joining the military action in Ukraine was “like being a soldier again”.

“I’ve been on two operations (in Ukraine),” he said.

“With Bucha, we were on the right flank across the river holding positions while our left flank attacked and pushed them out of Bucha.

“I haven’t really seen any fighting, it’s just been artillery. Just getting smashed by artillery.”

He added: “When you’re getting really shelled, you could die any second – it only takes for a shell to land on you.

“I wouldn’t say I was in fear. You’re aware of what can happen.”

Read more:
Briton who travelled to Ukraine to join military fight leaves over ‘suicide mission’ fears
British man who volunteered to fight against Russia turned down as he’d be ‘a liability’ 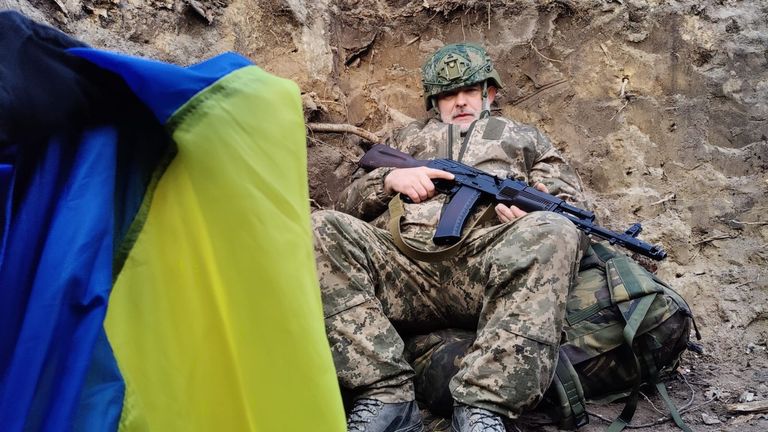 ‘One geezer fired an anti-tank missile in his room’

Mr Ayres, who is from London but lives in Bedford, said he believed his unit no longer wanted to take Western volunteers with a lack of military experience.

“I think there was one geezer who fired an anti-tank missile in his room and f****d himself up.

“Just problems. They always cause problems.”

The Foreign Office has warned that Britons travelling to Ukraine to fight could be prosecuted on their return to the UK.

However Mr Ayres said those seeking prosecutions “wouldn’t have a leg to stand on” after the remarks of Foreign Secretary Liz Truss who backed Britons wanting to go to Ukraine to fight. 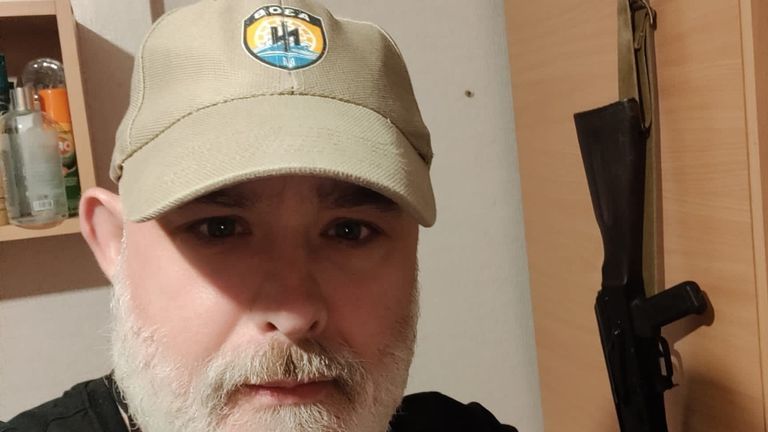 Image: Mr Ayres pictured wearing a hat with the symbol of the Azov unit

He said he had previously been arrested after returning from Syria on three occasions but faced no further action.

“I’m still just focused on what’s going on here but I don’t think they’ll be any repercussions,” Mr Ayres added.

Mr Ayres said he is now staying in an apartment block in Kyiv while his unit has moved to the east of Ukraine to face Russian troops.

“At the moment, it’s just like pre-war. Everybody’s coming back to Kyiv now. Everything’s running.

He added that he manages to speak to his 16-year-old son once every two or three weeks.

Asked how his son feels about his father joining the military fight in Ukraine, he replied: “He doesn’t really say.

“I only get one word answers out of him… he’s at that age.”