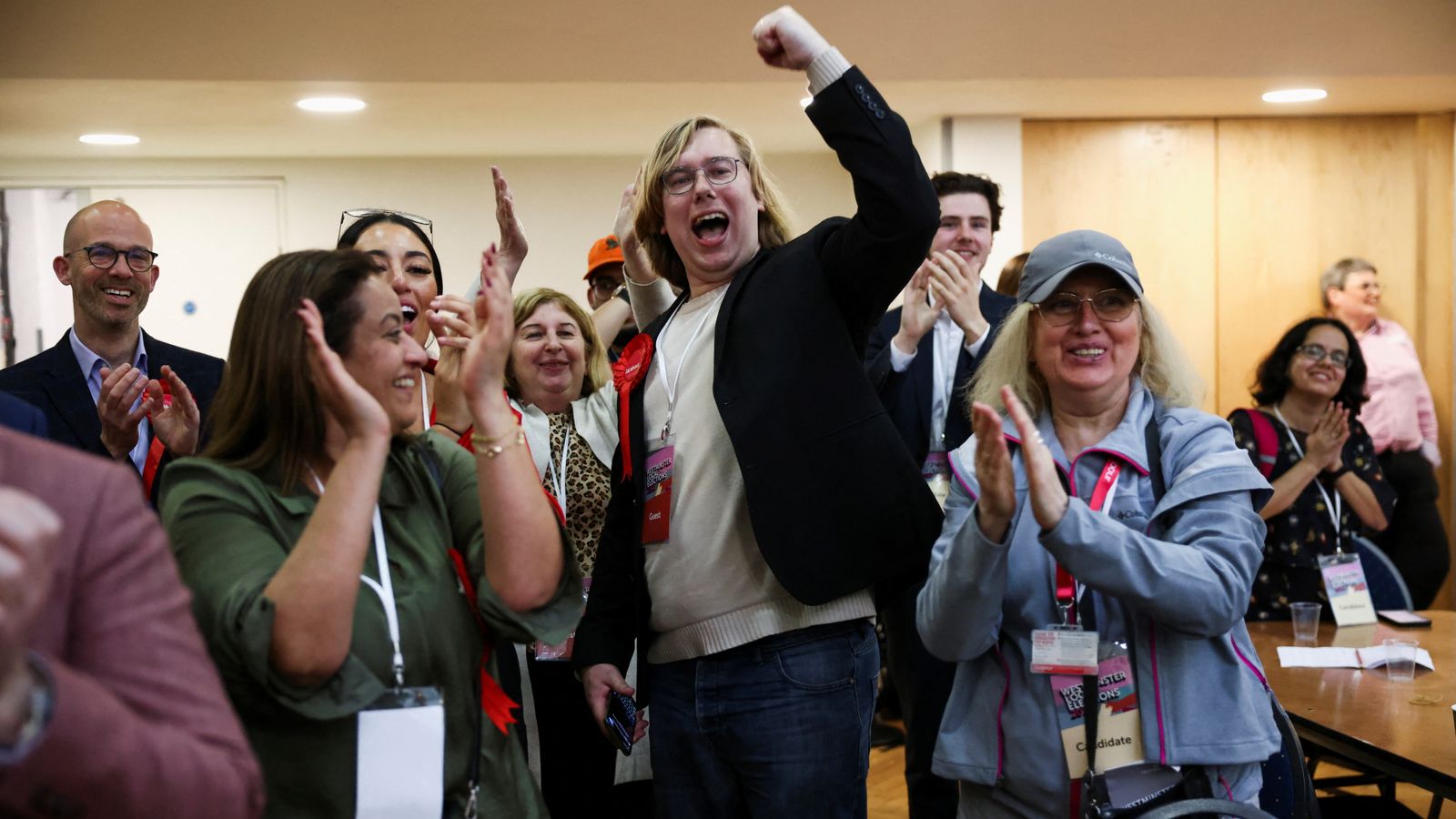 The Conservatives have lost control of three flagship London boroughs as Labour further strengthened its grip on the capital.

Despite the significant wins in Wandsworth, Margaret Thatcher’s “favourite council”, Westminster and Barnet, gains by Sir Keir Starmer’s party have been more modest elsewhere in England.

Local Conservative leaders have blamed the prime minister as partygate and the cost of living dominated comments at the doorstep.

But Boris Johnson’s allies warned it was not time to change the leader as they insisted Labour gains fell short of what was needed for the party to secure a general election victory. 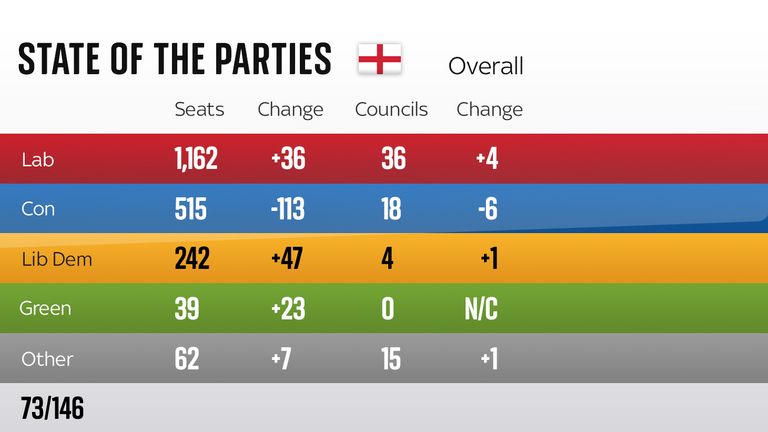 Check the result where you live

Outside London, Labour was triumphant in the new Cumberland unitary council, which covers Tory-held seats, and took the bellwether council of Southampton from the Tories.

But in high profile places where Labour needed to make advances – such as Hartlepool, Peterborough, Redditch and Ipswich – the party failed to take those councils.

While the Conservatives have seen a substantial drop in support in the south of England, Labour has seen a larger drop in the north.

A rise in Lib Dem support across England has seen the party winning Hull from Labour, gaining from the Tories in Merton and in West Oxfordshire where David Cameron’s constituency was.

Sir Keir Starmer, speaking from Barnet on Friday morning, remained defiant as he said the results represented a “massive turning point for the Labour Party”.

Labour sources described the victory in Wandsworth, known for its low taxes, as “monumental”.

“This was the Tories’ jewel in the crown,” one party source said. “Voters in Wandsworth have put their trust in the change Keir Starmer’s Labour represents.”

Lib Dem leader Sir Ed Davey was grinning about his party’s gains as he spoke to Sky News’ Kay Burley, telling her people had used their votes to send a message to Mr Johnson.

He insisted Lib Dem gains were not protest votes against the government but “a real trend now” – partly because the Tories are “failing so badly”.

However, Conservative Party co-chair Oliver Dowden brushed off Tory losses as he told Sky News the results were “more consistent with what you would expect in midterm in urban areas” – but admitted he was “disappointed” with the key losses in London.

“Labour is certainly not on the path to power and I believe Boris Johnson has the leadership skills, particularly the energy and dynamism to lead us into the next election,” he added.

PM under pressure in London

The Tories had run Westminster since its creation in 1964 and Wandsworth since it turned blue in 1978, shortly before Mrs Thatcher’s election as prime minister.

Victory in Barnet will also be seen as a significant accomplishment for Sir Keir and a potential sign of growing trust in the party’s leadership.

The north London authority has one of the UK’s biggest Jewish populations, and as Labour was dogged by accusations of antisemitism under former leader Jeremy Corbyn, people in the area voting for the party decreased.

Read more:
From the red wall to Brexit: The story of the local elections 2022 so far in charts

A local Tory leader said the Labour victory in Barnet “does not bode well” for the Conservatives for a general election.

Daniel Thomas said: “I think this is a warning shot from Conservative supporters… but also a fair number of Conservative voters who just didn’t go out to vote, stayed at home.”

Labour have won some big symbolic victories so far, but questions remain in areas the party needs to make progress

This is not an easy election to analyse: the picture is mixed and messy. As dawn breaks on Friday, nobody – perhaps with the exception of the Lib Dems – should be overly happy with the results.

Tories suffered losses – perhaps not as many as they might. Two losing council leaders, one in the North West, one in London, put some of the blame at the door of Boris Johnson.

Labour is continuing to improve in London, taking Wandsworth, Barnet and Westminster. There were bright spots for Labour at either end of the country – the new Cumberland unitary council – a symbolic reclaiming of “Workington man”, which covers seats held by Tories, and Labour-Tory bellwether of Southampton.

Labour will be pleased to have gained Southampton from the Tories, overturning the small majority Mr Johnson’s party had there from the last set of local elections.

But the Liberal Democrats took Kingston-upon-Hull in what will be seen as a big defeat for Labour.

Many of the so-called red wall councils are yet to declare. 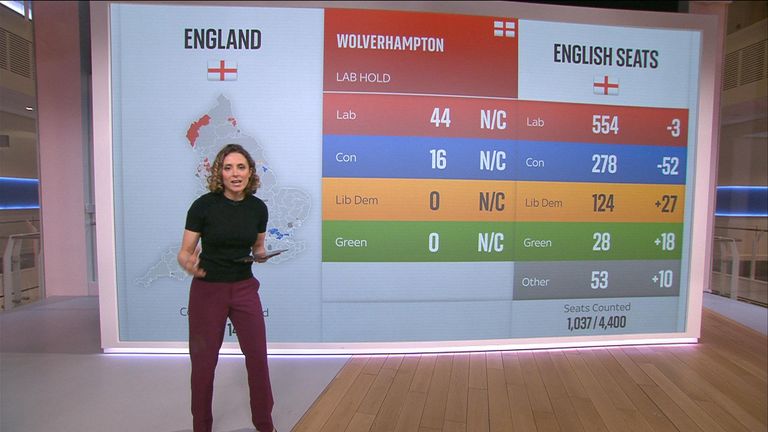 While the Conservatives held Basildon, elsewhere in Essex, the Tory leader of Colchester Council lost his seat to the Liberal Democrats.

Mr Johnson’s party also failed to take control of Peterborough, where the Conservatives needed to gain two seats, with the party now running the council under minority control.

John Mallinson, the Tory leader of Carlisle City Council, said the prime minister should be moved on after his party suffered a mass defeat in one local election. 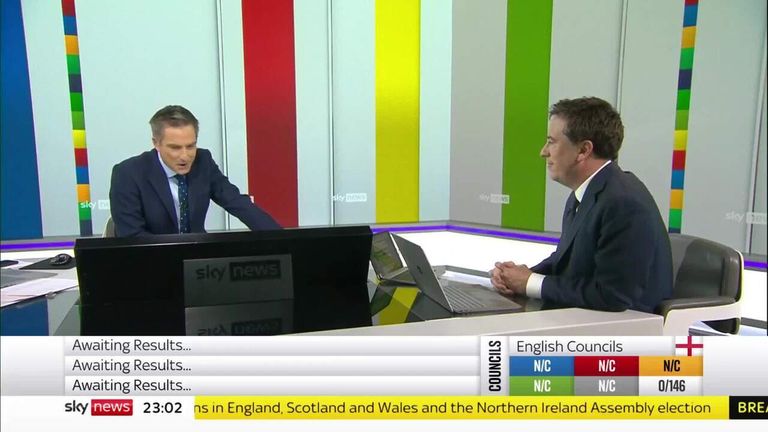 2:50 Why do these elections matter so much?

In England, there are more than 4,000 seats up for grabs, while Scotland and Wales each have more than 1,000 seats at stake.

The elections decide who will be responsible for handling local issues such as planning, housing and rubbish collections – but wider national issues such as the surge in the cost of living have also come to the fore.

Results, which started arriving in the early hours of Friday, could also prove key to the future of the prime minister – and whether rumblings of backbench discontent escalate into a chorus of opposition triggering a no-confidence vote.

They will also shed light on whether Sir Keir has been able to make ground amid the pressures facing the PM as a result of partygate, the cost of living crisis and questions about the culture in Westminster. 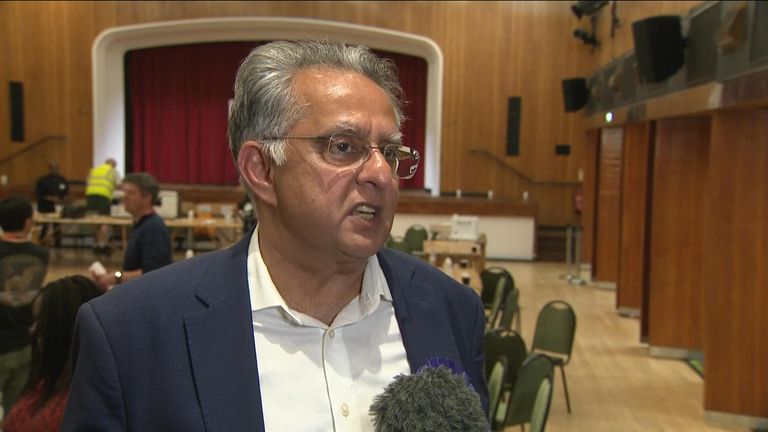 In Northern Ireland, 90 assembly members are being elected – with tensions high as polls point to Sinn Fein overtaking the DUP as the largest party, suggesting Northern Ireland could have a nationalist first minister for the first time.

Voters in Bristol chose to scrap the directly elected mayor system in the city in a referendum.

In Scotland and Wales, counting did not start until Friday morning, with the earliest results not expected until the afternoon.

From the red wall to Brexit: The story of the local elections 2022 so far in charts

Local elections: Labour have chalked up some big symbolic wins but questions remain for Keir Starmer