Cancer campaigner Deborah James has said she’s had the “most surreal, mind-blowing, humbling five days” of her life after being made a dame and her fundraiser reaching more than £5.7m.

The podcast host, who is receiving hospice-at-home care to manage her terminal bowel cancer, thanked the public for their “generosity” and the Duke of Cambridge for “going above and beyond”.

Writing in an Instagram post, the 40-year-old, who is known as Bowel Babe, said: “I believe I may have had the most surreal, mind-blowing, humbling five days of my life.

“I cannot thank you for your generosity at launching the Bowel Babe fund which now stands at £5.7 million, and to the Duke and Duchess of Cambridge for going above and beyond to make a very special memory happen yesterday.”

However, the mother-of-two continued to say she is “getting weaker and more tired” and is running on “pure adrenaline”.

“My family are being amazing and as emotional as it all is, we are finding so much to smile about in the sadness,” she said.

“I always said I wanted to slide in sideways when my time is up, with a massive smile, no regrets and a big glass of champagne! Still my intention!”

Her Just Giving page said it is “raising money to fund clinical trials and research into personalised medicine for cancer patients and supporting campaigns to raise awareness of bowel cancer”. 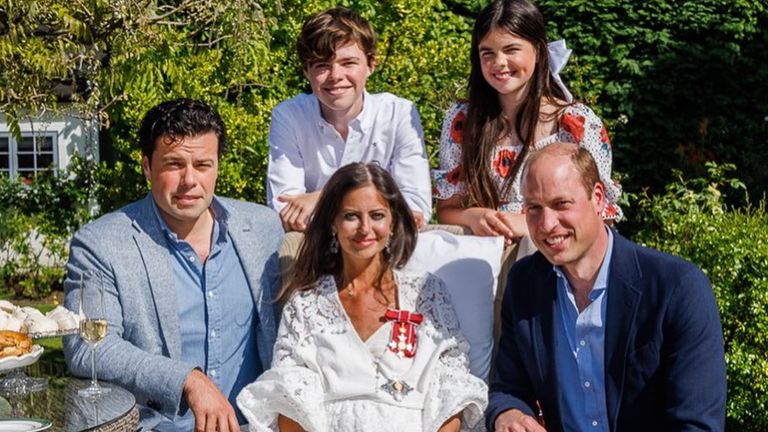 The Duke and Duchess of Cambridge expressed their support for Ms James before she was awarded her damehood and said they had donated to her fund.

The presenter of the popular BBC podcast, You, Me and The Big C, announced she had moved to hospice-at-home care on Monday.

In a heartbreaking post, she wrote: “The message I never wanted to write. We have tried everything, but my body simply isn’t playing ball

“I know we have left no stone unturned. But even with all the innovative cancer drugs in the world or some magic new breakthrough, my body just can’t continue anymore.”

The former headteacher was diagnosed with bowel cancer in 2016.

Since then, she has been sharing updates about her progress in candid social media posts, acquiring more than 680,000 followers on Instagram.