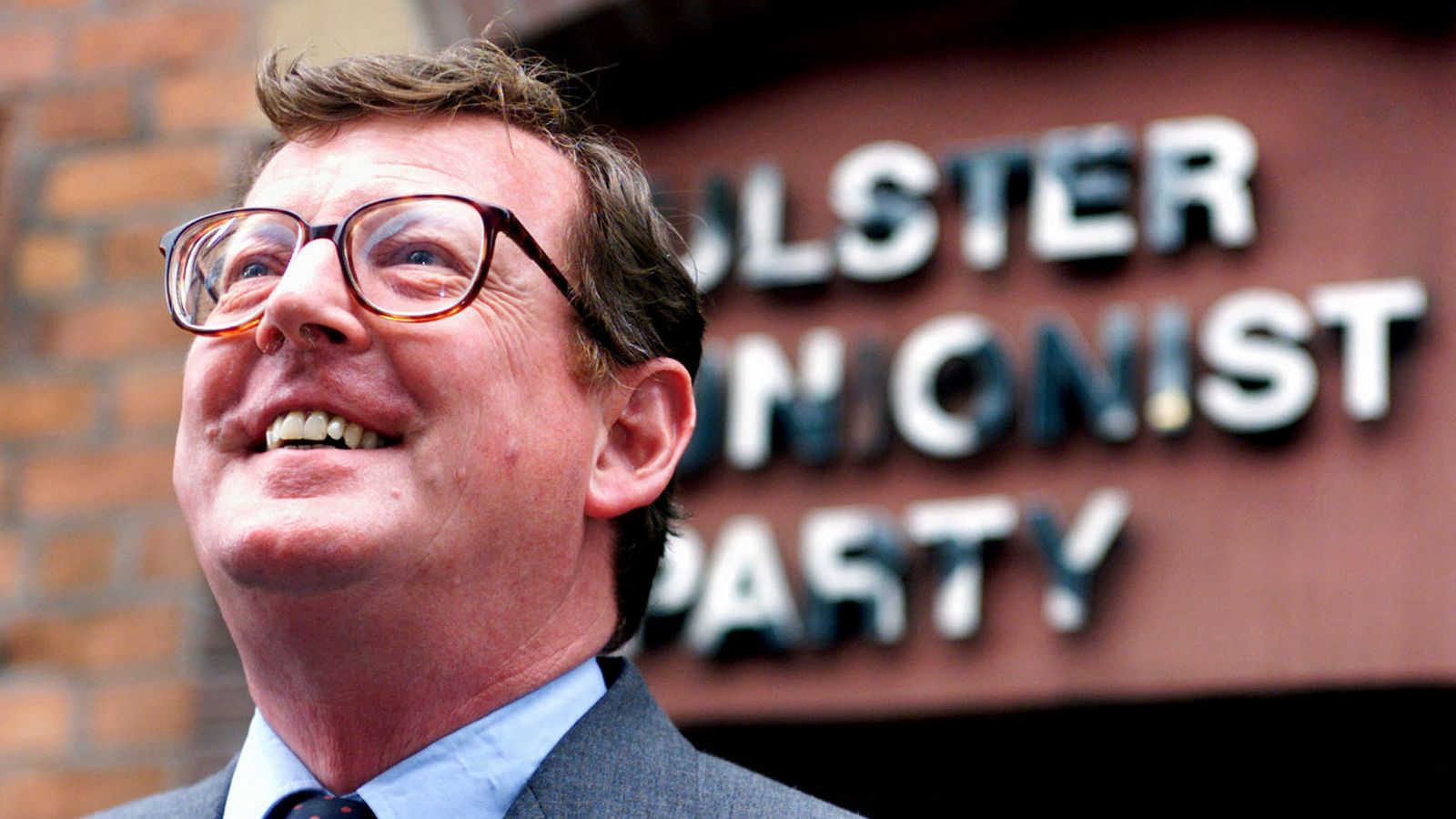 Lord Trimble, the original first minister of Northern Ireland and co-architect of the Good Friday Agreement, has died, aged 77.

“It is with great sadness that the family of Lord Trimble announce that he passed away peacefully earlier today following a short illness,” a statement read.

A planned recall of the Stormont Assembly will not proceed on Tuesday following his the death.

Outgoing speaker Alex Maskey said party whips were in agreement that continuing with the sitting would be “inappropriate”.

Lord Trimble’s tough stance on disputed Orange Order parades in the 1990s won him the leadership of the Ulster Unionist Party.

But he was the unionist who dared to compromise and led his party to the negotiating table at Stormont.

Bertie Ahern, former Taoiseach (Irish prime minister), said: “I think history will remember him as a politician who, in a really difficult time, when we were trying to end 30 years of violence, in spite of everything, stood up and put his name to that agreement.

Their contribution to the peace process earned David Trimble and his nationalist counterpart John Hume the 1998 Nobel Prize for Peace.

He was the first person to be elected first minister of Northern Ireland, holding the office from 1998 to 2002.

But the rise of Sinn Fein before the IRA had decommissioned weapons forced him to take another leap of faith. 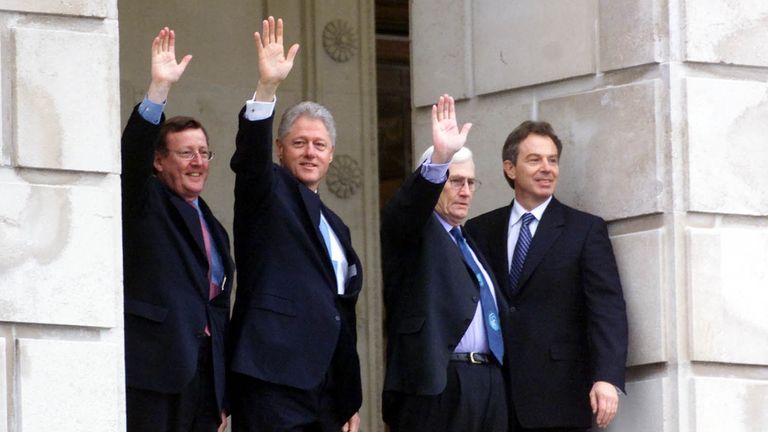 David Kerr was David Trimble’s press secretary during those tumultuous days in Stormont politics and knew him better than most.

He said: “I do believe history will be kind to David Trimble.

“I think when historians look back objectively with a longer perspective over the timeframe of things that happened before and after the Good Friday Agreement, I think they will understand the pivotal role that he played in transforming politics here.”

He incurred the wrath of anti-agreement Unionists, eventually losing his Upper Bann seat at Westminster to the Democratic Unionist Party.

Elevated to the Lords, David Trimble never expressed regret for compromising, describing the Good Friday Agreement as his greatest achievement.

In a recent interview for Sky News, he said: “That was the first time we had an agreement within the political parties of Northern Ireland which was accepted by all of them.

“It gave a situation where we could proceed in a context where you could have disagreements.”

Lord Trimble is survived by his wife Daphne and sons and daughters, Richard, Victoria, Nicholas, and Sarah.

A lawyer, academic and statesman, David Trimble will be remembered for his ability to see what others couldn’t, the potential for lasting peace. 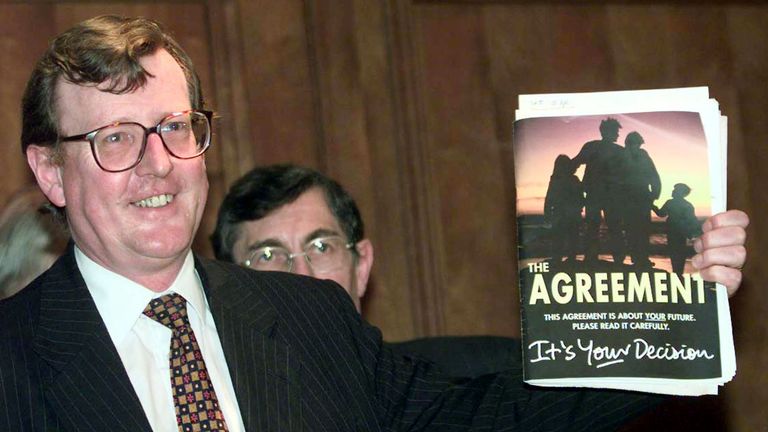 ‘One of the few real heroes of our age’

MPs from across the political spectrum have paid tribute to his legacy.

He said: “David Trimble was a man of courage and vision. He chose to grasp the opportunity for peace when it presented itself and sought to end the decades of violence that blighted his beloved Northern Ireland.

“He will forever be associated with the leadership he demonstrated in the negotiations that led up to the 1998 Belfast Agreement.

“The bravery and courage he demonstrated whilst battling his recent illness was typical of the qualities he showed in his political career, at Stormont and at Westminster.”

Prime Minister Boris Johnson said: “I am deeply saddened to learn of the death of Lord Trimble earlier today. He was a giant of British and international politics and will be long remembered for his intellect, personal bravery and fierce determination to change politics for the better.”

The Secretary of State for Northern Ireland Shailesh Vara said the loss of Mr Trimble “will be felt deeply throughout Northern Ireland”, adding: “He will be remembered for his unshaking defence of peace, and his leadership in helping deliver the Belfast (Good Friday) Agreement.”

Conservative MP David Davis said Mr Trimble was “one of the few real heroes of our age” while Liam Fox MP said his legacy will “benefit many generations to come”.

Meanwhile, Sinn Fein’s Michelle O’Neill tweeted: “His very significant contribution to the peace process and his courage in helping achieve the Good Friday Agreement leaves a legacy a quarter century on for which he and his family should be rightly proud.”

And Labour leader Sir Keir Starmer tweeted: “David Trimble was a towering figure of Northern Ireland and British politics as one of the key authors of the Good Friday Agreement, the first first minister and winner of the Nobel Peace Prize.

“My thoughts are with Lady Trimble and their family.”

He said Lord Trimble’s “contribution to Northern Ireland and to the United Kingdom was immense, unforgettable and frankly irreplaceable”.

“David Trimble, in his support of the peace process, showed politics at its very best,” he said.

“We have lost today someone who will be mourned by friends and foes alike.”

“David faced huge challenges when he led the Ulster Unionist Party in the Good Friday Agreement negotiations and persuaded his party to sign on for it. It is to his credit that he supported that Agreement. I thank him for that,” he said. 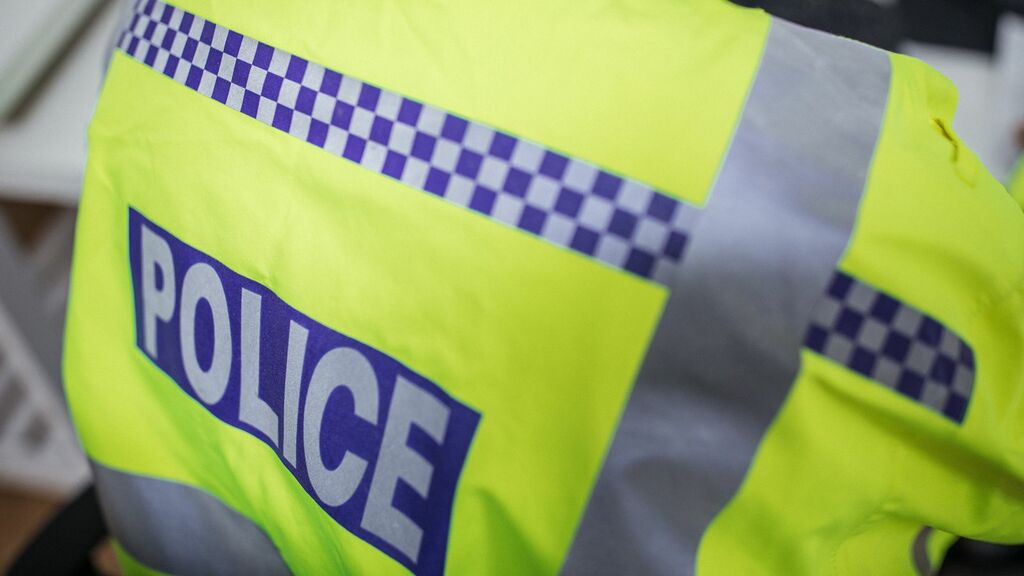