England cyclist Matt Walls crashed into the crowd during the final lap of the men’s 15km scratch race, leaving one young fan “covered in blood”.

Medical teams rushed onto the track and the race was abandoned as a second cyclist, Matt Bostock from the Isle of Man, was taken away on a stretcher.

One fan had to be helped away in a wheelchair after Walls landed in the crowd, according to The Sun.

The Lee Valley VeloPark in London, one of the venues for Birmingham’s Commonwealth Games, was cleared of fans and all racing stopped. 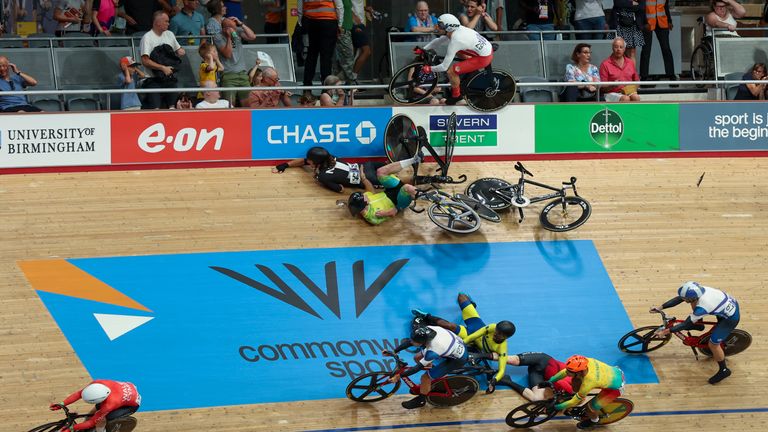 British Cycling tweeted shortly after the crash: “Following a crash in the men’s scratch, Matt Walls & Matt Bostock are being treated by medics before being taken to hospital for further treatment.

“We send our best wishes to the riders and spectators involved in the incident, and will provide a further update when we can.”

Welsh Cycling added: “Sending our love and best wishes to those injured in the crash at the Velodrome today. On behalf of all of us at Welsh Cycling we hope for a speedy recovery.

“We can confirm that Will Roberts is ok, and was not involved in the accident.”

Scottish cyclist Kyle Gordon was also “taken down” but recovered and got back up and onto his bike.

The crash comes after England cyclist Joe Truman was knocked unconscious in a separate collision on Saturday when riding at 45mph, suffering a broken collarbone as he hit the hard flooring.

‘Every barrier in the world went up overnight’: Some bands are skipping the UK because of Brexit