Fans watching the nail-biting final on Sunday at Wembley occasionally saw the team’s head coach kissing a wristband she was wearing at the game.

And it has been revealed the gesture had a deep significance to her.

Just a month before the championship, her sister passed away, and she took time away from the camp to grieve with her family.

When she returned, the team asked if they could wear black mourning bands in their first game, in recognition of her loss.

At the time, she told the Sun: “They are such great people, and it shows how close we are. It was a great gesture, and I’m sure my sister would have been proud.” Following England’s win against eight-time champions Germany on Sunday, one of the first things Wiegman did was kiss a bracelet she was wearing.

She said: “I’m kissing this little armband that was my sister’s. My sister passed away during our prep camps.

“That’s a really big miss, because she’s my mate.

And in a reference to the moment when German midfielder Lina Magull smashed a shot on target, to be denied by the woodwork, Wiegman smiled and added: “But I think she was here, I think she was on the crossbar.” 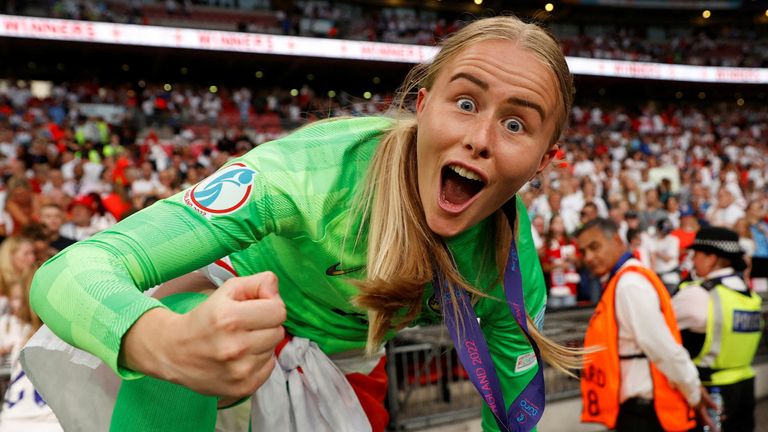 Image: England keeper Hannah Hampton’s goal may have had a little bit of protection from above

Wiegman’s team ended a so-called 56 years of hurt by defeating Germany 2-1 after extra time in front of more than 87,000 fans, a record crowd for any match at a European Championships, becoming the first England manager since Sir Alf Ramsey in 1966 to win a major international tournament.

The Dutchwoman was only appointed as England manager 10 months ago, but has now won successive Euros after leading the Netherlands to glory five years ago.

Under her leadership, England overtook Germany’s (2009) record of 21 goals at a Women’s Euros. Their final winner was their 22nd goal of the tournament.