Celebrations are taking place across the country as football fans mark England’s historic win over Germany in the Euro 2022 final.

The Queen and the Spice Girls are among those who have sent messages to the Lionesses, who have claimed England’s first major trophy since the men’s side won the World Cup in 1966.

‘Warmest congratulations’ from the Queen

Her Majesty weighed in on the celebrations, sending a message to the Lionesses.

“The championships and your performance in them have rightly won praise,” she said. “However, your success goes far beyond the trophy you have so deservedly earned. You have all set an example that will be an inspiration for girls and women today, and for future generations. It is my hope that you will be as proud of the impact you have had on your sport as you are of the result today.”

Prince William, who is president of the Football Association and watched the match live at Wembley, described the match as “sensational”, adding “the whole nation couldn’t be prouder of you all”. 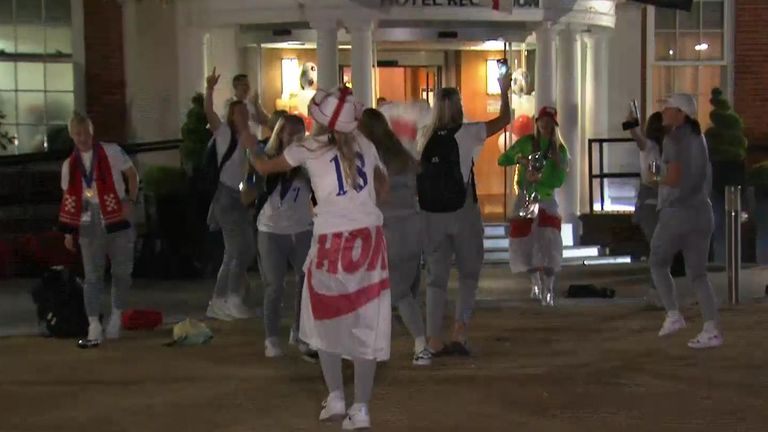 Former England and Arsenal defender Alex Scott struggled to speak as the players celebrated their win on the Wembley pitch.

“This is a dream, an absolute dream for every young girl that dreamt of playing football. It’s incredible,” she said.

“Every single player has played a part. Nikita Parris, who came on at the end, came on to do a job for the team and the way teams play as a whole determines its success.”

England teammate Jack Grealish said Lioness Chloe Kelly was “unbelievable”, while former England footballer Michael Owen said the win was “thoroughly deserved”, adding that the Lionesses are a “credit to the nation”.

Pop star Adele described the achievement as a “game changer” and shared a photo of the Lionesses celebrating their win on Instagram, writing: “You did it!! It’s come home!!”

Rolling Stones guitarist Ronnie Wood also said that the Lionesses had “made us all so proud” as he congratulated them. He added: “What an incredible result! Thank you forever!”.

While comedian Miranda Hart revealed she was emotional over the victory, writing: “Crying. So brilliant. So important. Too emotional to articulate more”.

“Coming in as captain, I think she’s been a phenomenal leader.”