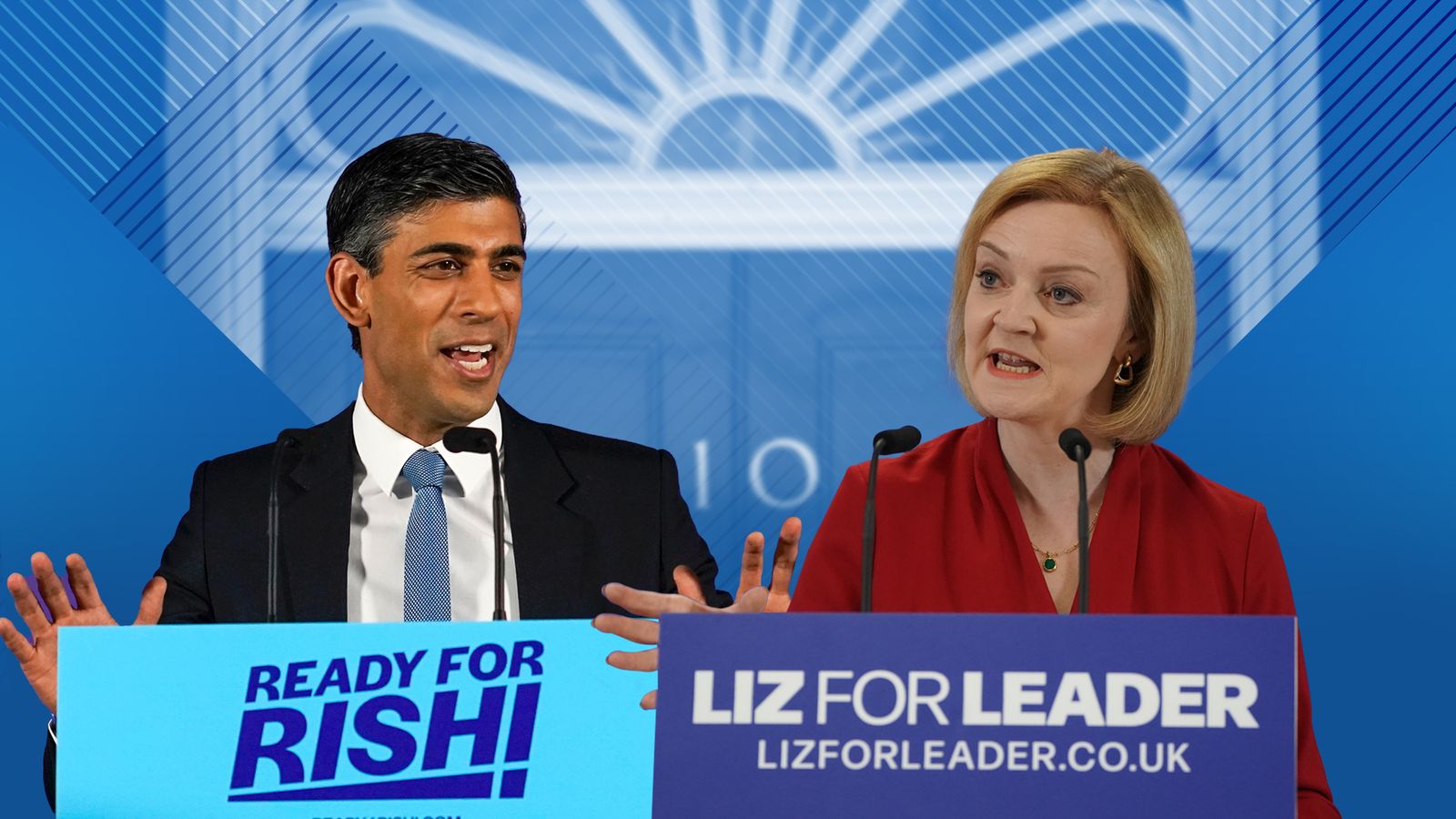 Liz Truss has received a fresh boost in her bid to become the next Conservative leader as she and rival Rishi Sunak prepare to face the cameras on Sky News this evening.

A new survey of Conservative Party members by ConservativeHome released on Wednesday found Ms Truss is most likely to become the next prime minister – with 58% of those asked backing her.

It is the second poll in less than 24 hours showing the gap between the foreign secretary and Mr Sunak widening.

But Ms Truss told supporters she is “not taking anything for granted” and a backer of Mr Sunak, Tory MP Mel Stride, said it was “all to play for”.

He told Sky News: “We know through our MPs working amongst their membership is that Rishi’s position is far stronger than many are imagining.

As the leadership race continues to heat up, the candidates will once again face the cameras this evening on Sky News at 8pm.

The Battle for Number 10, which will come live from Sky Studios in west London, will see Ms Truss and Mr Sunak take part in back-to-back questioning from the studio audience made up of undecided Conservative Party members, before facing an in-depth interview with Kay Burley.

Mr Sunak will be battling to make up ground during what is a key week in the contest for the keys to Number 10 after the latest blow to his campaign – former health secretary and unsuccessful Tory leadership candidate Sajid Javid endorsing his rival Ms Truss.

Writing in The Times, Mr Javid said Mr Sunak’s refusal to cut taxes meant the UK risks becoming a “middle-income economy”, while Ms Truss had the “willingness to challenge the status quo”.

Mr Javid is the second former leadership candidate to throw their support behind the foreign secretary this week after Penny Mordaunt declared her support on Monday.

A YouGov poll of Conservative members released on Tuesday also showed Ms Truss extending her lead over Mr Sunak to 34 points in the Tory leadership race.

The survey, carried out for The Times, found that 60% of party members are now saying they will vote for the foreign secretary to succeed Boris Johnson as prime minister, compared to just 26% for former chancellor Mr Sunak.

A spokesperson for Ms Truss’ campaign said the polls show “Liz’s vision for the UK is resonating with members”.

Truss ‘not taking anything for granted’

Yesterday, both leadership hopefuls took part in the latest hustings which were held in Cardiff.

Ms Truss told the audience “there is still a long way to go in this leadership election”.

In the first turbulence for her campaign, Ms Truss was forced to U-turn on a plan to link public sector pay to regional living costs.

On Monday night, the leadership race frontrunner said she would save £8.8bn by introducing regional pay boards instead of national ones to set salaries for civil servants, reflecting where they lived.

But experts warned that to reach the sum, the plan would have to branch out further than government departments, with the likes of teachers, nurses, and police officers also receiving lower pay than workers in the south.

It led to outrage from Conservative MPs, and by lunchtime on Tuesday – less than 24 hours later – Ms Truss’ team had released a statement saying the policy would not be taken forward.

Mr Sunak welcomed her U-turn, saying it would have meant “almost half a million workers in Wales getting a pay cut”.

“I don’t think cutting the pay of hundreds of thousands of workers here – and indeed across the regions of the United Kingdom – is a Conservative policy that we should adopt and I’m glad that she’s changed her mind,” he told the audience in Cardiff.

Elsewhere during the hustings, Mr Sunak hinted he would consider abolishing inheritance tax if he became prime minister.

He told the crowd that it was “not what he set out a plan to do”, but it was something he could look at.

“I’ve set out a plan to consistently cut income tax over time because I want to reward hard work. But I very much, as you heard from my earlier remarks, I’m someone who believes in supporting aspiration,” the former chancellor said.

“I think that is a Conservative value that many of us in this room will hold dear and inheritance tax is a way to do that.

“So, over time, is that something that we should look at? Of course, we should, because people who are working hard should be rewarded for that.”

0:26 The Battle for Number 10 will see both candidates answer questions from undecided Conservative Party members.

The pair exchanged further barbs over their tax plans later in the evening – a running theme in the contest – ahead of the Bank of England announcing its latest interest rates later today.

Mr Sunak said there was “much in common” between him and Ms Truss as “both of us want to reduce taxes”, but he said “timing is everything”.

He added: “If we rush through premature tax cuts before we have gripped inflation all we are doing is giving with one hand and then taking away with the other.

“That would stoke inflation and drive up interest rates, adding to people’s mortgage payments. And it would mean every pound people get back in their pockets is nothing more than a down payment on rising prices.”

In a boost for Mr Sunak’s campaign, former chancellor Nigel Lawson also warned that financial policy proposed by Ms Truss risks a repeat of the spiralling inflation of the 1970s.

Mr Lawson, who has previously endorsed Mr Sunak, told The Telegraph: “We saw the impact of rising prices, crippling the economy and putting millions out of work.

“Savings were eroded and investment collapsed. I am profoundly concerned that we are in danger of repeating the mistakes of that decade.”

But Ms Truss reiterated her mantra of the contest that “we cannot tax our way to growth”.

She added: “Modest tax cuts – including scrapping a potentially ruinous corporation tax rise that hasn’t even come into force – are not inflationary.”

One of her backers, former leadership contender and Attorney General Suella Braverman, said the UK has got “the highest tax burden in 70 years”.

“If we cut taxes, we’re going to free up businesses to invest more in their research and development, employ more people, lower their costs and that’s only going to be good for the economy.

“Cutting taxes is the necessary step to take, and that’s why Liz is the right person to lead us through these economic challenges.”

Meanwhile, both candidates were also asked at the hustings to describe themselves in three words.

‘The Battle for Number 10′ will be broadcast live for 90 minutes and for free on Sky News channel 501, on Freeview 233, on Sky Showcase channel 106, and across Sky News’ digital channels. 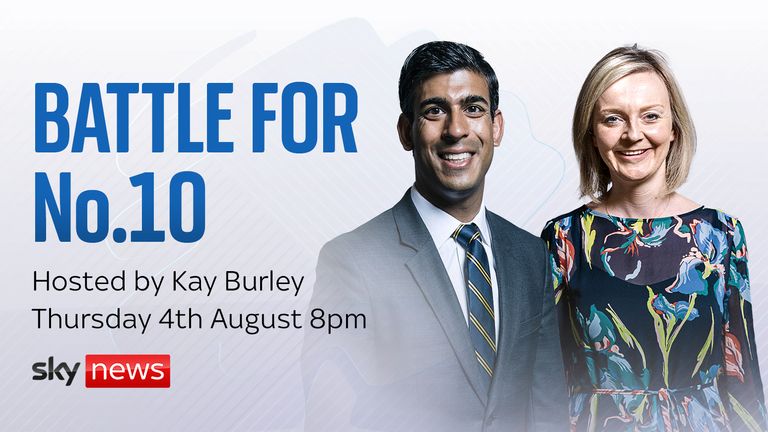