UK economy to be in recession for more than a year, Bank of England warns as it hikes rates The UK economy will be plunged into recession for more than a year this autumn as rising energy prices push inflation above 13%, the Bank of England has warned.

In a bleak outlook for consumers and business, the bank forecast five quarters of economic contraction and a 5% fall in real-terms living standards, and increased interest rates by 0.5 percentage points, the largest single rise in 27 years.

The bank’s Monetary Policy Committee voted 8-1 to increase the base rate to 1.75%, an attempt to prevent the inflationary impact of soaring energy prices being compounded by domestic price and wage pressures.

The interest rate increase will add around £650 to annual repayments for those with an average tracker mortgage. The increase in monthly tracker repayments for homeowners since rates began rising from a low of 0.1% last December is around £170.

The savage inflation rate, the highest since September 1980, is being driven by the rising cost of wholesale gas on international markets, which has doubled since May and is on course to treble domestic energy bills.

Read more: Why is the Bank of England adding to my bills by raising rates?

The bank believes that the domestic energy price cap will reach £3,500 per household in October, prompting inflation to peak at 13.3% in the fourth quarter of this year and remain above 10% until the middle of next year. It’s forecast to fall back marginally to 9.5% in the third quarter and 5.5% by the end of the 2023.

The domestic energy price cap is expected to increase again when regulator Ofgem reviews the figure in January, but the MPC believes the inflationary impact will be offset by falls in other areas. It says goods price inflation may have peaked, and commodity prices are already beginning to fall back. 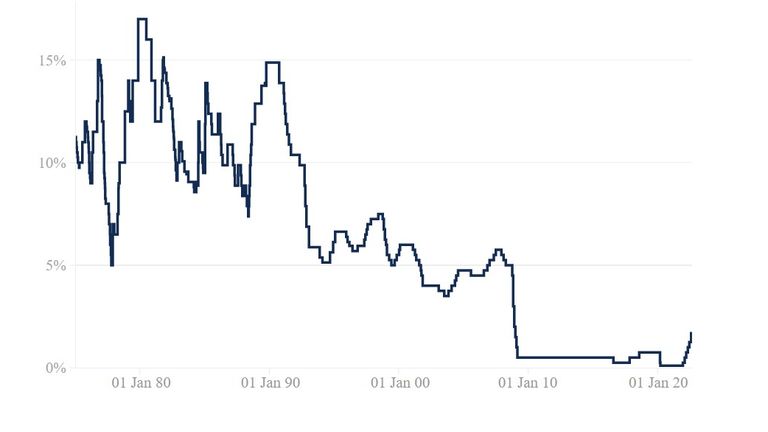 Real living standards to fall, despite support for energy costs

Real living standards, even after the impact of direct government support for energy bills of at least £400 per-bill payer, are forecast to fall by 1.5% this year and 2.25% next year, with a 5% decline from peak to trough.

A five-quarter recession ending in the first quarter of 2024 would be comparable in length to the downturns of 2007-08, the early 1990s and the early 1980s, but would be shallower than the financial crisis with a peak-to-trough decline in GDP of 2.1%.

The bank’s Monetary Policy Committee said energy prices are responsible for the majority of the rise in inflation, with continued COVID supply chain disruption the other significant factor.

Wages to rise but recession could result in higher unemployment

The MPC forecast that wages will rise 6% this year as employers battle to recruit and retain staff, but warned that as the recession bites unemployment could begin to rise next year from the current 3.8%, peaking at 5.5%.

Read more:
Energy price cap to remain above £3,500 through most of 2023, report warns
Should workers outside London and the South East be paid less? How inflation hits different parts of the country 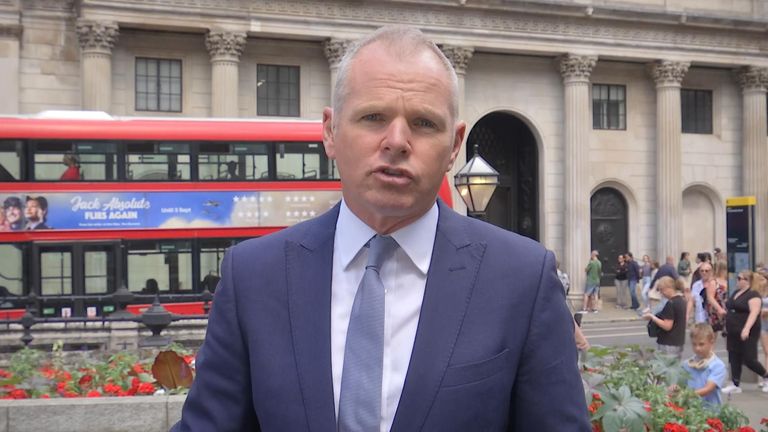 Explaining its reasoning for the rate increase, the minutes of an MPC meeting said: “The United Kingdom is now projected to enter recession from the fourth quarter of this year. Real household post-tax income is projected to fall sharply in 2022 and 2023 while consumption turns negative.

“The labour market remains tight, and domestic cost and price pressures are elevated. There is a risk that a longer period of externally generated price inflation will lead to more enduring domestic price and wage pressures.

“In view of these considerations, the committee voted to increase the Bank Rate by 0.5 percentage points, to 1.75%.”

Chancellor of the Exchequer, Nadhim Zahawi, said: “Along with many other countries the UK is facing global economic challenges and I know that these forecasts will be concerning for many people.

“Addressing the cost of living is a top priority and we have been taking action to support people through these tough times with our £37bn package of help for households, which includes direct payments of £1,200 to the most vulnerable families and a £400 discount on energy bills for everyone.

“We are also taking important steps to get inflation under control through strong, independent monetary policy, responsible tax and spending decisions, and reforms to boost our productivity and growth. The economy recovered strongly from the pandemic, with the fastest growth in the G7 last year, and I’m confident that the action we are taking means we can also overcome these global challenges.”

‘Proof the Tories have lost control of the economy’

Rachel Reeves, shadow chancellor,said the forecast was “further proof that the Conservatives have lost control of the economy”.

“As families and pensioners worry about how they’re going to pay their bills, the Tory leadership candidates are touring the country announcing unworkable policies that will do nothing to help people get through this crisis.

“Labour would help households right now by removing the tax breaks that are subsidising oil and gas producers and using that money to help people now, including by cutting VAT on energy bills.

“And with our Climate Investment Pledge and plan to buy, make and sell more in Britain, a Labour government will build the strong, secure and fair economy we need.”

Cost of living: How interest rate rise will impact your mortgage bill