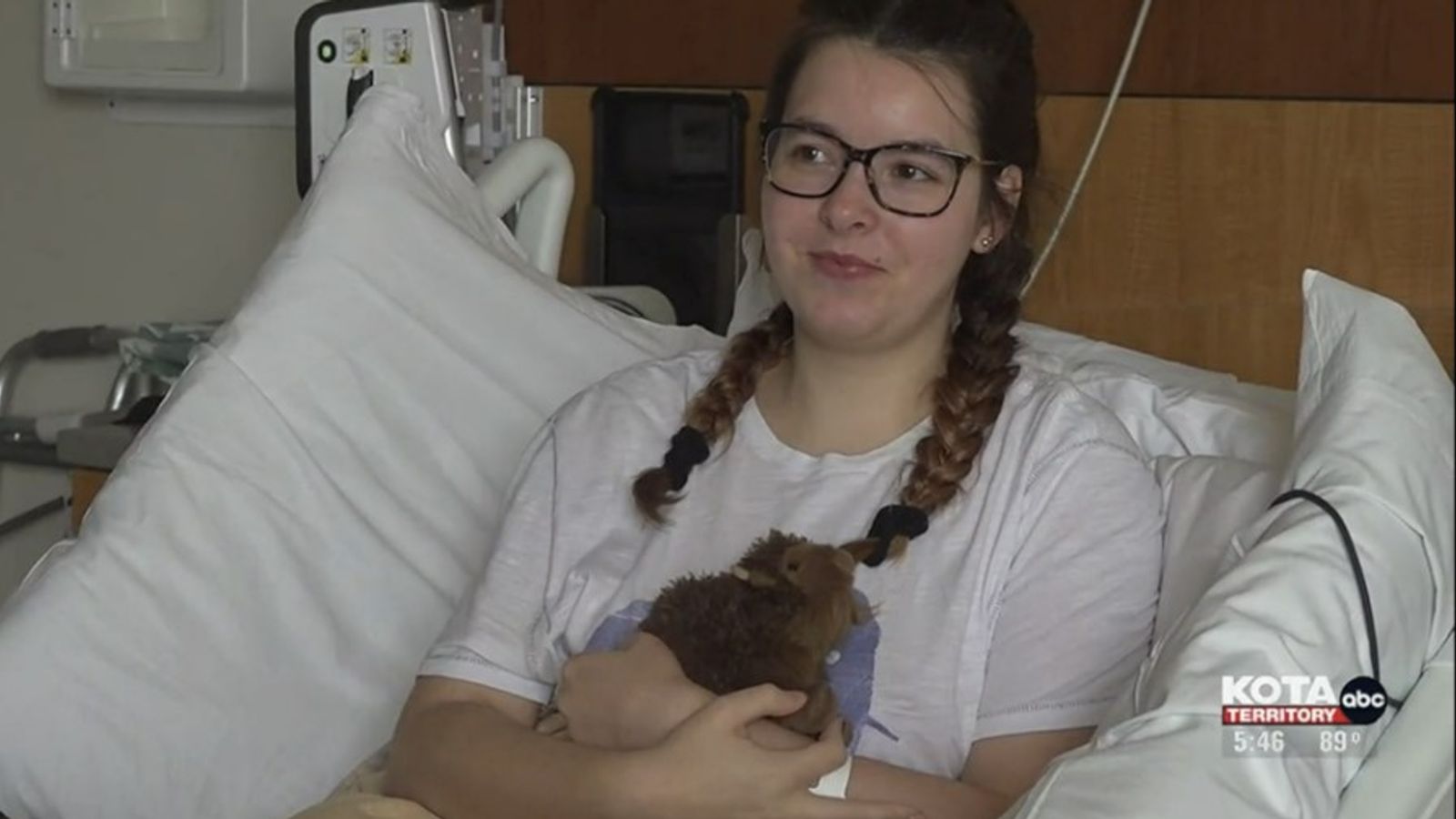 A British student has been left unable to walk after being attacked by a bison at a nature reserve in South Dakota.

Amelia Dean, 19, was on the second day of a month-long road trip across the US when the male bison suddenly charged at her at Custer State Park.

The animal gored the teenager in her left thigh with its horn before catapulting her “head over heels” about 10-15 feet in the air.

Her parents, Matthew and Jacqueline, said “it is a miracle she is still alive” after her terrifying ordeal.

Amelia, known as Mia, was hiking with a friend and his dog when she came face to face with the bison on 16 June.

Speaking from her hospital bed at Monument Health in Rapid City, South Dakota, she described the experience as “surreal”.

“We weren’t doing anything that really warranted (the attack),” she told local broadcaster KOTA-TV.

“We were just having a walk in the park.”

The bison initially appeared to be unconcerned by the presence of the group. But it charged moments later, halting directly in front of Amelia, reportedly from Surrey, and staring her out before surging forward.

She was trapped as she hit the ground, with the bison “huffing over her”, its feet inches from her head.

“I remember feeling the pressure on my hip,” she said. “My hip being pushed back, and I remember the sensation of flying in the air and going head over heels.”

Amelia’s friend eventually managed to lead the buffalo away and called the emergency services.

She suffered extensive injuries, including a severed femoral artery and severe damage to her tibial and peroneal nerves – which are part of the sciatic nerve.

‘Beyond fortunate’ she is alive 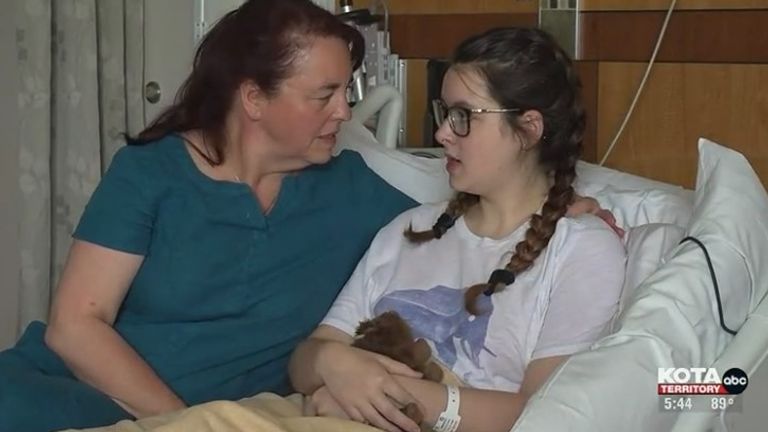 Her parents said they were “beyond fortunate” their daughter had not died from blood loss after waiting 20 minutes for an ambulance.

Amelia is passionate about dance, her parents said. She took a gap year to travel after being accepted on a degree course at Edinburgh University, due to begin in September. 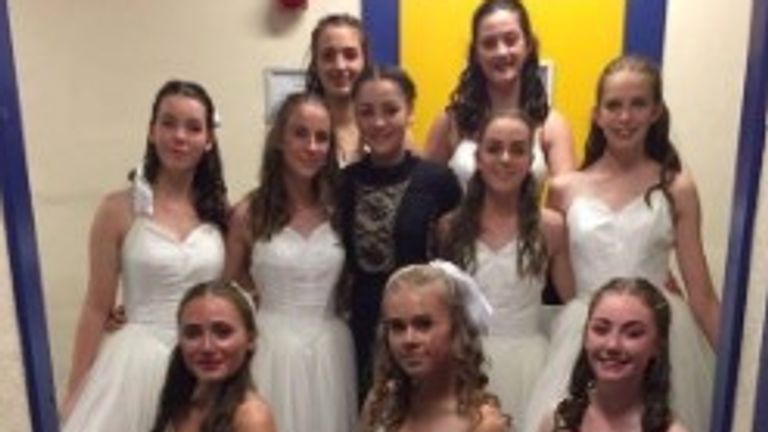 Image: Amelia (middle row, left) about to perform in Phantom Of The Opera. Pic: GoFundMe

Seven weeks after the attack, although the artery and muscle damage is healing, Amelia is unable to walk unaided and continues to suffer severe nerve pain, numbness, hypersensitivity, paralysis, and limited mobility below the knee.

She will need at least one operation in the hope of regaining full mobility after her “highly complex injury”.

But the hospital is unable to perform the procedure – and the cost is not covered by the family’s insurance.

‘Time is running out’ for treatment 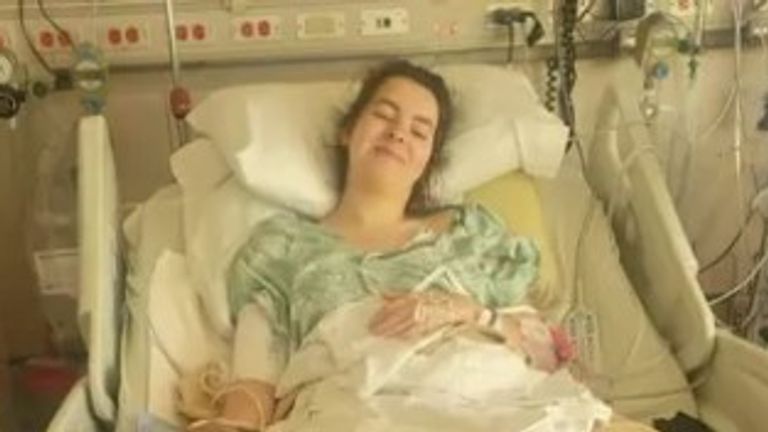 Now, Matthew and Jacqueline have launched a GoFundMe page in the hope of raising the money to pay for Amelia’s treatment at Mayo Clinic, a global leader in the peripheral nerve field.

They wrote: “This could be Mia’s best chance to regain control of her foot, and time is running out.

“The initial tests alone cost around $8,000, not including transport, accommodation and other expenses, the later flights home, or any possible surgeries needed.

“We are therefore asking to raise money to allow Mia to receive at least the initial testing and possible surgery at Mayo clinic.”

The couple have also praised their daughter’s strength in the face of adversity.

“She has been incredibly strong throughout this whole process, coming close to death, continuing to suffer now and yet remaining positive,” they said.

“We simply wish for her to be able to walk and dance again and live her life to the full, without chronic long-term pain.”

Felixstowe strike: Workers at UK’s biggest container port to walk off the job for eight days