People told to grass on neighbours who flout hosepipe ban 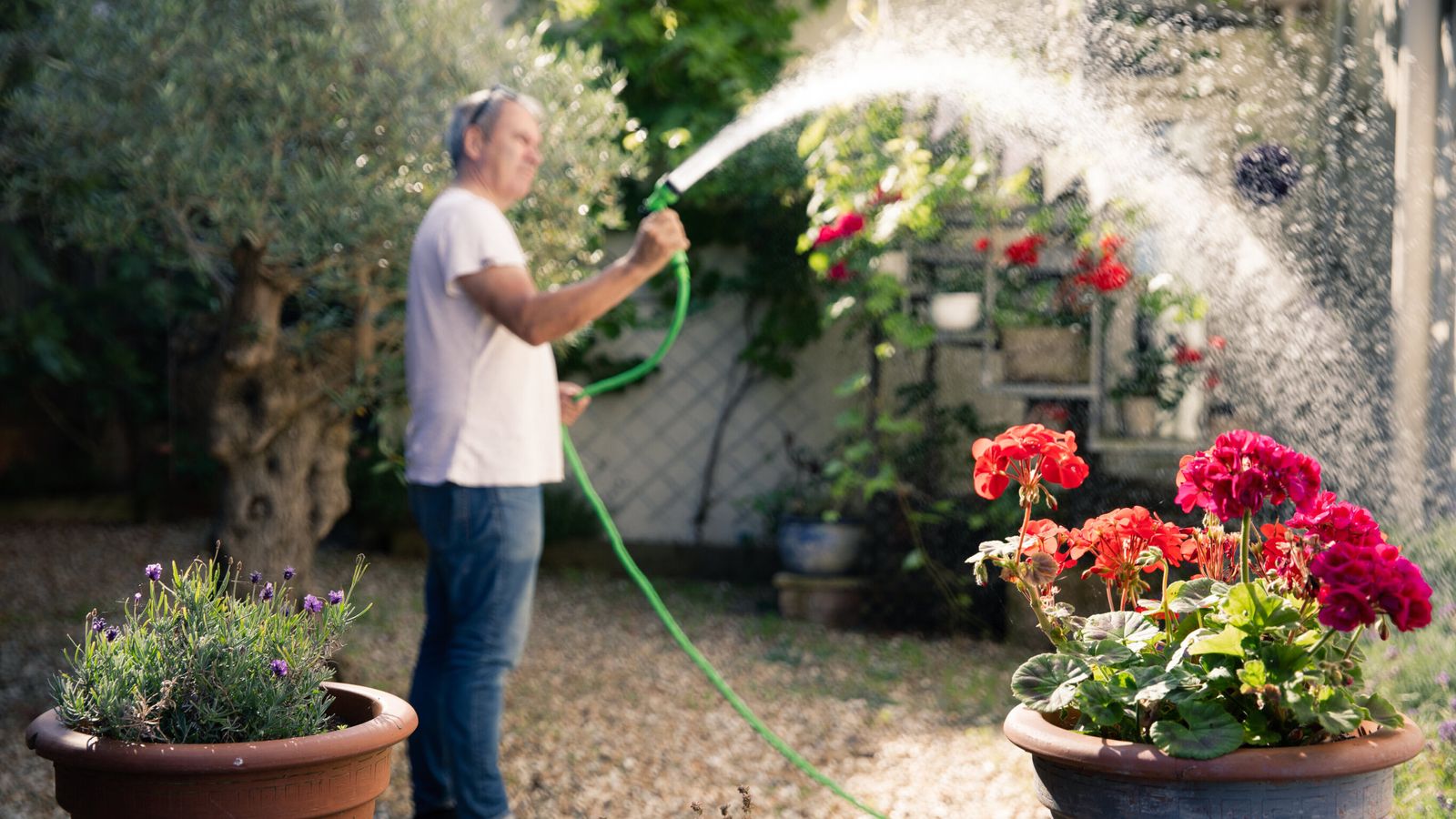 People have been told to grass on their neighbours if they catch them repeatedly flouting a hosepipe ban.

Anyone taken to court for persistent breaches of restrictions on hosepipe bans – including to water a garden, clean a vehicle, or wash windows, walls, paths, and patios – faces a fine of up to £1,000.

Filling up a paddling pool, domestic pond or ornamental fountain is also prohibited.

But the measures, officially known as Temporary Use Bans (TUBs), will no doubt leave gardeners dismayed as they desperately try to save their sun-scorched plants from wilting in the heatwave.

Which areas are affected by the hosepipe bans? 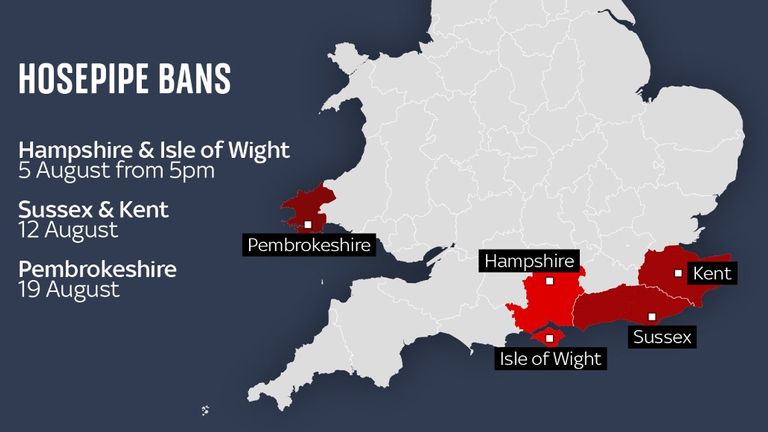 Image: A map of the confirmed hosepipe bans in England and Wales

A hosepipe ban will come into force from 5pm today (Friday, 5 August) in Hampshire and the Isle of Wight – the first to be imposed in the region since 2012.

South East Water has also announced a ban for its customers in Kent and Sussex from 12 August.

Meanwhile, Pembrokeshire in Wales will also be hit by a hosepipe ban from 19 August.

Parts of England have seen the driest July in records dating back to 1836, following the driest eight-month period from November 2021 for the country since 1976.

It also comes as the Met Office has warned there is “very little meaningful rain” on the horizon for parched areas of England as temperatures are set to climb into the 30s next week.

Find out the weather forecast for your area 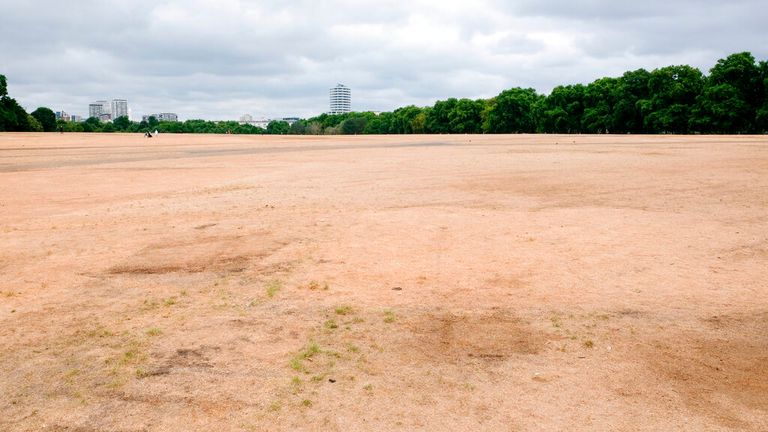 Image: Large swathes of Hyde Park in London have dried-up

People asked to ‘gently remind’ others about water restrictions

Other firms have so far held off bringing in restrictions despite low water levels, though some say they may need to implement bans if the dry weather continues.

Householders who have not yet been hit by restrictions are being urged to avoid using hosepipes for watering the garden or cleaning the car.

Southern Water stressed there was no risk to the overall water supply, but the ban was needed to protect the environment during one of the driest years on record, accompanied by record temperatures.

However, the company has encouraged people to “gently remind” neighbours of the rules.

A spokesperson said: “If you see anyone breaching the restrictions, please let us know via our customer service team.

“A fine of up to £1,000 can be imposed for any breaches. We would like to thank all our customers for supporting these restrictions and for doing your bit to protect your local rivers.”

Any fine imposed would be handed down via the courts.

Dr Alison Hoyle, director of risk and compliance at Southern Water, said: “We haven’t taken this decision lightly, and we know the temporary use ban will have an impact on our customers.

“We’re asking everyone in Hampshire and the Isle of Wight to do their bit by supporting these measures and only use the water that they need.”

Read more:
What uses the most water in our homes?
Another heatwave brewing for parts of UK next week 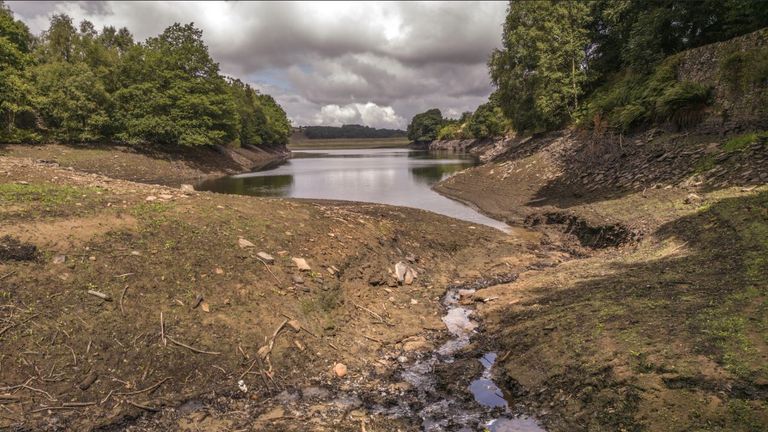 Tens of thousands of people in Pembrokeshire will be subject to water restrictions after the county saw just over 60% of expected rainfall between March and July – prompting Welsh Water (Dwr Cymru) to introduce a hosepipe ban from 19 August.

Managing director of water services Ian Christie said: “We have not seen such prolonged dry conditions in Pembrokeshire since 1976.

“Introducing the hosepipe ban is not a decision we have taken lightly, however if we are to make sure there is enough water to see us through the rest of the summer and into the autumn then we need to act now to try to prevent any further restrictions later on.”

The ban will apply to just over 2% of Welsh Water’s three million customers, with no plans currently to introduce wider restrictions, the company said in a statement.

Advice for gardeners on which plants to save

New plants should be prioritised over those which are more established, says senior horticultural adviser at the Royal Horticultural Society, Nikki Barker.

“I might sound a bit old school, but I water the young plants for the first two to three weeks, then I let them fend for themselves. They can wilt during the day, but they are back again by nighttime, and it encourages root growth.”

• Prioritise younger over more established plants – create a timeline and work backwards
• Anything planted at least three years ago should have deep enough roots to recover
• Don’t waste water on lawns – grass is “resilient” and will grow back
• Do not use grey water if it contains bleach or disinfectant
• Try re-using “grey water” from the bath or washing up on hanging baskets and ornamental plants – but not edible plants, fruit, or vegetables