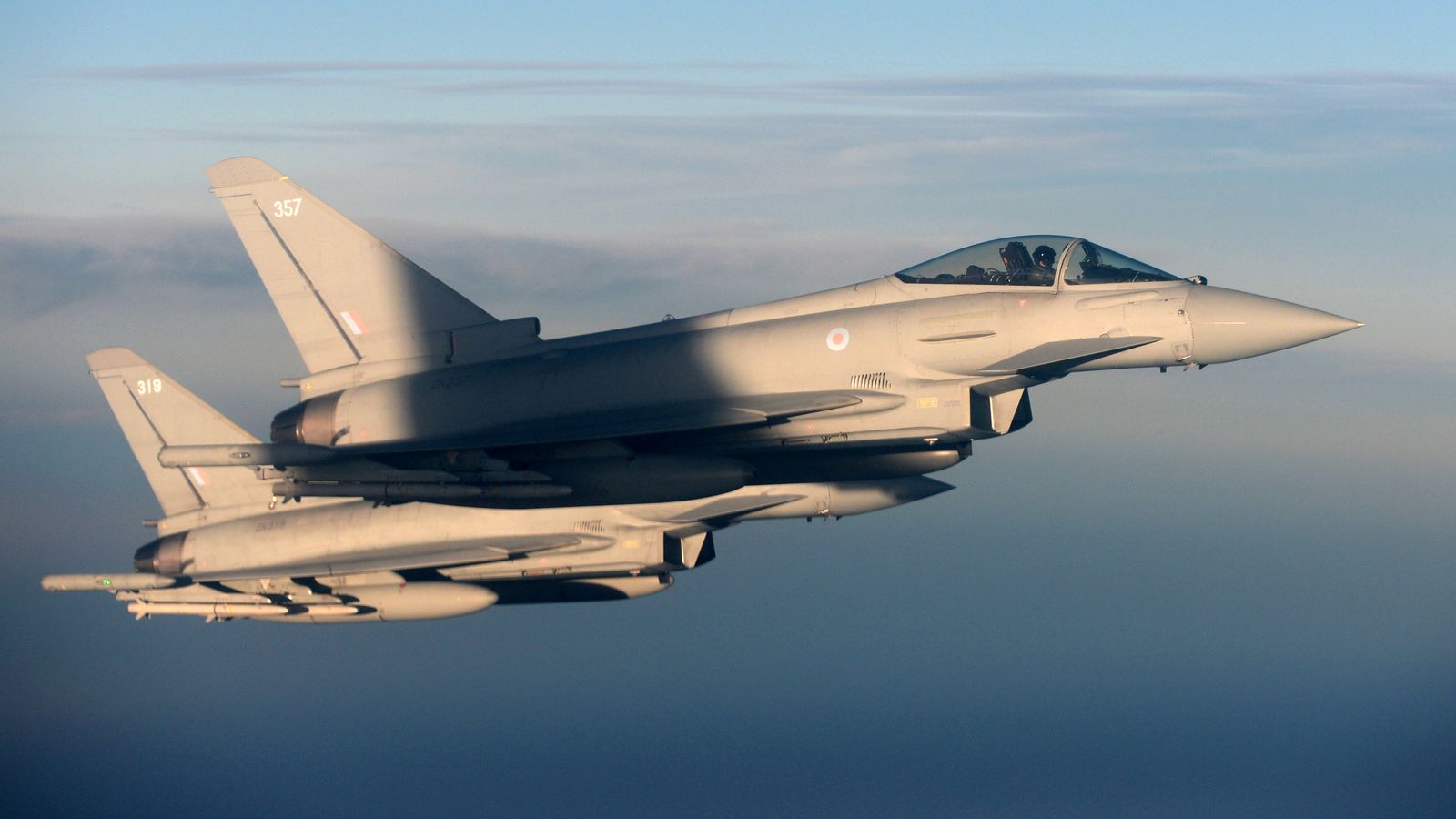 The UK’s ability to train fast jet pilots is in crisis because of faulty aircraft, a need for more instructors and an influx of foreign students filling up the course, leaked documents suggest.

The delays could hamper the future availability of crews to operate frontline Typhoon and F35 squadrons at a time of growing threats from Russia and China and with a war raging in Europe, defence sources said.

Pilots earmarked to train on other aircraft, such as military transport planes and helicopters, are also suffering. Royal Navy and army aviators are impacted too.

The backlog is so grave, the RAF is considering asking up to 30 of its recruits to quit voluntarily, one internal note said. It warned of a “reputational risk” if air chiefs took such a step. There is no suggestion of any forced redundancies.

An internal memo from May and slides from a meeting of top RAF officers in July, seen by Sky News, reveal:

• An “emerging” problem with the Rolls-Royce engine on the Hawk jet, used by fast jet recruits for training. It will “reduce pipeline capacity over the next three years”. This will increase waiting times for some trainees to join the course to about 12 months;
• Concern about a “damaging drain” of qualified pilots who quit the RAF for better-paid jobs in industry, rather than staying in frontline or instructor roles. One slide said: “The draw is so great from such a small pool we are approaching a critical mass point”. But an RAF source said there was no “mass exodus”;
• A commitment by the UK to train pilots from places like Qatar and Saudi Arabia as part of a deal to sell the country’s Typhoon jets is absorbing already limited training space. This has made a number of RAF pilots wait longer to join the Operational Conversion Unit, which is the final stage of their training, a defence source said;
• Despite having 43 slots, only 11 trainee UK pilots are scheduled to go through the conversion stage of fast jet training to learn how to fly an F35 or a Typhoon this year.

A serving officer with knowledge of the training pipeline said: “At the moment, it’s the biggest f*** up in the RAF.”

Asking to stay anonymous, they told Sky News: “To have a selection process that is second only to astronaut selection, so you’re getting the cream of the cream, and then make them complete their flying training over a six-to-eight-year process, when it should only take two-to-three years, is absolutely mad, especially when it is taxpayers’ money.”

He called the situation “a scandal… a crisis”, saying it has been a chronic problem for almost 30 years that air chiefs have consistently tried and failed to fix.

But a second, serving, RAF source defended the situation and strongly denied there was a crisis.

He said this year was always going to be a “challenge” as the air force prepared to retire a number of aircraft and bring in new platforms as part of modernisation plans. Image: A C17 Globemaster III aircraft of the Royal Air Force, transporting a shipment of Britain’s support package for Ukraine

Instructors forced to take to the skies

Russia’s war in Ukraine added additional pressure, with the RAF called upon to provide more fast jets and crews to patrol the skies of NATO allies in the east of the alliance.

It meant on one occasion, instructors at the Operational Conversion Unit at RAF Coningsby in Lincolnshire had to take time out to man the Quick Reaction Alert jets that scramble to protect UK airspace, impacting a couple of training courses that had to be rescheduled.

The source said a senior group of RAF officers meet three or four times a year to consider all training issues.

This was so “in the dynamic market and dynamic world of training – and all of these challenges of multiple aircraft having different things going on or off with them – that we do this effectively on a regular basis, not wait for the problem to arrive”, the source said.

“We’re trying to get upstream and manage people’s lives and help them through their career.”

An RAF spokesperson said: “Whilst we acknowledge there are challenges with the training pipeline, we are working across defence, with industry and our international partners to improve the training experience and results for our personnel, including recruiting more instructors and actively managing timeframes for training.

“We continue to have sufficient aircrew to meet our operational commitments.” The leaked documents offered a sense of the scale of the challenge.

Some 347 trainees – more than half of 596 personnel in the total flying training system, including army and navy aviators – are waiting for a slot on a training course or are on a “refresher” course. Students must refresh their skills when the delay to progress to the next phase in their training is so bad that they are no longer current in what they already know.

Waiting times for flying courses vary depending on the type of aircraft.

The memo said some 80 personnel will have to wait three-and-a-half years to gain multi-engine training, which is needed to operate transport aircraft such as the A400m and the C-17 and spy planes like the Rivet Joint and Poseidon submarine hunter. Separately, there is a wait of between two-to-three years to learn how to fly a Chinook helicopter.

The delays have left dozens of personnel – dubbed “holdies” because they are on hold for a training course – dotted around RAF bases, other military headquarters and even at the Main Building in the Ministry of Defence in London.

The RAF source said a lot of effort is being made to ensure those waiting are not wasting their time working a photocopier. Problems ‘date back to end of Cold War’

The source offered examples of some officers being sent on Russian or Arabic language courses and others learning how to be an air traffic controller. This “gives everybody professional qualifications that are wider than those ones they were expecting.”

But the delays also mean the average age of a newly-qualified pilot across the RAF has risen to 29 from early-to-mid 20s, changing the demographics of the service.

This could have “significant implications for future professional development, reach and retention”, one of the documents warned.

The defence sources said today’s training woes can be traced back to the end of the Cold War, when successive governments sought to cut defence spending, cashing in on a so-called “peace dividend” and the false hope that Russia would no longer pose a threat.

The size of the RAF, army and Royal Navy, was repeatedly shrunk, including the number of pilots and warplanes, with frontline squadrons dropping to seven from around 30.

At the same time, plans were drawn up to privatise much of the military’s flying training. 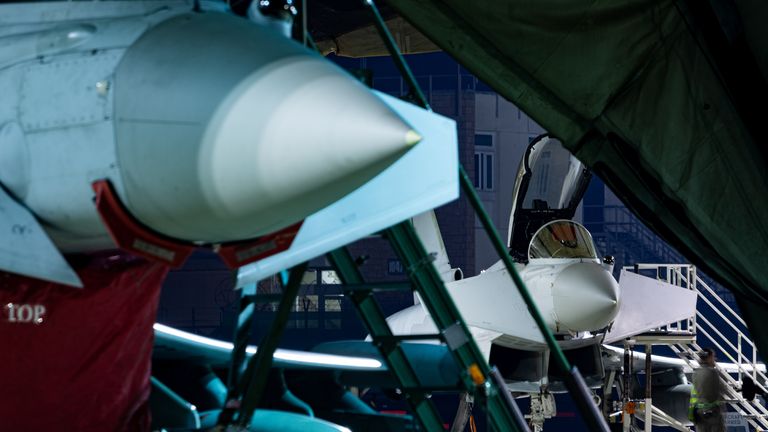 In about 2008, a joint venture called Ascent, comprising the US defence giant Lockheed Martin and its British counterpart Babcock, secured an initial 25-year contract to deliver what is known as the Military Flying Training System (MFTS).

It is required to train a set number of recruits in different specialisms, including fast jets, multi-engines – such as spy planes and transport aircraft – and helicopters.

But the defence sources said the RAF – under Treasury pressure – kept changing its mind about the size of the training pipeline following a 2010 defence review that imposed further, painful cuts across the armed forces and a 2015 review that adjusted the levels slightly.

Sky News understands that some officers around that time favoured paying a bit more to keep some spare training capacity to give the RAF the ability to surge in new pilots should a future government think the air force had been cut too deeply.

It would also create resilience to absorb the impact of any glitches with training courses.

When not required, the extra training slots could be filled by foreign crew as part of multi-billion-pound deals to sell British-made Typhoon jets to international partners – a win-win.

However, the defence sources said that others within the RAF disagreed, instead prioritising the Treasury-led need to reduce spending and opting for a contract to train the minimal viable number of pilots.

They won the argument but appear to have created a system that is struggling to deliver the pilots needed in peacetime, let alone were the UK again to go to war.

“The system has been pared back to only work if everything turns out perfectly,” the senior, former RAF officer said. “It is a system that only works if you keep throwing sixes.”

Felixstowe strike: Workers at UK’s biggest container port to walk off the job for eight days