Review by Jane Lythgoe for The Hitmix 107.5

We have been waiting for this play for a long time, seeing Neil at the New Vic Theatre quite regularly, and always hearing him say ‘I hope you will be coming to my play’.  How could we not!!

A cast of seven Neil’s went through the various stages and events in Neil’s life, all transforming effortlessly from character to character -Suzanne Ahmet, Charlie Bence, Gareth Cassidy, Alex Frost, Jerone Marsh-Reid, Daniel Murphy and finally Michael Hugo emerging as ‘The Real Neil’.  Which was odd, because the ‘real’ real Neil was in the audience

Michael Hugo, who is a regular at the New Vic, was unrecognisable.  He had transformed into Neil Baldwin and he played the part remarkably.  Neil’s innocence and uncomplicated view on life were portrayed to perfection. 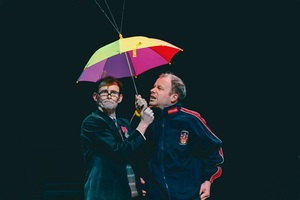 There were some poignant moments like the circus boss who refused to pay Neil, the mocking by the Stoke players and the incident in the skip.  And his mother, played beautifully by Suzanne Ahmet, recognising that she may not always be around, and trying to prepare Neil for life alone.

And then, there were plenty of laughs, including the seemingly bottomless bag, the joyous baking scene, walking the wire, the egg on the head, the human cupboards … and of course the multi-talented Gareth Cassidy’s impressions, accents and characters. 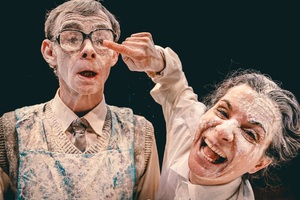 It is a very busy play with so much going on … probably due to Neil’s unusual and varied life – Stoke City Kit man and mascot, Nello the Clown, self-appointed official at Keele University, friend to many well-known people from sport, screen, politics, the church and even royalty.  Plus, Neil’s dreams of being the Manager of England one day and even Prime Minister.

And we the audience felt included throughout, with a box of chocolates doing the rounds and Neil even cadged a lift home from a man three rows back.

The wait is over …. and we were certainly not disappointed – quite the reverse – it is possibly the best performance we have ever seen at The New Vic for all round entertainment.  Largely because of the very clever interpretation of Neil Baldwins life by Theresa Heskins.  Maybe also because we know Neil, we know his remarkable story and we know the places he knows.  Neil has taken a decision to be happy … and we want him to be happy … we want his life to continue to be just Marvellous.